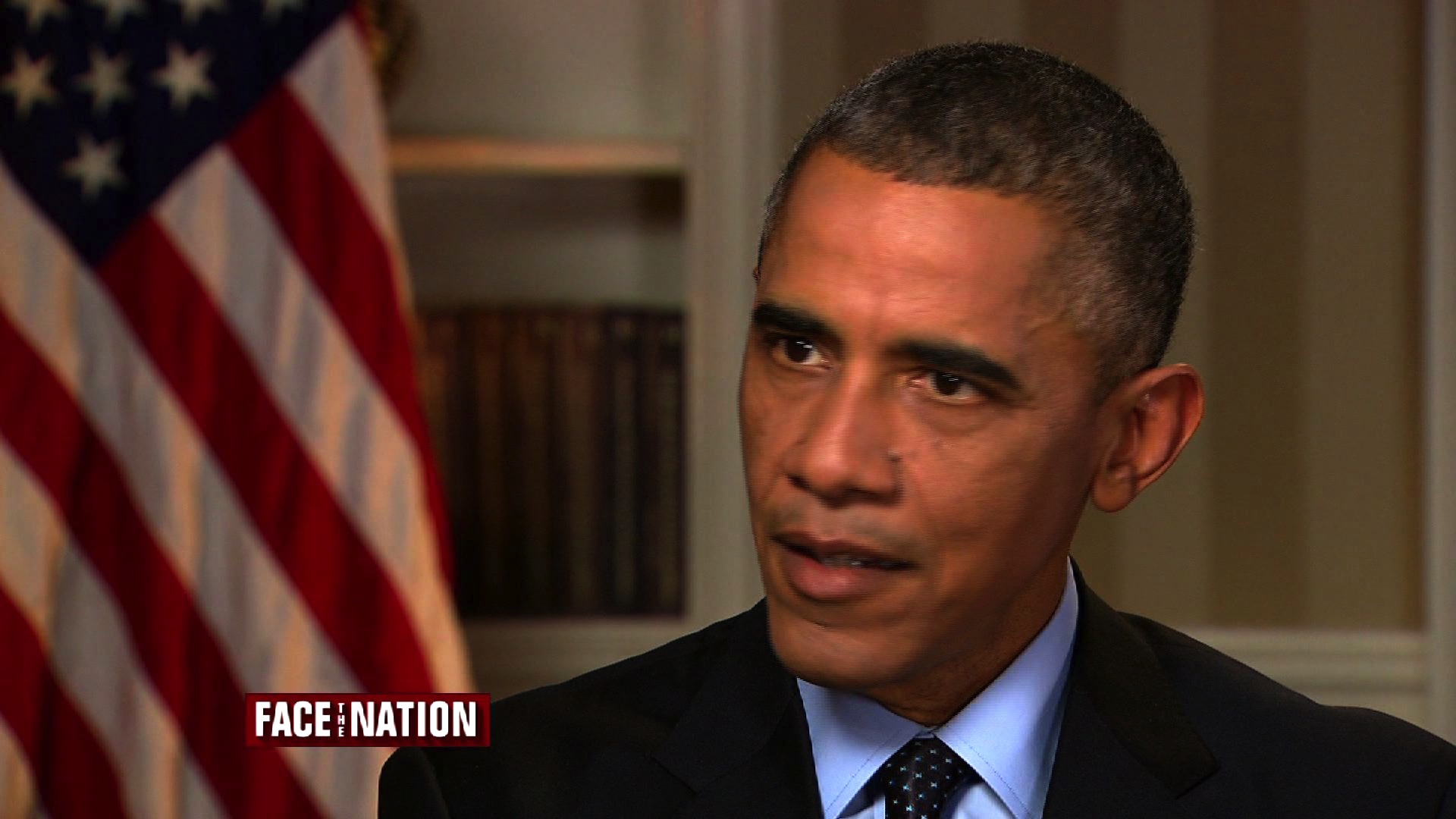 The decision to nearly double the number of American advisers deployed to Iraq "signals a new phase" in the fight against the Islamic State of Iraq and Syria (ISIS, or ISIL), President Obama said Sunday, but U.S. troops will still stay out of combat operations.

Mr. Obama sat down for a wide-ranging interview with CBS' News chief Washington correspondent Bob Schieffer on the 60th Anniversary of "Face the Nation."

"Rather than just try to halt ISIL's momentum, we're now in a position to start going on some offense. The airstrikes have been very effective in degrading ISIL's capabilities and slowing the advance that they were making. Now what we need is ground troops, Iraqi ground troops, that can start pushing them back," Mr. Obama said. "What hasn't changed is our troops are not going to be engaged in combat."

Instead, he explained, the new deployment of up to 1,500 soldiers will work at four training centers with members of the U.S.-led coalition to train Iraqi soldiers and assist them with the strategy and logistics to fight ISIS on the ground. When they begin to go on the offense against ISIS, the U.S. will provide close air support.

He said U.S. commanders have said that there will be fewer troops over time, not, less, as coalition members begin to help with the train and assist effort for local forces.

"We got beat," Mr. Obama said of last week's midterm elections that saw Republicans take control of the Senate.

The president's low approval rating, hovering around 40 percent, is seen as part of the reason Republicans were so successful on Election Night and now control both the House and the Senate.

"Whenever, as the head of the party, it doesn't do well, I've got to take responsibility for it," Mr. Obama said. "The message that I took from this election, and we've seen this in a number of elections, successive elections, is people want to see this city work. And they feel as if it's not working."

He defended parts of his record, arguing that the economy has improved with more than 200,000 jobs created in October and a fast-declining unemployment rate. Still , he said, people are frustrated that their wages haven't gone up and it's difficult to save for retirement or college educations.

"They see Washington gridlocked and they're frustrated. And they know one person in Washington and that's the president of the United States. So I've got to make this city work better for them," he concluded.

Schieffer noted that Mr. Obama does not seem to share the same zest for politics as previous presidents like Lyndon Johnson, Ronald Reagan, Bill Clinton and others, and asked whether he even liked politics.

"I love this job," Mr. Obama said. "Here's, I think, a fair statement: If your name is Barack Hussein Obama, you had to have liked politics in order to get into this office... I got into politics because I believed I could make a difference, and I would not have been successful and would not be sitting at this desk every day if I didn't love politics."

As evidence, he pointed to the 2010 passage of the Affordable Care Act, which, he said, would not have been possible "if there wasn't a whole bunch of arm twisting." And making progress on cutting the deficit also required cutting deals with Republicans, he said.

But he said he has learned some lessons on the way.

"It's not enough just to build a better mousetrap. People don't automatically come beating to your door. We've got to sell it. We've got to reach out to the other side and, where possible, persuade," he said.

Despite the difficulty of a long summer driven by a series of crises, from ISIS to another war in Gaza to the Ebola virus outbreak, Mr. Obama said he believed things were worse when he first took office in 2009.

"It was worse, because the economy not just here in the United States but globally was in a freefall. I have great confidence in the American people and I have great confidence in this administration being able to work through and eventually solve problems. Sometimes we don't do it at the speed that keeps up with, you know, the press cycle," he said.

He said his administration has "handled Ebola well" and also said no one recalls the 2010 oil spill in the Gulf of Mexico because "we actually had a really effective response."

"When you solve the problem, sometimes the cameras have gone away," he said.

The remainder of his presidency

Although presidents sometimes use big political losses as a cue to shake up their administration, Mr. Obama suggested that a staff reorganization may not be the answer.

"There are always going to be changes," he said. "We will be bringing in new folks here because people get tired. You know, it's a hard job. And what I've told everybody is...I want you to have as much enthusiasm and energy on the last day of this administration as you do right now or you did when you first started. Otherwise you shouldn't be here."

Among the potential new faces is Loretta Lynch, the U.S. Attorney Mr. Obama nominated Saturday to replace Attorney General Eric Holder, who is stepping down after six years.

But he also said that he will be looking for other ways to operate in the final two years of his presidency.

"I think that what you'll see is a constant effort to improve the way we deliver service to customers...experimenting with ways that I can reach out to Republicans more effectively. Making sure that we're reaching out and using the private sector more effectively," he said.

One likely area of conflict with the GOP is on immigration, where Mr. Obama has said he is still committed to taking executive action despite warnings by the Republican leaders not to do so. On Thursday, House Speaker John Boehner said unilateral action by the president will "poison the well" for legislative action by Congress.

Mr. Obama that after the Senate passed a bipartisan overhaul of the nation's immigration laws last year, he gave Boehner time for the House to work on the issue as well - but said that he had the legal authority to make improvements if they did not.

Still, he said there is a role for congressional action even if he does make unilateral changes to the system.

"Their time hasn't run out," he said. "The minute they pass a bill that addresses the problems with immigration reform, I will sign it and it supersedes whatever actions I take. And I'm encouraging them to do so," he said.

"If, in fact, a bill gets passed, nobody's going to be happier than me to sign it, because that means it will be permanent rather than temporary," he added.

In addition to domestic issues, Mr. Obama is still juggling several complicated issues overseas that will demand much of his attention in the next two years. Last week, it became public that he sent a letter to Iran's Supreme Leader Ali Khamenei in mid-October.

Mr. Obama would not address the letter, saying, "I tend not to comment on any communications that I have with various leaders."

He did say he is still committed to the talks aimed at getting Iran to abandon their nuclear ambitions, calling those negotiations "significant" and saying that Iran has so far abided by freezing their nuclear program.

"The question now is are we going to be able to close this final gap so that they can reenter the international community, sanctions can be slowly reduced and we have verifiable, lock-tight assurances that they can't develop a nuclear weapon. There's still a big gap. We may not be able to get there," Mr. Obama said.

He also said that the U.S. will not be "connecting in any way" the nuclear talks to the fight against ISIS, which Iran also views as an enemy because it is primarily a Sunni Muslim group.

"There is some de-conflicting, in the sense that since they have some troops or militias they control in and around Baghdad, yeah, we let them know, 'Don't mess with us. We're not here to mess with you. We're focused on our common enemy,'" he said. "But there is no coordination or common battle plan and there will not be."

Other issues like sponsoring terrorism and anti-Israel behavior will prevent the two countries from ever becoming "true allies," he said.

Mr. Obama also said that the U.S. still believes that Syrian President Bashar Assad needs to step down from power, despite the complex politics in the country's civil war that have ISIS fighting against Assad.

"It is still our policy, and it's an almost absolute certainty that he has lost legitimacy with such a large portion of the country by dropping barrel bombs and killing children and destroying villages that were defenseless, that he can't regain the kind of legitimacy that would stitch that country back together again," the president said.