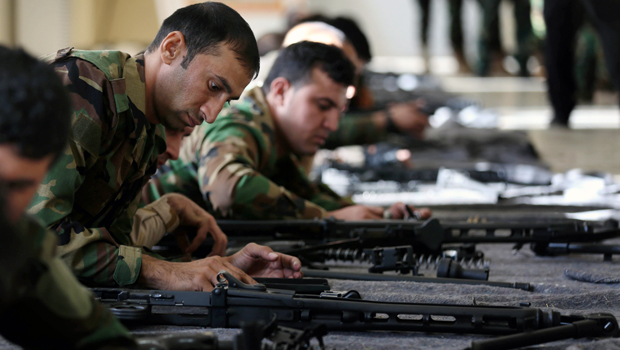 President Obama said up to 1,500 U.S. troops will go to Iraq in a major new deployment, almost doubling the number of American trainers and advisers there.

They'll be deployed to the north and west, where Iraq's military and Kurdish fighters are struggling to hold back the militants of Islamic State of Iraq and Syria, or ISIS.

CBS News correspondent Julianna Goldman reports the announcement came on the heels of the president's lunch with congressional leaders - their first meeting after Tuesday's midterm elections.

White House officials said the timing wasn't driven by the political calendar but that the request came from the Iraqi government and was refined over the last several weeks.

Administration officials say the additional troops and money are needed to expand the campaign against ISIS, also known as the Islamic State of Iraq and the Levant, or ISIL, and to build on the military's efforts to strengthen the local fighters who have been battling the terror group.

Pentagon spokesman Rear Adm. John Kirby said U.S. troops will also establish new training sites across the country beyond the Iraqi military facilities in Baghdad and Erbil, where U.S. forces have been operating.

"The Iraqis ... they have demonstrated the willingness and the skill to go after ISIL, so they've reached a point where they need additional help and guidance," Kirby said.

But, by authorizing another 1,500 military personnel, the president is doubling the number of advisers in Iraq who are training and equipping Iraqi and Kurdish security forces.

The price tag: $5.6 billion. And Mr. Obama is asking Congress to approve that before current funding runs out in December - and before Republicans take control of Congress next year.

The president told congressional leaders about the new plan at the White House Friday, and they were briefed by Gen. Lloyd Austin, the head of Central Command.

"I think there will be a lot of questions," said McCarthy. "It's just not presented, so we'll have to go through it."

The additional troops could be deployed as early as this month. In light of the election, the White House says it's an opportunity to work together with Congress to formulate and implement a broader strategy against the terror group in a bipartisan fashion.