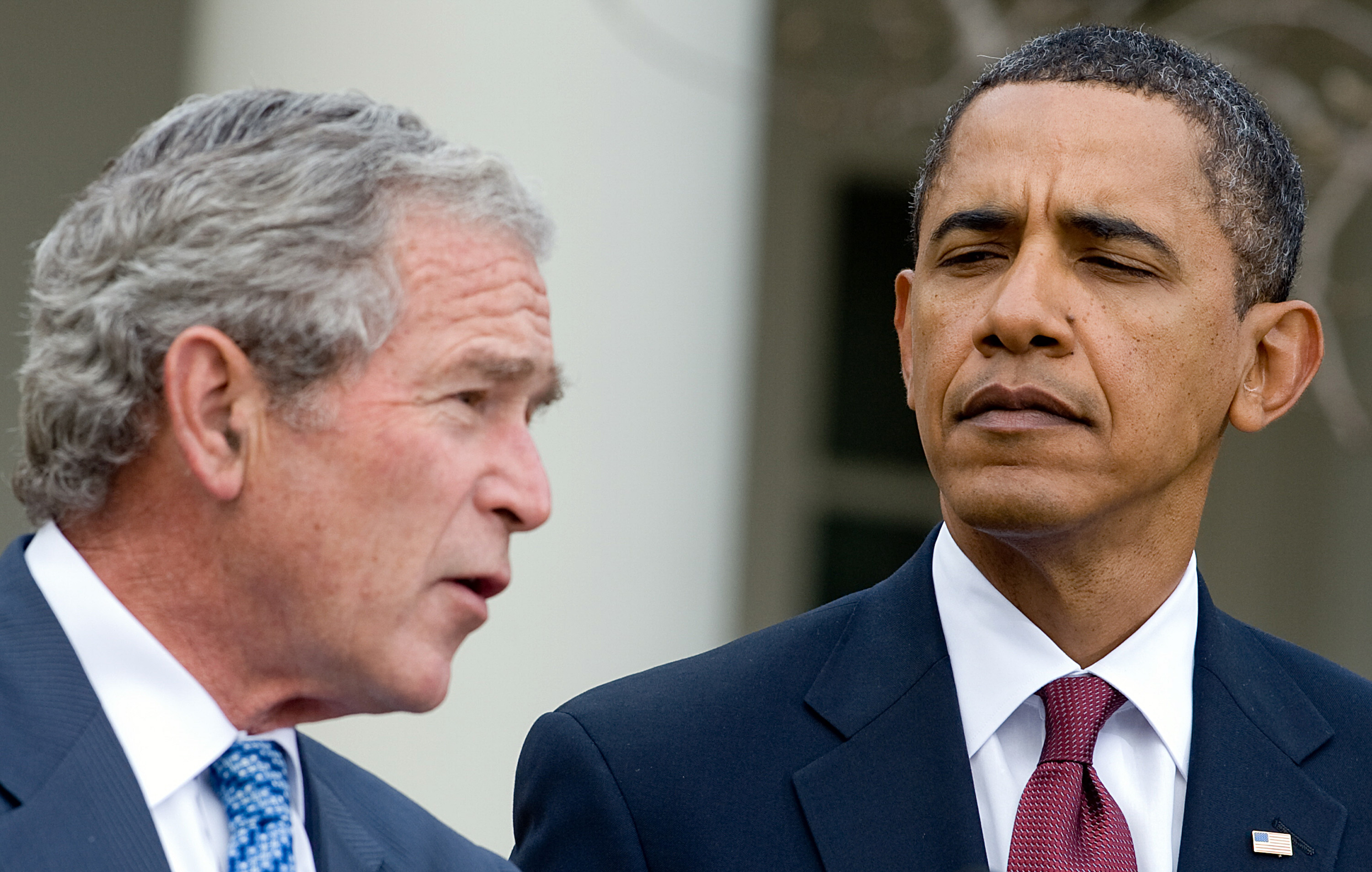 President Obama is no stranger to criticism of his foreign policy, but for some of his most ardent detractors, Iraq's descent into violence is being labeled the final straw. Worse yet for the president who was elected partially because of his promise to end the wars in Iraq and Afghanistan, former President George W. Bush's team is stepping forward with a big, fat "I told you so."

That was the message of an op-ed in the Wall Street Journal Wednesday morning in which former Vice President Dick Cheney defined the Obama doctrine as "empty threats, meaningless red lines, leading from behind, appeasing our enemies, abandoning our allies or apologizing for our great nation." Cheney, one of the chief architects of the Iraq war, threw out a few other choice terms to describe the president, among them, "wrong," "willfully blind," and "a fool."

In other words, Cheney argued, time has shown the Bush doctrine beats the Obama doctrine.

Those very decisions that Cheney chastised in the op-ed were motivated by Mr. Obama's sharp turn away from Bush-era foreign policy, something the president made a centerpiece of his initial presidential campaign in 2008.

In the words of American University foreign policy professor Benjamin Jensen, the Bush doctrine boiled down to, "We will fight terrorists, and we will promote democracy. Period."

"You knew exactly where the last administration stood in terms of its response to threats to American interest whether they were from a state or a non-state actor," he told CBS News.

An Obama doctrine has been more difficult to define, though subject to the same levels of criticism that Bush faced.

An aggressive approach to the use of American military power abroad might have yielded different results in some of the conflicts the president has faced during his time in office, ranging from the civil war in Syria to Russian incursion in Ukraine. An unwillingness to do so - along with ambivalence from many lawmakers and the American public - has left Mr. Obama vulnerable to charges of leading from behind.

"It's definitely a reaction to Bush's foreign policy. Bush was very proactive and aggressive along with Vice President Cheney in triggering conflict, willing obviously to go to war with a country to proactively prevent something from happening, and Obama is against that," Princeton University history professor Julian Zelizer told CBS News.

But whether the president has swung the pendulum of foreign policy too far from Bush is a harder question to answer. Zelizer notes that Obama has been hampered by members of Congress who are more hesitant to use military power than they once were, as well as a war-weary public.

"He can't do what Bush does even if he wanted to because there's just not a lot of interest," Zelizer said. "It's not so much about President Obama; it's more about an American public that just isn't very willing right now to do anything bigger."

Cheney - who argued in the op-ed and in a video with his daughter, Liz, that a complete reversal of Obama's foreign policy is the only way to restore American influence - would likely have a hard time marshaling American support today.

The U.S. invasion of Iraq in the spring of 2003 had the backing of 69 percent of the U.S. public and remained high through the first year of the war, CBS News polls found. By April 2004, the Abu Ghraib prison scandal and mounting U.S. casualties had pushed support below 50 percent. And by early 2006, a full 54 percent of Americans said the U.S. should have stayed out of Iraq entirely.

Ten years after the invasion, another CBS News poll found that number was unchanged: 54 percent of Americans still believe the U.S. shouldn't have gone into Iraq. Thirty-eight percent said taking military action was the right thing to do. Even among Republicans, six in ten of whom supported the war effort, just 46 percent say the U.S. succeeded there.

One of the rare times that the president backed the use of U.S. military power - a proposal to take military action against Syria in response to President Bashar Assad's use of chemical weapons against his own people - six in 10 Americans opposed such a move. Seventy-four percent opposed providing arms to anti-government forces in Syria, and 86 percent opposed sending ground troops into Syria, although that was not an option proposed by the administration. Two-thirds of respondents cited the potential for a long and costly engagement for the U.S. that could lead to a more widespread war in the Middle East or harm civilians. And two-thirds of Americans consistently believed America had no obligation to act.

Ultimately, Mr. Obama abandoned the possibility of a military strike amid low congressional interest and instead pursued a negotiated destruction of Assad's chemical weapons stockpile. Yet he still received very low marks for his handling of the situation: just one-third of the public approved.

"It's hard to win on these kinds of foreign policy areas. They're inherently frustrating: [Mr. Obama] has these contradictions between public opinion and some of the pressures that he's facing and a lot of the crises themselves don't have clear solutions including, in some ways, in Iraq," Zelizer said.

As Jensen put it, "the power of the presidency is not about nuance, it's about framing. Every president will always say this: they're always amazed at how little their power is on foreign policy. They always think it I will be much greater than it is."

And for all of Mr. Obama's attempts to project less brute force abroad, his most hailed foreign policy achievement -- the killing of former al Qaeda leader Osama bin Laden - was arguably born of an extension of Bush-era tactics like unilateral American action. Terrorism was the one area where more people approved than disapproved of the job he was doing, a March CBS News poll found, and his counterterrorism policies have been a major holdover of President Bush's foreign policy.

Juan Zarate, a former Bush counterterrorism adviser and CBS News national security analyst, said, "one of the greatest deficits of the Obama administration foreign policy is that it has spent so much time worrying about not being the Bush administration that it has failed to create nuanced or smart policies to deal with the emerging threats and problems that we now face."

"I think for any president to succeed in foreign policy they need to build on the power and policies of past administrations while improving those policies where possible. Where administrations get into trouble is where they create a caricature of prior administration policies -- of whatever side of the aisle - and fail to realize that there are certain realities in the world that require nuanced American leadership and policy," Zarate added.

One of the biggest questions raised by the Iraq crisis is whether Mr. Obama will abandon his commitment to a total withdrawal from Afghanistan by 2016. His Republican critics have said it's time to rethink that decision in light of the current violence in Iraq.

But if the White House's response to Cheney on Iraq is any indication, long-term troop commitments are still not part of the Obama equation.

"We should have a very clear focus in mind about what our national security objectives are and what we, the United States, can achieve through military force as opposed to what, in this case, the sovereign nation of Iraq and its security forces can and must achieve - unless the proposition is, as some in the past have suggested, the United States should have occupied Iraq in perpetuity," White House spokesman Jay Carney said Wednesday.

"That's simply not the president's view."