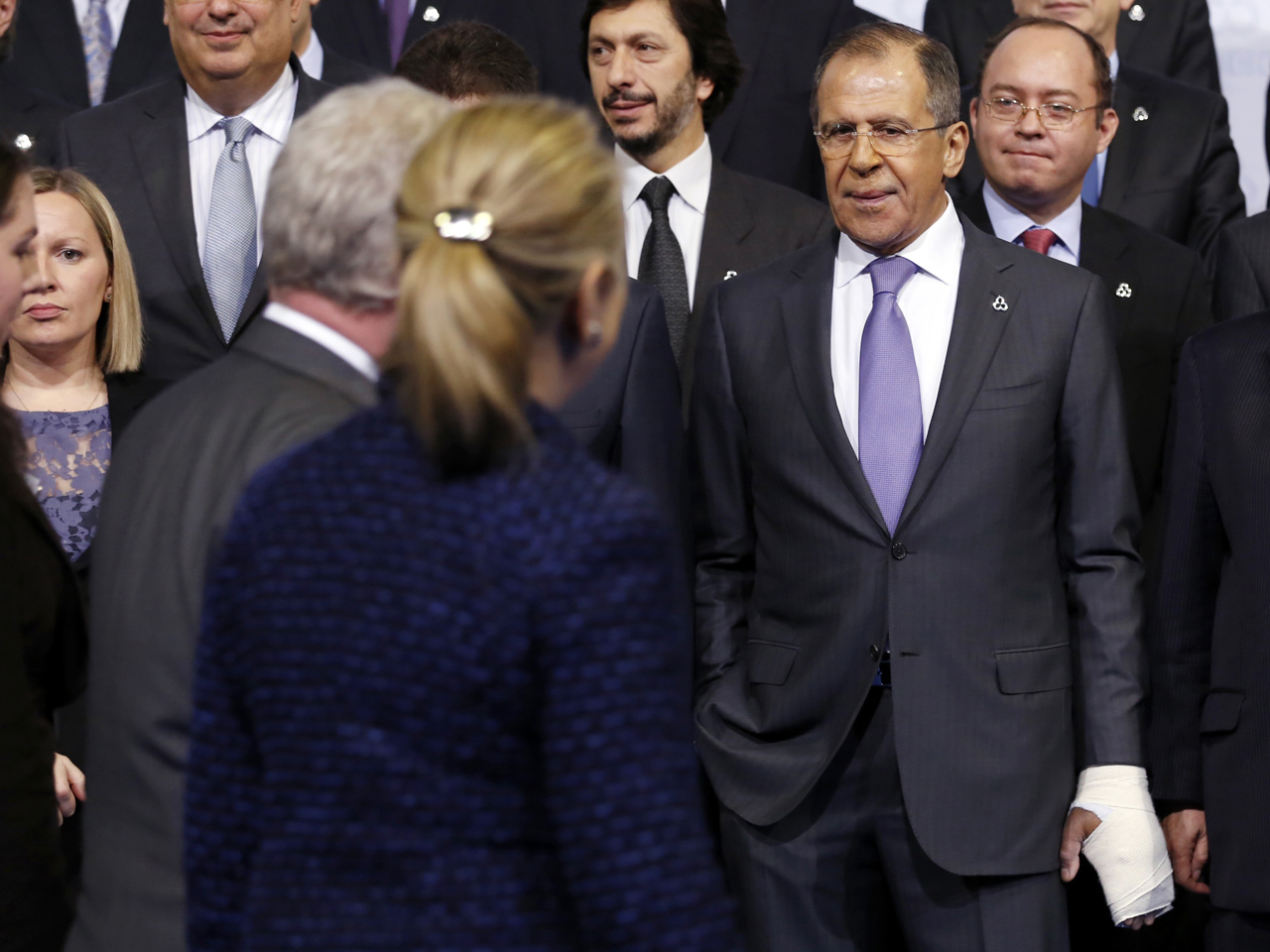 In Washington, Defense Secretary Leon Panetta said intelligence reports raise fears that an increasingly desperate Syrian President Bashar Assad is considering using his chemical weapons arsenal -- which the U.S. and Russia agree is unacceptable. It was unclear whether he might target rebels within Syria or bordering countries, but growing concern over such a scenario was clearly adding urgency to discussions an ocean away in Ireland's capital.

On the sidelines of a human rights conference, Clinton gathered with Russian Foreign Minister Sergey Lavrov and mediator Lakhdar Brahimi for about 40 minutes to look for a strategy the international community could rally around to end Syria's 21-month civil war.

"We have talked a little bit about how we can work out hopefully a process that will get Syria back from the brink," Brahimi said after the meeting ended.

The experienced Algerian diplomat, representing the global body and the Arab League, said he would put together a peace process based on a political transition strategy the U.S. and Russia agreed on in Geneva in June. Then, the process quickly became bogged down over how the international community might enforce its conditions.

"We haven't taken any sensational decisions," Brahimi said. "But I think we have agreed that the situation is bad and we have agreed that we must continue to work together to see how we can find creative ways of bringing this problem under control and hopefully starting to solve it."

Officials familiar with the talks say the Russians believe Assad may not be able to survive the war and they want to make sure they have influence in Syria if his regime falls, CBS News correspondent Margaret Brennan reports. Russia also wants to make sure it has influence if Assad loses control of the chemical weapons in his country. Brennan notes that U.S. officials are particularly concerned about those weapons falling into the hands of an al Qaeda affiliate.

While the talks are a start to a new round of diplomacy, Brennan says, it's far from a breakthrough. The Russian government is signaling it supports a political transition in Syria, but they have not officially abandoned Assad.

Secretary Clinton told Brennan in a Sept. 9 interview that the Russians were refusing to offer Assad political asylum.

"That was certainly an issue we discussed early on in this conflict," Clinton told CBS News, "and the Russians kept saying they didn't want him."

The former Cold War foes have fought bitterly over how to address the conflict, but Clinton stressed before the meeting that they shared a common goal.

"We have been trying hard to work with Russia to try to stop the bloodshed in Syria and start a political transition for a post-Assad Syrian future," Clinton told reporters in Dublin.

"Events on the ground in Syria are accelerating and we see that in many different ways," she said. "The pressure against the regime in and around Damascus seems to be increasing. We've made it very clear what our position is with respect to chemical weapons, and I think we will discuss that and many other aspects of what is needed to end the violence."

Earlier Thursday, Clinton and Lavrov met separately for about 25 minutes. They agreed to hear Brahimi out on a path forward, a senior U.S. official said. The two also discussed issues ranging from Egypt to North Korea, as well as new congressional action aimed at Russian officials accused of complicity in the death of lawyer Sergei Magnitsky.

Washington and Moscow have more often publicly chastised each other than cooperated on an international strategy for Syria. The U.S. has criticized Russia for shielding its Arab ally. The Russians have accused the U.S. of meddling by demanding Assad's downfall and ultimately seeking an armed intervention such as the one last year against the late Libyan strongman Muammar Qaddafi.

But the gathering of the three key international figures suggested possible compromise in the offing. At a minimum, it confirmed what officials described as an easing of some of the acrimony that has raged between Moscow and Washington over the future of Syria, an ethnically diverse nation whose stability is critical given its geographic position in between powder kegs Iraq, Lebanon and Israel.

Panetta said Thursday that the U.S. fears Syria is thinking of using its chemical weapons.

"The intelligence that we have raises serious concern that this is being considered," he told reporters. Other administration officials in recent days have spoken about Syrians preparing weapon components of sarin gas. The new activity, coupled with fears that rebel advances are making Assad more desperate, have led to the fear that he is deploying the weapons.

On Capitol Hill, some senators even suggested military action against Assad.

Sen. John McCain told reporters the U.S. should "be ready to do whatever is necessary to prevent" the use of chemical weapons, "including the option of military intervention."

Syria's Deputy Foreign Minister Faisal Mekdad on Thursday accused the United States and Europe of using the issue of chemical weapons to justify a future military intervention against Syria. He warned that any such intervention would be "catastrophic."

Brahimi is hoping to resuscitate something akin to the plan crafted earlier this year by his predecessor as Syria peace envoy, former U.N. Secretary-General Kofi Annan. Annan's plan never got off the ground, and he resigned his post in frustration.

Annan's plan demanded several steps by the Assad regime to de-escalate tensions and end the violence that activists say has killed more than 40,000 people since March 2011. It then required Syria's opposition and the regime to put forward candidates for a transitional government, with each side having the right to veto nominees proposed by the other.

If anything resembling that plan progresses, it would surely mean the end of more than four decades of an Assad family member at Syria's helm. The opposition has demanded Assad's departure and has rejected any talk of him staying in power. Yet it also would grant regime representatives the opportunity to block Sunni extremists and others in the opposition that they reject.

The United States blamed the collapse on Russia for vetoing a third resolution at the U.N. Security Council that would have applied world sanctions against Assad's government for failing to live by the deal's provisions.

Russia insisted that the Americans unfairly sought Assad's departure as a precondition and worried about opening the door to military action, even as Washington offered to include language in any U.N. resolution that would have expressly forbidden outside armed intervention.

The same pitfalls threaten Brahimi's process. The Obama administration is likely to insist anew that it be internationally enforceable - a step Moscow may still be reluctant to commit to.

But with the war turning against Assad, U.S. officials are hoping that Russia will be prepared to drop its support for him.

In Syria, government forces on Thursday shelled rebellious suburbs around Damascus and clashed with rebels in the capital itself and in Aleppo, Syria's largest city.

Robert Ford, the U.S. ambassador in Damascus until his recall earlier this year, pointed to the closure of Syria's main airport and the rebel capture of defense sites inside the Damascus beltway as key indicators of the conflict's direction. "The writing is on the wall," he said at the Foundation for Defense of Democracies forum in Washington.

Also Thursday, NATO advanced its plan to place Patriot missiles and troops along Syria's border with Turkey to protect against potential attacks. Assad's regime blasted the move as "psychological warfare," saying the new deployment would not deter it from seeking victory over rebels it views as terrorists.