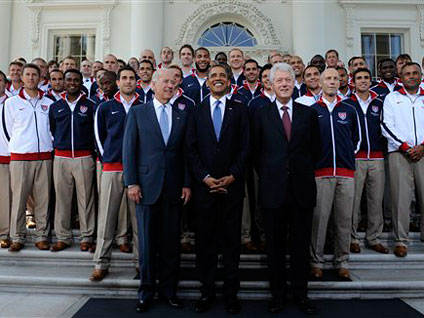 The Obama White House is offering no apologies for the light-hearted events on the president's schedule even as he faces "the worst environmental disaster of its kind" in U.S. history.

It was an easy target for mocking last Thursday - and some pundits couldn't resist taking swipes -- when on Day 38 of the oil spill crisis - President Obama hosted a Rose Garden reception for the Duke Blue Devils and a North Portico photo op with the U.S. World Cup Soccer teams.

Later on that same day, he presided at an East Room social event marking Jewish American Heritage Month. And that evening, he flew his family to Chicago for a getaway back home over the Memorial Day weekend.

The White House says not to judge Mr. Obama's level of engagement to the oil spill calamity by a few unrelated events on his schedule.

"The president is the president 24-hours a day," said spokesman Robert Gibbs at his briefing yesterday. And he was quick to dismiss criticism from pundits who don't think Mr. Obama is displaying enough public distress about the oil spill.

Even some supporters have ripped Mr. Obama for being slow to visit the scene of the oil spill and not returning often enough. He's making his 3rd visit to the Louisiana Gulf Coast today, which is Day 46 of the disaster.

There's no reason to believe that the gusher in the Gulf of Mexico would be plugged one second sooner if the president did not do those sports team events last Thursday. And at his news conference that same day, Mr. Obama tried to drive that point home.

"Those who think that we were either slow on our response or lacked urgency don't know the facts," he told reporters. "This has been our highest priority since this crisis occurred."

But a president's public schedule can be viewed as a reflection of what's important.

As President Franklin Roosevelt led American through World War II, his schedule was pared of what were deemed inappropriate events.

Six months into the war, FDR hosted a garden party for the White House Army Guard, but he kept his participation brief.

"I wish I could come down and have a sandwich and a soft drink with you, but I have got to get back to work," he told the soldiers.

Roosevelt also hosted a number of State Dinners during the war and during the final weeks of the 1944 presidential campaign made a number of political appearances.

"I would hate to be reelected by a little bit of a vote. That wouldn't spell democracy. If I am reelected, I want it to be a big vote," he told a rally in Fort Wayne, Indiana.

Floridians Brace for "Inevitable" Arrival of Oil
Washington Unplugged: Does Obama Have a Problem with Lack of Emotion?
Political Fallout from Oil Spill Still Hounds Obama

In the days after the 9/11 attacks, President Bush cleared his schedule of most, but not all, light-hearted fare.

He went out to local restaurants a couple of times for dinner & still spent a few weekends at Camp David and at his Texas ranch.

In addition, within a few months of the start of the war in Iraq, President Bush traveled to China, Europe and the Middle East and returned to political fundraising.

The Obama White House today announced that Mr. Obama was again scrubbing his scheduled visit to Australia and Indonesia the week after next. It was decided he could not be seen on a non-essential foreign trip while the gusher in the Gulf remains unplugged.

The point made by every White House is that occasional unimportant events on his schedule do not shortchange his commitment to the priorities. And spokesman Robert Gibbs made that case yesterday.

"I think what the American people and the citizens of the Gulf are expecting are results, and I think that's what the president will be measured by," said Gibbs.

As for whether the president is exhibiting sufficient public distress at the oil spill?

And as if to prove the point, Mr. Obama today welcomes Major League Soccer's Champion Real Salt Lake to a White House reception in its honor.

History shows there's a political danger to be faced when a single issue is the be-all and end-all focus of a presidency. Remember Jimmy Carter's handling of the Iran hostage crisis.