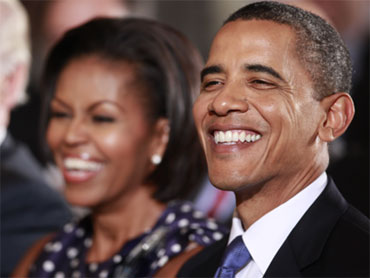 Did you hear the one about the African-American president and Jewish-American baseball legend who were in the East Room of the White House for a reception?

The president tells the audience that he and Sandy Koufax have something in common.

Oy. Where's Jackie Mason when you need him?

It was a bit of Jewish humor from President Barack Obama in welcoming remarks at what he said was the first-ever White House reception observing Jewish American Heritage Month.

"This is a pretty fancy ... pretty distinguished group," he said of the invited guests, which included members of the House and Senate, two justices of the Supreme Court, Olympic athletes, entrepreneurs, Rabbinical scholars, "and Sandy Koufax." The mention of his name brought the biggest cheer at the event.

The president spoke of "the diversity of talents and accomplishments" that reflect the Jewish-American heritage dating back to pre-Revolutionary times.

"Even before we were a nation, we were a sanctuary for Jews seeking to live without the specter of violence or exile," said Mr. Obama citing "a band of 23 Jewish refugees to a place called New Amsterdam more than 350 years ago."

And in the 21st century, the president hailed the U.S. relationship with the Jewish State.

"Our bond with Israel is unbreakable," he told the reception, five days before he is to have a fence-mending round of talks with Israeli Prime Minister Benyamin Netanyahu.

Mr. Obama likened the U.S. pursuit of a peace agreement between Israel and the Palestinians to the Hebrew principle of Tikkun Olam, the obligation to repair the world.

There were no other stabs at or tributes to Jewish humor by Mr. Obama. Although his Congressional guest list at the event did include former Saturday Night Live comic - and now Senator, Al Franken.