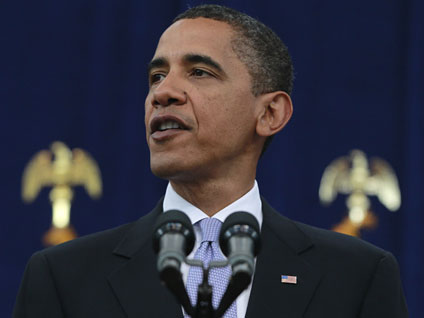 President Obama was in Pittsburgh today to talk about the economy, but the disaster in the Gulf was never far from his mind. Weaving the oil spill and energy issues into his speech, he made two basic arguments related to the spill.

First, right from the top of the speech he continued his campaign to convince a skeptical public that he's fully engaged:

"Right now, stopping this oil spill and containing its damage must be the top priority of my Administration, and we are waging this battle every minute of every day," he said.

It's going to take a lot more than brief speech references to knock down the notion that he was slow out of the blocks - which already may have solidified into conventional wisdom. But ever since his mea culpa-filled press conference last week it's been clear that he gets it - that it's going to take a concerted effort if there's any hope of undoing the political damage.

Later in the speech, after excoriating Republicans for their "economic policies of the past" the president returned to the spill: "We have to acknowledge that there are inherent risks to drilling four miles beneath the surface of the Earth - risks that are bound to increase the harder oil extraction becomes. Just like we have to acknowledge that an America run solely on fossil fuels should not be the vision we have for our children and grandchildren ... The time has come, once and for all, for this nation to fully embrace a clean energy future."

He then argued for passing the energy bill that's now before Congress, which would take dramatic steps forward on clean energy, and for rolling back billions of dollars in tax breaks for the oil companies to pay for it all.

In other words, the president is using the disaster in the Gulf to argue that it's more urgent than ever to get moving on his energy agenda.

As Rahm Emanuel likes to say: never waste a crisis.