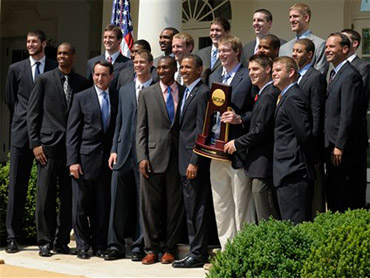 President Obama honored the Duke Men's Basketball team this morning at the White House for winning the 2010 NCAA Basketball Tournament, congratulating the team for its achievements during the season - among them the 61-59 victory over Butler to secure the team's fourth NCAA title.

"It was, as everybody here knows, an incredible tournament from start to finish - one of the most exciting tournaments any of us have ever seen," he said. "The championship game against Butler - the most-watched championship game in more than 10 years - was everything fans hoped it would be."

The president also acknowledged his mistakes in filling out his bracket for last year's tournament. One year removed from correctly selecting North Carolina to win the 2009 NCAA tournament, Mr. Obama, a basketball enthusiast, incorrectly chose Kansas, not Duke, to win - an error he said he has received a lot of flak for, especially from Duke head coach Mike Krzyzewski.

"I know that all of you remember last year, when I filled out my bracket I picked North Carolina to win it all," the president said. "It wasn't anything personal - just trying to win some money. I was right."

He added, "This year, [Krzyzewski] went out with all these guys and he won, so he could come to the White House and crow about it. Payback is sweet, isn't it, Coach?"

The president also poked fun at his personal aide, Reggie Love, who played basketball for Duke and won a championship in 2001.

"Coach and I were both discussing," said Mr. Obama. "I play with Reggie now, and when Reggie was playing, Coach said, don't shoot. And when he's on my team, I say to Reggie, don't shoot. So things haven't changed that much."

All joking aside, the president ended by commending the Blue Devils for their dedication and hard work off the court. He lauded the team's work with the Emily K. Center, a program set up by Krzyzewski to help underprivileged children, and the "Read with the Blue Devils" program where players read to patients at the Children's Hospital in Durham.

After the speech, the team presented Mr. Obama with a signed jersey -- and as a final, playful jab, a framed official bracket reminding him who had ultimately won the tournament.