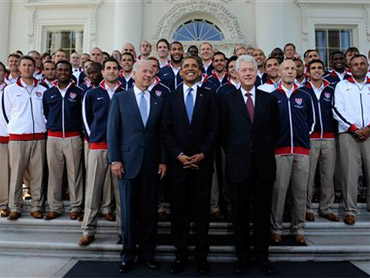 President Obama met with the U.S. men's World Cup soccer team to send them off to South Africa in style.

"Everybody's going to be rooting for you" he said.

Mr. Obama mentioned that while soccer is not as hugely popular in the US as it is around the world, the World Cup is one of the world's biggest stages. He said he would be following the games on ESPN to make sure they were doing well.

"Wish you all the best," Mr. Obama told the team.

Former President Clinton was there as well and he commented on the team's matching leather dress shoes (at left).

"I want to join the team to get the shoes" said Mr. Clinton. After Mr. Obama spoke, Mr. Clinton made a point of showing him the shoes.

"Those are nice looking shoes" said the current president. "This is best dressed soccer team I've ever seen," he added.

Vice President Biden will be attending the World Cup games in place of Mr. Obama.

Biden joked it was "a tough assignment" but that he's happy to go.