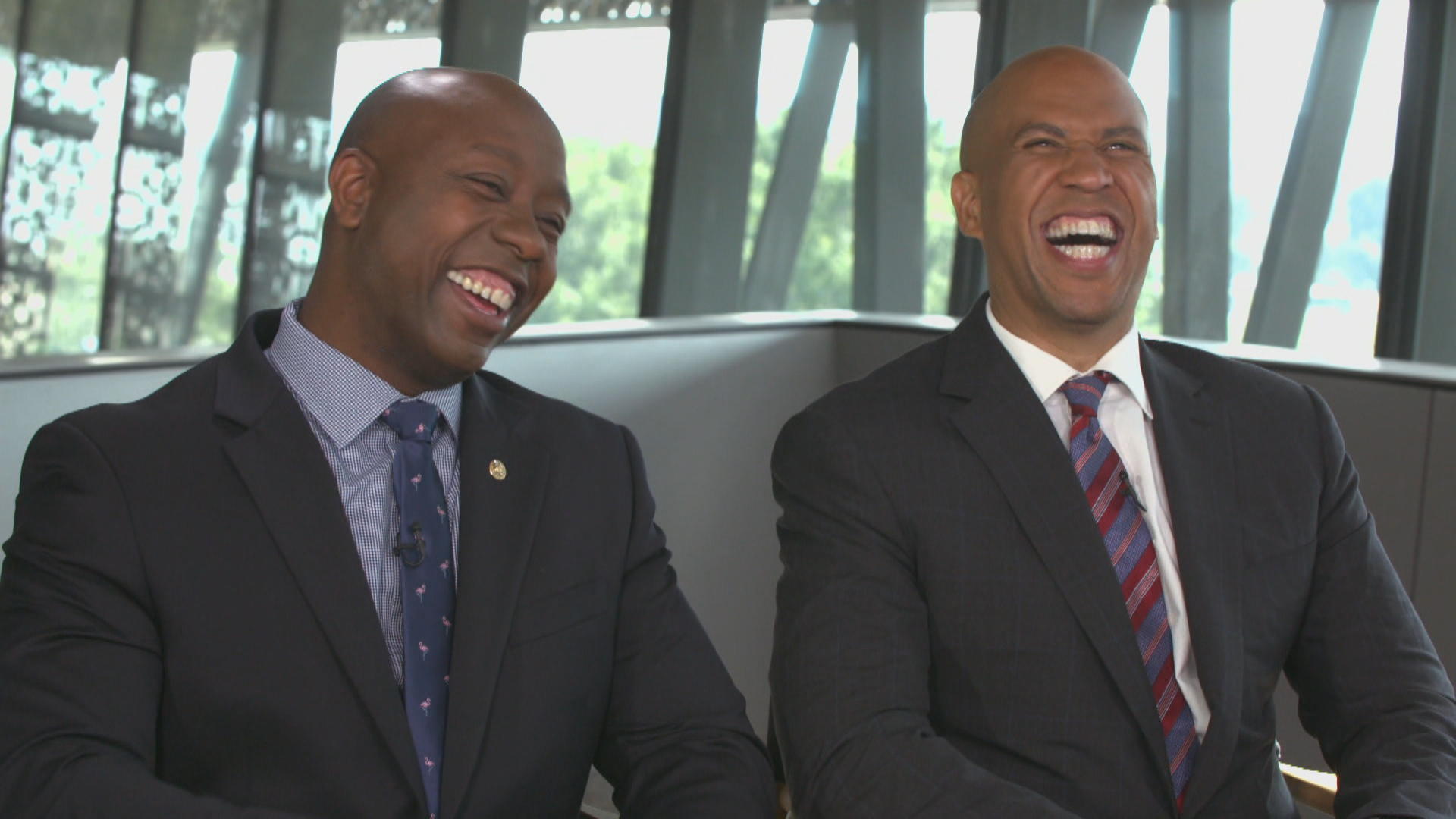 Democratic Senator Cory Booker of New Jersey and Republican Senator Tim Scott of South Carolina do not have a lot in common, except that they are the only African-Americans currently serving in the United States Senate.

The two came together Thursday to visit the Smithsonian’s National Museum of African American History and Culture for the very first time. The senators spoke to “CBS This Morning” co-host Charlie Rose about growing up as African-Americans, as well as their hopes for the future of America.

“I’ll tell you, when I walked in here, I first thought about my grandfather who passed away in January of this year,” Scott said. “I thought about taking him to vote for the first African American president -- a day that he never thought would come. Walking in here, understanding the weight of history, the gravity of the circumstances that we face as a nation, encouraged me, saddened me, and made me understand the important role that we can play in making this country better together.”

The two senators came from very different backgrounds. Senator Scott grew up in a poor single parent household and did not do very well in school, he said.

“So my story is, really is that, kid that almost flunked out of high school. You got a Rhodes Scholar over here,” Scott said, referring to Booker. “We have a contrast in our experience growing up and where we are today.”

“And what unites you?” Rose asked.

“Well, I think a lot. People would expect somebody who’s-- I joke with them far out there on the right and myself on the left,” Booker said, laughing. “But there is a kinship and bond I felt with Tim almost instantly -- a friendship, a commonality of experiences.”

Despite their different backgrounds, Booker said he and Scott share a common heritage, experience and families because of their “African-American experience.”

That sense of service led both senators to step across the aisle and fight to reform the criminal justice system together.

“We have a country right now where there’s no difference between blacks and whites for using drugs or even dealing drugs. But African-Americans are almost four times more likely to be arrested for doing things that the last two presidents admitted to doing. And it’s been such a massive reality that our prison population and jails are filled with the poor, minorities, mentally ill, drug addicted. We now are the land of the free, we’re the incarceration nation, leader in the globe, planet Earth. And it’s infecting every area of American life,” Booker said. “And so what I rejoice in is that I’m co-sponsoring legislation with Tim -- both sides of the aisle -- beginning to see a common urgency from a fiscal prudency perspective, all the way to the righteousness of this crusade. If we are going to be the land of liberty, that we need to do it-- this a different way.”

In a moving speech on the Senate floor about the contemporary issues of conflict between community and law enforcement, Scott talked about how many times he’s been stopped by police as an elected official.

“I have however felt the pressure applied by the scales of justice when they are slanted,” he said.

Both senators hope this historic museum will serve as validation as well as proof of how far we have come and an inspiration for how far we need to go.

“It does seem to be necessary for us to remind ourselves of where we’ve been,” Scott said. “I hope that one of the beauties of this museum being here, will be an understanding and appreciation of the depth of the pain, agony, and tragedy of slavery. I hope that the weight of the past will slow your gait and bow your head. And as you walk out here, I hope that the sense of freedom and a sense of expectations will overwhelm you. And that you will feel individually responsible for making America the most amazing country for every single citizen in our land.”

The National Museum of African American History and Culture will open to the public on Saturday, Sept. 24.