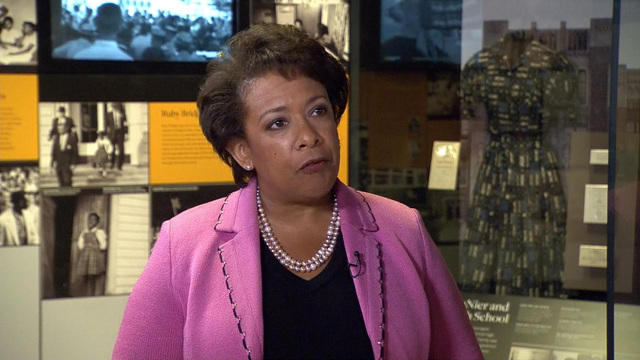 In February 1960, black college students staged a sit-in at F. W. Woolworth and another chain store to desegregate their lunch counters.

Nine months earlier, U.S. Attorney General Loretta Lynch was born to Lorenzo Lynch, a minister at Providence Baptist Church and his wife, Lorine, an English teacher and school librarian. Her father’s church was one of two black churches that let student protesters use the basement to hold meetings and organize.

Growing up hearing about the sit-in and her parents’ role in the civil rights struggle instilled in Lynch a sense “that anyone can play a part in advancing inequality.”

“When I see this, I have a great sense of pride in those students and when I think about the fact that it illustrates that ordinary people can make a tremendous difference when they see inequality,” Lynch told “CBS This Morning” co-host Norah O’Donnell, speaking in front of one of the lunch counter stools used by the four students who initiated the sit-in and came to be called the “Greensboro Four.” The stool is now exhibited at the Smithsonian’s National Museum of African American History and Culture​.

“It was important for him to support that movement,” Lynch said about her father.

Her mother also participated in her own “private protest,” Lynch said, by refusing to drink from the segregated water foundations.

“That was her stand, that was her view,” Lynch said. “She was just through. … She said this was not the America she believed in.”

The Greensboro Four -- four college freshmen at North Carolina Agricultural and Technical College -- were subsequently joined by hundreds of demonstrators, including white female students. This grew into a six-month boycott that ultimately brought sales down by a third and forced the store owners to desegregate the counter. Lynch said their example shows the “integral” role of African Americans.

Lynch also said this “highlights the important role that young people can play” even today, especially as many still do not feel a part of the “American dream or American progress.” For example, voter ID​ laws in some states have been found to disproportionately hurt minorities. Lynch said some of the cases filed on the issue revealed there were discussions of “how to suppress the vote,” and that the country is still dealing with “the vestiges of inequality and people who have trouble accepting everyone’s full participation in society.”

“But when we’re all involved, we’re stronger,” Lynch said.