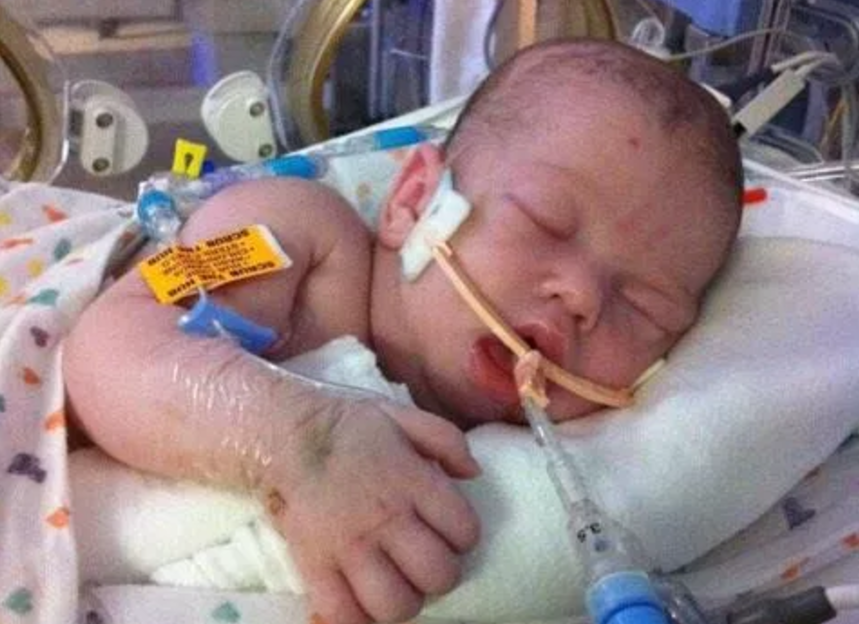 Five years after losing her newborn son, Landon, Jillian Johnson is speaking out about a serious problem she wants breast-feeding moms to be aware of.

She says she’s sharing her story in hopes that “no other family ever experiences the loss that we have.”

After giving birth to a healthy 7-pound, 7-ounce baby boy via cesarean section, Johnson and her husband, Jarrod, were thrilled. They had read all the baby books, attended plenty of parenting classes and didn’t hesitate to ask their physicians any questions. They thought they were ready.

But Johnson wasn’t ready for what happened next.

Landon was always hungry, and whenever she removed him from her breast, he began to cry.

“Landon cried. And cried. All the time. He cried unless he was on the breast and I began to nurse him continuously,” Johnson explained in a blog post on the Fed Is Best Foundation, a non-profit organization of parents and health professionals focused on infant feeding. “When I asked [the nurses] why he was always on my breast, I was told it was because he was ‘cluster feeding.’”

Cluster feeding occurs when babies bunch their nursings close together at certain times of the day.

Since Johnson was diagnosed with polycystic ovary syndrome, a condition in which a woman’s levels of the sex hormones estrogen and progesterone are out of balance, a lactation consultant suggested she might have a problem producing milk.

The consultant recommended some herbs to take, but other than that Johnson was free to leave the hospital — with her crying, fussy baby in her arms.

“We took him home … not knowing that after less than 12 hours home with us, he would have gone into cardiac arrest caused by dehydration,” Johnson said.

At the time, Johnson was receiving care from a “baby-friendly” hospital, which encourages practices that promote and support breast-feeding.

“Unless you’d had a breast augmentation or cancer or some serious medical reason as to why you couldn’t breast-feed, your baby would not be given formula unless a prescription was written by the pediatrician,” Johnson wrote in her blog post.

Medical research has shown breast-feeding offers many health benefits for babies, helping boost their immune systems, protect against allergies, and reduce the risk of sudden infant death syndrome (SIDS). The American Academy of Pediatrics generally recommends breast-feeding exclusively for baby’s first six months, and continuing for a year or longer as other foods are introduced.

But some new mothers experience problems trying to breast-feed, and may not know where to find answers.

Jody Segrave-Daly, a newborn nursery and Neonatal Intensive Care Unit (NICU) nurse and co-founder of Fed Is Best, told CBS News there’s not a clear protocol that explains when babies should receive supplementation — replacing a breast-feeding with a bottle of expressed human milk or baby formula.

“Nobody is educating mothers how to prevent this,” Dr. Christie del Castillo-Hegyi, a newborn brain injury and breast-feeding complications researcher and co-founder of Fed Is Best, told CBS News. “We have a national health crisis. ‘Baby-friendly’ protocol is unsafe and barbaric.”

Johnson wasn’t producing enough milk to nourish Landon, and within two days, he lost nearly 10 percent of his birth weight. His parents called 911 after they found him pulseless and blue after a feeding. He was diagnosed with hypernatremic dehydration and cardiac arrest from hypovolemic shock, a condition in which rapid fluid loss results in multiple organ failure. He was put on life support. Landon was 15 days old when he died.

“They call it the ‘second night syndrome’ of starvation,” del Castillo-Hegyi said. “They’re continuously nursing, but they’re not having enough milk during breast-feedings.”

Having experienced problems with cluster feeding with her own firstborn, del Castillo-Hegyi said she has spent years educating women on the topic and sharing warning signs.

Newborns should be nursing every 2 to 3 hours, del Castillo-Hegyi said. After they’re done, they shouldn’t be looking for more milk. Weight loss, jaundice and weakened vital signs should also be considered warning signs that a child isn’t receiving enough food from breast-feeding alone.

A newborn’s fasting state leads to complications like dehydration, hypoglycemia and severe jaundice, and there can be irreversible brain damage, del Castillo-Hegyi explained.

“The best advice I was given by one of his NICU doctors while he was on life support is sure breast is best, but follow with the bottle,” Johnson wrote. “If I had given him just one bottle, he would still be alive.”