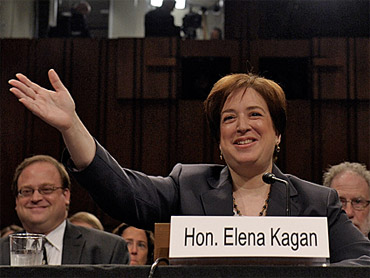 Challenged bluntly by Republicans, Supreme Court nominee Elena Kagan said Tuesday the Pentagon's recruiters had access to Harvard Law School students "every single day I was dean" and rejected claims she maneuvered to thwart them.

"I'm just a little taken aback by the tone of your remarks because it is unconnected to reality," retorted Sen. Jeff Sessions of Alabama, the first Republican on the Senate Judiciary Committee to question President Barack Obama's choice for the high court in public.

Said Kagan: "I respect and indeed I revere the military."

The exchange came near the beginning of a full day of questioning by members of the panel, which will vote first on Kagan's appointment to succeed retiring Justice John Paul Stevens. Barring a major gaffe, the 50-year old Obama administration solicitor general appears well on her way toward confirmation in time to take her seat before the court opens a new term in October.

She said recent rulings upholding gun rights are a "binding precedent" for future cases, and said Supreme Court holdings require that in any attempt to restrict access to abortion, "the woman's life and the woman's health must be protected."

But she was less forthcoming when asked whether she believed the Supreme Court had erred last winter in ruling that corporations and unions were free to spend their own funds on political activity.

Kagan said that as solicitor general, she had argued the government's side of the case, which turned out to be a loser in a 5-4 ruling. Pressed to say what her personal views were, she said, "I did believe we had a strong case to make. I tried to make it to the best of my ability," she said.

Obama criticized the ruling in his most recent State of the Union address, Democrats on the committee also have attacked it sharply and the House recently passed legislation to restrict its impact.

Without referring to the proposed legislation, Kagan told Sen. Orrin Hatch R-Utah, the issue was now settled law as a result of the ruling.

Democratic Sen. Patrick Leahy of Vermont, the committee's chairman, was first to broach the military recruiting controversy, raising the issue that Republicans had often cited in pre-hearing criticism of Kagan.

"I've only cried once during this process," Kagan said, recalling her reaction to an op-ed article praising her for her treatment of the military, a commentary written by a Marine captain and 2008 graduate of Harvard Law.

The hearings turned testy when Sessions returned to the issue of the military's presence at Harvard Law School, and a controversy that arose when she blocked recruiters from the career services office.

She has said she acted because the military's "don't ask, don't tell" policy, which bars openly gay men and women from serving, was a violation of the university's anti-discrimination rules.

As an alternative, she encouraged a campus veterans group to facilitate the Pentagon's recruitment of students, describing that as an attempt to comply with a law that require schools receiving federal funds to give equal access to military recruiters. At the time, the law's validity was under challenge in federal court.

Sessions disputed Kagan's version of events, saying that for one recruiting season "you gave them (the Pentagon) the runaround. ... You've continued to persist with this view that somehow there was a loophole in the statute that Harvard didn't have to comply with."

Kagan gave no ground, countering that "military recruiting went up that year, not down," when Pentagon's representatives worked through the veterans office on campus.

Kagan also sparred at length with Sen. Jon Kyl, R-Ariz., who had said on Monday the late Justice Thurgood Marshall was a judicial activist. When Kyl's turn came to question Kagan, he said she had written glowingly of the man for whom she once clerked, and he asked whether she would tend to judge cases in a way that would protect the rights of the disadvantaged.

"If you confirm me, you'll get Justice Kagan, you won't get Justice Marshall," she said. She added that the "glory of the courts" is accessibility to all, and after that, the Constitution rules.

Responding to Sessions on another issue, Kagan refused to describe her political views as "progressive in the mold" of the president who twice has appointed her to important jobs.

She also sidestepped when the Alabama Republican, citing a characterization by a senior White House official, sought to label her as a "legal progressive."

"I honestly don't know what that label means," she said. "I've served in two Democratic administrations. ... You can tell something about me and my political views from that."

Kagan also declined when Sen. Herb Kohl, D-Wis., asked for her views of the other members of the court she hopes to join. She said it would be a "bad idea" for her to talk about current justices, drawing laughter from a crowded hearing room.

There were fleeting moments of levity in all the talk of precedent, case law and controversy.

"I want to just have a little heart-to-heart talk with you, if I might," Sen. Dianne Feinstein, D-Calif., said when time came for her to question Kagan.

"Just you and me?" Kagan said as laughter rippled across the room.

"Just you and me and nobody else," said the senator.

Leahy interjected: "Don't anybody in the room listen."