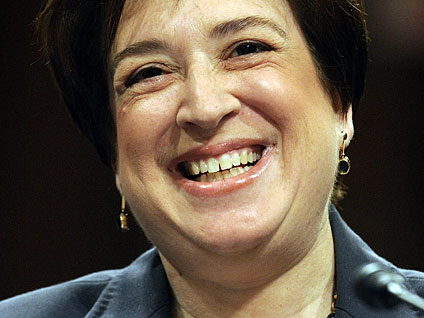 To someone in the legal profession, nomination to the Supreme Court may be one of the most prestigious developments in his or her career, and politicians wrangle over Supreme Court nominees' views and ideological leanings each time someone new is nominated.

But by and large, polls show the public knows very little about these nominees.

In a CBS News Poll conducted in late May, about two weeks after Elena Kagan was nominated to the Supreme Court, three in four Americans said they had no opinion of Kagan. Just 16 percent had a favorable opinion of her, and 11 percent were unfavorable.

A poll conducted by the Associated Press/GfK in mid-June found a similar lack of familiarity with Kagan: 21 percent were favorable towards her, 17 percent unfavorable - but 63 percent hadn't heard enough about her to have an opinion.

Likewise, Sonia Sotomayor -- nominated by a Democratic president -- was viewed more positively by Democrats than Republicans. The same holds true for Elena Kagan in the recent CBS News Poll: 31 percent of Democrats had a favorable opinion of her, compared to just 7 percent of Republicans.

As John Roberts' hearings wound down, a CBS News/New York Times Poll found that 63 percent couldn't say whether he should be confirmed or not.

The confirmation hearings do provide an opportunity for the public to hear the nominees' positions on issues - something Americans have long felt is important.

In 2009, by more than two to one the public said that the Senate should consider the nominee's personal views on major issues the Supreme Court may decide in addition to his or her legal background and experience. Thirty percent said legal qualifications only should be considered while 62 percent said positions on issues should also be considered.

Those figures have been similar in CBS News Polls going as far back as 1987.

Other polling data have also found a lack of familiarity with members of the Supreme Court. A recent telephone poll conducted on behalf of Findlaw.com found that just 35 percent of Americans could name even one of the justices now sitting on the Supreme Court.

Sarah Dutton is the CBS News director of surveys. For more of her posts in Hotsheet, click here.