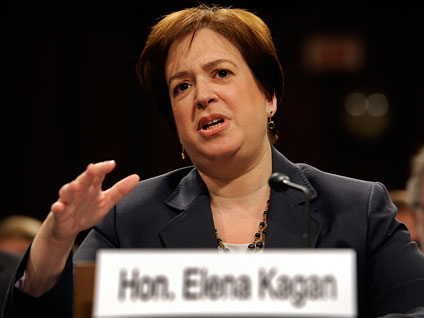 The questions have begun for Elena Kagan, on what will be a long day of sparring with Republicans, trying to paint her as a liberal activist who lacks experience. But Democrats will be ready.

They will defend her as an intellectual heavyweight who can build consensus. And the plan to make this hearing as much about the conservative Roberts Court, led by Chief Justice John Roberts, as Elena Kagan herself.

I'll be filing regular posts the next two days on the questions--and also on the Senators themselves. With the help of my researcher, Georgetown Law grad Tim Middleton, we're going to show you what some senators have said in past nominations, and how they're taking directly opposite positions now on issues like timing, document production, filibusters, etc.

Elena Kagan called the confirmation hearings a "charade" and a "farce" back in a 1995 law review article. But are the Senators helping fuel that narrative by making these hearings overtly political?

You may have seen a little bit of that on Sunday's Face the Nation, when Bob Schieffer and I pressed Sens. Patrick Leahy, the Committee's Chairman, and Jeff Sessions, the ranking Republican, for flipping their positions on the idea of a filibuster. Remember the Democrats efforts to filibuster Justice Samuel Alito after President Bush nominated him in 2005? And the Republican outcry?

Alito, like Kagan, got the American Bar Association's highest rating and was considered an intellectual superstar. He also had support from liberals, including liberal colleagues. But Leahy, along with then-Senators Barack Obama and Joe Biden, and 22 other Democrats, voted for a filibuster.

In an 2005 interview on Fox News, he said the filibuster provided an important check and balance.

"This is not a country where we say just one party has a sole voice on everything," Leahy said then. "We've always believed in checks and balances. That's what makes our democracy so great."

But that was then. Now, Leahy complains about Republicans talking of a Kagan filibuster, calling it "irresponsible."

When I asked him how he could justify that, in light of his past support of judicial filibusters, he said the Alito filibuster was "symbolic at best."

"Let's get past that," Leahy said of his vote to filibuster Alito. "When you get to the Supreme Court justice...I think the American people deserve a vote."

And I pressed Senator Sessions on his past criticism of the filibuster. He told Jim Lehrer on the PBS NewsHour in 2003 that it was "a very very grim thing."

But today, Sessions is saying a filibuster is not "inconceivable," saying a group of senators subsequently reached a compromise that allowed it in "extraordinary circumstances."

"We just have to live with the world we're in, Jan," Sessions said.