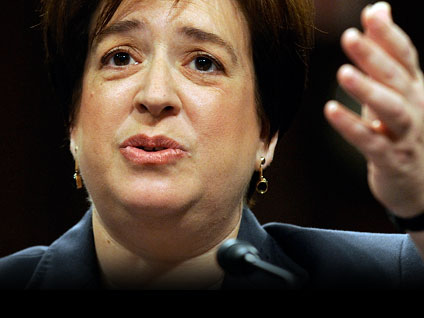 During today's Senate confirmation hearings for Supreme Court nominee Elena Kagan, Sen. Jeff Sessions, the top Republican on the committee, pressed her on whether she agrees with the characterization that she is a legal progressive, as she was called by Ron Klain, Vice President Biden's chief of staff.

"I honestly don't know what that label means," Kagan replied.

She added: "I love my good friend, Ron Klain, but I guess I think that people should be allowed to label themselves. And that's -- you know, I don't know what that label means and so I guess I'm not going to characterize it one way or the other."

Earlier in the hearing, Sessions also asked whether Kagan would agree with the characterization of Greg Craig, former chief counsel to President Obama, who said Kagan is largely a progressive in the mold of Mr. Obama himself.

"I'm not quite sure how I would characterize my politics. But one thing I do know is that my politics would be, must be, have to be completely separate from my judging," Kagan said.

"I agree with you to the extent that you're saying judging is about the case that comes before you... and then considering how the law applies to their case. Not how your own personal views, own political views might suggest anything about the case," she added.

Sessions concluded the exchange by saying he would classify Kagan as a "legal progressive."

"I would just say, having looked at your overall record, having considered those two people who know you very well... I would have to classify you as someone in the theme of the legal progressive," he said.