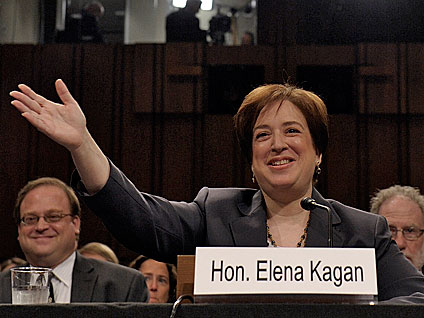 Sen. Sessions is aggressively questioning Elena Kagan on her decision, while dean at Harvard Law School, to limit military recruiting there because of the Pentagon's "Don't Ask/Don't Tell" policy.

But Kagan didn't roll over. She pushed back, saying she "revered the military" and that military recruiting did not go down on campus when she was dean. She said she opposed that policy then, and she opposes it today.

"I always tried to make sure the military had excellent access to our students," Kagan said.

At issue was a Harvard policy that prohibits employers who recruit on campus from discriminating in hiring based on, among other things, sexual orientation. Since that policy conflicted with "Don't Ask/Don't Tell," the military only got limited access to recruiting on Harvard's campus, as well as other campuses with the same policy.

In 1994, Congress passed the Solomon Amendment, which required schools that get federal funding to give military recruiters the same access as other employers.

Before Kagan became dean, Harvard amended its policy to allow military recruiters full access. But in 2004, when she was dean, a federal appeals court ruling struck down the Solomon Amendment.

So Kagan then limited the military's access, even though the appeals court decision wasn't binding on Harvard.

"In fact, you were punishing the military," Sessions said. "You were taking steps that treated them in a second class way...because you opposed that policy."

No, said Kagan. She worked hard to make sure they were able to connect with students, she said.

And a semester later, when Harvard was threatened with losing federal funding, she then granted them full access again.

Even though Kagan forcefully argued she supported the military, noting her father was a veteran, Sessions wasn't convinced.

"In fact, I'm a little taken aback by the tone of your remarks, because they're unconnected from reality," Sessions said.

Reality check: Rhetoric aside, they're both right. Kagan explained her decision and scored some points by arguing military recruiting went up. But Sessions also made some headway--especially because Kagan's position ultimately was rejected. She and other law school professors opposed the Solomon Amendment in the Supreme Court, but the justices in 2006 unanimously ruled it was constitutional, and the military should get full access.