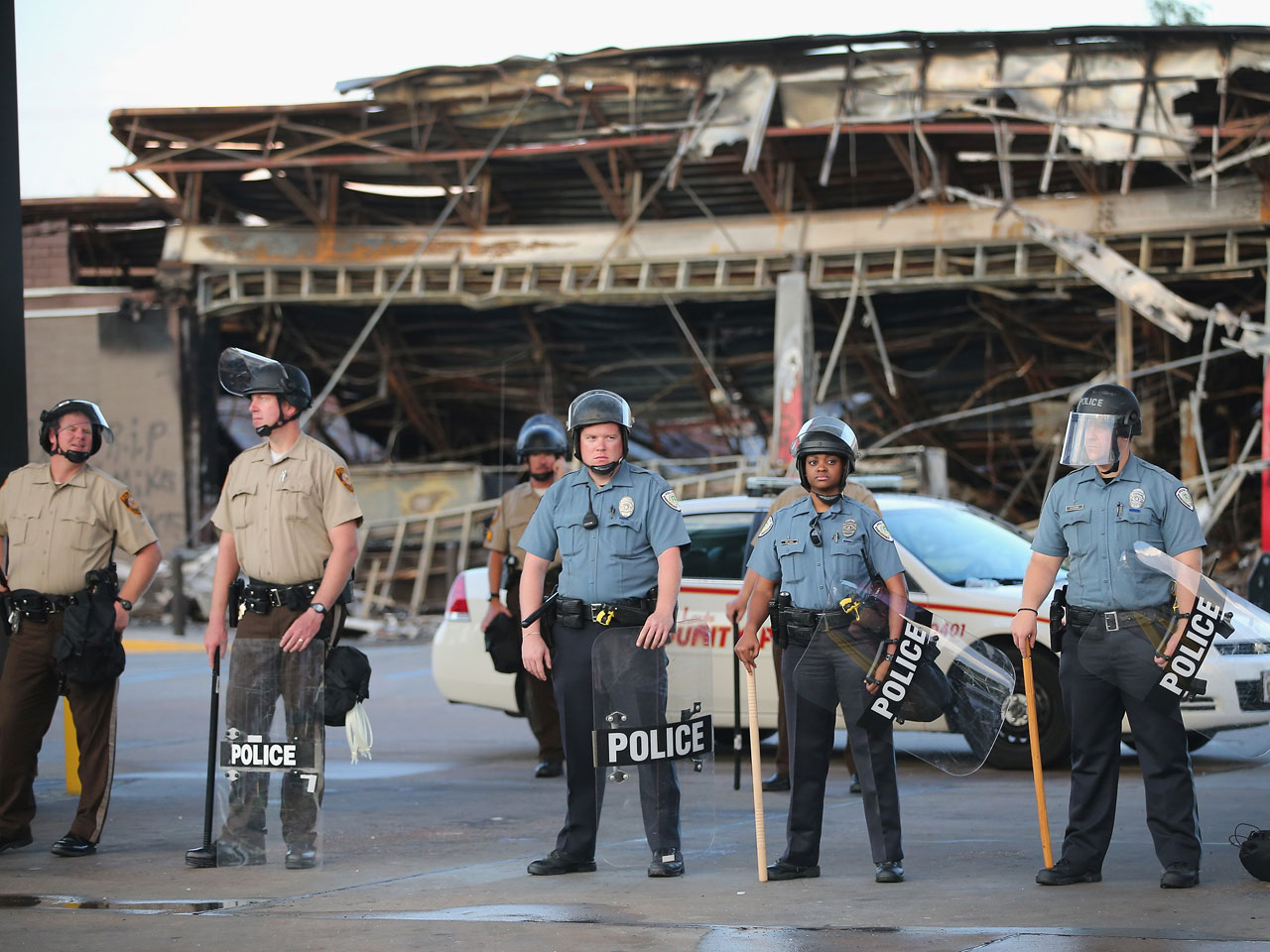 FERGUSON, Missouri - Police in riot gear fired tear gas into a crowd of protesters in a St. Louis suburb where an unarmed black teenager had been fatally shot by police over the weekend, as tension rose even amid calls for collective calm.

Between two nights of unrest, a community forum hosted by the local chapter of the NAACP civil rights group Monday night drew hundreds to a sweltering church in Ferguson, the St. Louis County suburb of 21,000 that's nearly 70 percent black and the place where 18-year-old Michael Brown was shot multiple times after being confronted by an officer.

Ferguson Police Chief Tom Jackson said a large crowd that gathered throughout the day Monday at the site of a burned-out convenience store turned rowdy at nightfall, throwing rocks at police. Officers used tear gas and shot "beanbag rounds" meant to stun them, he said.

"People are tired. They have reached the end of their rope," said Ruth Latchison Nichols after the National Association for the Advancement of Colored People forum, where many more were left waiting outside once the pews reached capacity. "Enough is enough. This is a state of emergency."

"To sneak around under the cover of darkness, to steal, to loot, to burn down your neighborhood - this does not require courage," he said. "Courage is when you strive for justice."

"Martin Luther King did not live and die so that we may steal and lie in the middle of the night," he added.

The parents of slain suburban St. Louis teen Michael Brown appeared at a news conference in tears and demanding justice in the wake of the shooting.

"We need justice for our son," said Brown's father, Louis Head, standing beside his wife Lesley McSpadden, who was barely able to stand behind a podium, slumped over with grief.

The parents were joined by their representing attorney Benjamin Crump, who represented the family of Trayvon Martin during the trial of George Zimmerman last year.

"I don't want to sugarcoat it, their baby was executed in broad daylight," Crump said of the 18-year-old who was unarmed when he was shot by a Ferguson, Mo., police officer. "That's why people are frustrated."

He said Brown's parents have called for calm as the investigation into the shooting proceeds.

"Respect how they raised him in the fact that he was a nonviolent kid," he said. He also called for any witnesses who recorded video or took pictures and do not feel comfortable giving them to local law enforcement that it could be given to the local NAACP, the family or the attorneys representing them.

"We want you in the public to know if you were a witness to what happened, don't feel intimidated come forward."

The FBI has opened an investigation into Brown's death, looking into possible civil rights violations. Witnesses have said that Brown had his hands raised when the unidentified officer approached with his weapon drawn and fired repeatedly.

Authorities have so far been vague about exactly what led the officer to open fire, except to say that the shooting - which is being investigated by the St. Louis County police at the smaller city's request - was preceded by a scuffle of some kind with a man in which the officer's weapon discharged one time inside a patrol car.

Investigators have refused to publicly disclose the race of the officer, who is now on administrative leave. But Phillip Walker said he was on the porch of an apartment complex overlooking the scene when he heard a shot and saw a white officer with Brown on the street.

Brown "was giving up in the sense of raising his arms and being subdued," Walker told The Associated Press. The officer "had his gun raised and started shooting the individual in the chest multiple times." The officer then "stood over him and shot him" after the victim fell wounded.

Dorian Johnson offered a similar account, telling reporters that he and Brown were walking home from a convenience store when a police officer told them to get out of the street and onto the sidewalk. Johnson said they kept walking, which caused the officer to confront them from his car and again after getting out of the vehicle.

Johnson said the first time the officer fired, he and Brown got scared and ran away.

"He shot again, and once my friend felt that shot, he turned around and put his hands in the air, and he started to get down," Johnson said. "But the officer still approached with his weapon drawn and fired several more shots."

"We wasn't causing harm to nobody," Johnson said. "We had no weapons on us at all."

Walker said that he did not see a scuffle or the circumstances that preceded the first gunshot.

Jackson, the Ferguson police chief, said there's no video footage of the shooting from the apartment complex or from any police dashboard cameras or body-worn cameras that the department recently bought but has not yet put to use.

Some civil rights leaders have drawn comparisons between Brown's death and that of 17-year-old Trayvon Martin, who was fatally shot by a Florida neighborhood watch volunteer who was later acquitted of murder charges.

"Instead of celebrating his future, they are having to plan his funeral," said Benjamin Crump, a family attorney who also represented Martin's relatives after he was slain in 2012 in Florida.

"I don't want to sugarcoat it," Crump added. Brown "was executed in broad daylight."