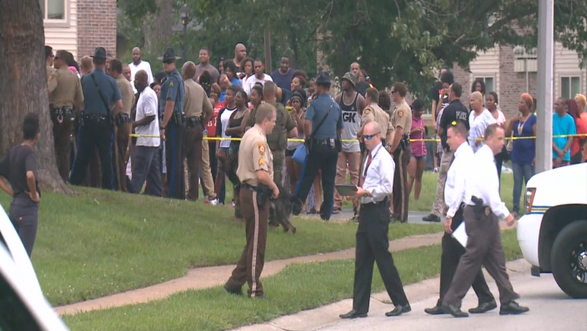 FERGUSON, Mo. - A large crowd of angry residents confronted police officers in Missouri on Saturday afternoon, yelling such things as "kill the police" after an officer fatally shot a teenager who witnesses say was unarmed.

Officer Brian Schellman, spokesman for the St. Louis County Police Department, said "a couple hundred" people came out of apartment buildings after an officer shot and killed the young man. Schellman did not identify the male or say what prompted the shooting.

But family members and witnesses identified the young man as 18-year-old Michael Brown. Multiple witnesses said Brown had no weapon on him and had his hands up in the air but was shot by authorities multiple times, CBS affiliate KMOV reported.

"He (the officer) shot again and once my friend felt that shot, he turned around and put his hands in the air," said Dorian Johnson, a friend Brown's. "He started to get down and the officer still approached with his weapon drawn and fired several more shots."

Brown's grandmother said she found his body in the middle of the street minutes after he was expected to arrive at her home.

Desuirea Harris said she was driving through her suburban St. Louis neighborhood Saturday afternoon when she saw her grandson walking a few blocks from her house. After she arrived home minutes later, she heard a commotion and ran outside to see Brown's body on the pavement nearby.

"He was a good kid. He didn't live around here," Harris told KMOV. "He came to visit me and they did that to him for no reason."

John Gaskin, a member of the St. Louis County NAACP civil rights group, called on the FBI's assistance was needed "to protect the integrity of the investigation."

"With the recent events of a young man killed by the police in New York City and with Trayvon Martin and with all the other African-American young men that have been killed by police officers ... this is a dire concern to the NAACP, especially our local organization," Gaskin said.

Gaskin was apparently referring to the recent case of Eric Garner, a black man in New York City who died after a police officer put him in a chokehold while trying to arrest him. Trayvon Martin was an unarmed black teen who was killed in 2012 by Florida neighborhood watch volunteer George Zimmerman, who was acquitted after pleading self-defense.

Gaskin said officials in the organization spoke with St. Louis County Police Chief Jon Belmar, who told them the male was a teenager and had been shot twice.

After the shooting, some people yelled threats toward the police, and officers said they thought they heard gunshots, Schellman said. There were no reports of additional injuries, he said.

After the crowd gathered, police at the scene called for about 60 other police units to respond to the area in Ferguson, a city of about 21,000 residents. According to the U.S. Census Bureau from 2012, about two-thirds of the residents are black.

Schellman said the crowd was under control by about 5 p.m. and several of the additional officers had left the area.

Gaskin said the angry crowd was reacting to a "trauma."

"Anytime you have this type of event that's taken place, emotions are going to run high," he said. "But for 600 people to gather around an area to see where a man is lying in the street, that means something happened that should have not happened."