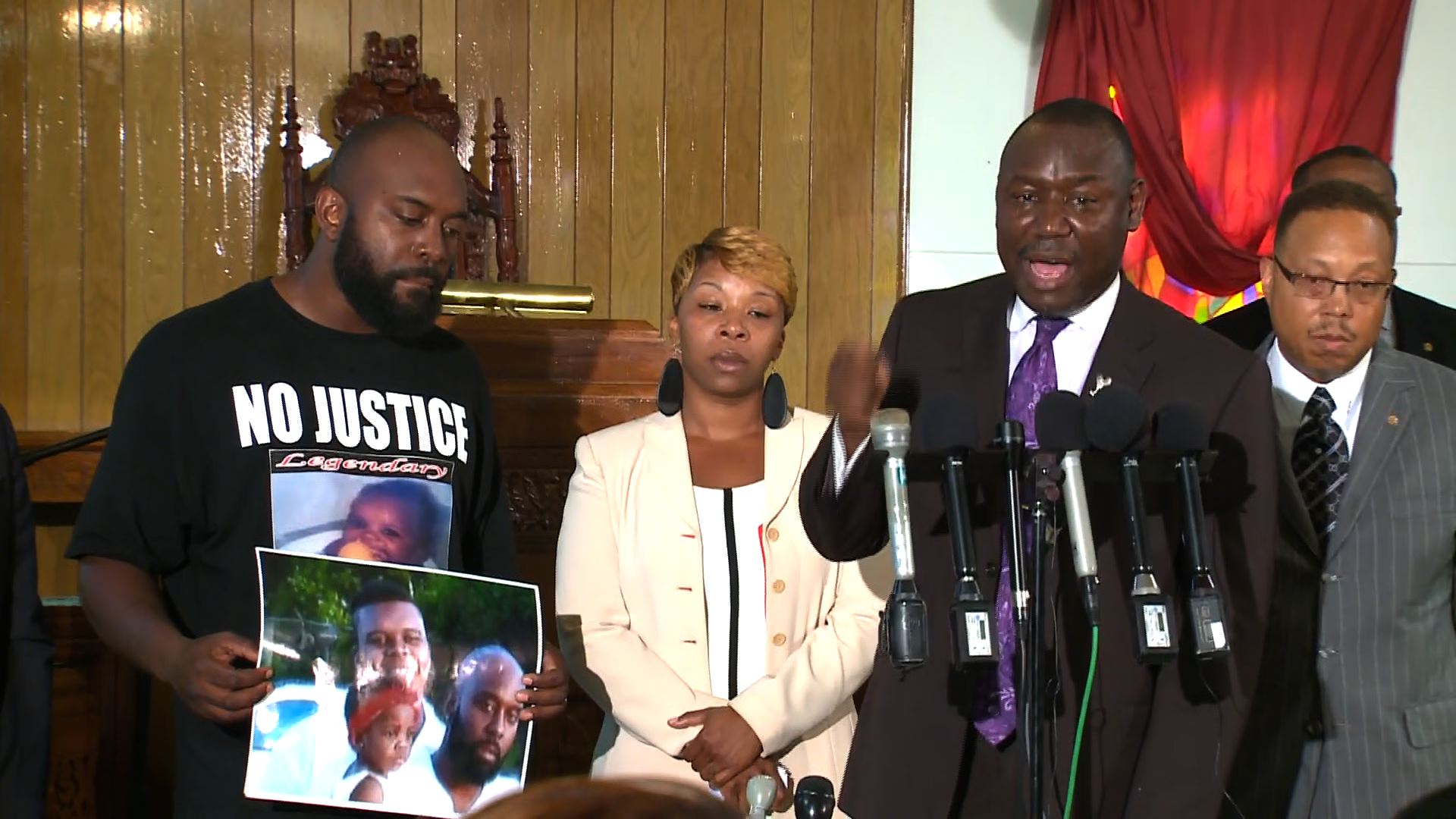 FERGUSON, Mo. - The parents of slain suburban St. Louis teen Michael Brown appeared at a news conference in tears and demanding justice in the wake of the shooting Saturday that sparked vigils and demonstrations where thousands marched and prompted a federal investigation.

"We need justice for our son," said Brown's father, Louis Head, standing beside his wife Lesley McSpadden, who was barely able to stand behind a podium, slumped over with grief.

The parents were joined by their representing attorney Benjamin Crump, who represented the family of Trayvon Martin during the trial of George Zimmerman last year.

"I don't want to sugarcoat it, their baby was executed in broad daylight," Crump said of the 18-year-old who was unarmed when he was shot by a Ferguson, Mo., police officer. "That's why people are frustrated.

He said Brown's parents have called for calm as the investigation into the shooting proceeds.

"Respect how they raised him in the fact that he was a nonviolent kid," he said. He also called for any witnesses who recorded video or took pictures and do not feel comfortable giving them to local law enforcement that it could be given to the local NAACP, the family or the attorneys representing them.

"We want you in the public to know if you were a witness to what happened, don't feel intimidated come forward."

Meanwhile, the FBI has announced that it is investigating possible civil rights violations in the case.

Cheryl Mimura, a spokeswoman for the FBI's St. Louis field office, says the agency is monitoring the case and working with St. Louis County police. The FBI has stressed that it is not taking over the investigation from local officials.

In addition, Attorney General Eric Holder announced Monday that the Justice Department and the U.S. Attorney's Office will also launch a probe into Brown's death.

"The federal investigation will supplement, rather than supplant, the inquiry by local authorities," Holder said in a statement. "At every step, we will work with the local investigators, who should be prepared to complete a thorough, fair investigation in their own right. I will continue to receive regular updates on this matter in the coming days."

A candlelight vigil for Brown was held Sunday, and tensions erupted later that night. Nearly three dozen people were arrested after a crowd looted and burned stores, vandalized vehicles and taunted officers.

Mimura noted that the FBI would be investigating such a shooting regardless of the public attention.

The details of the case appear to be in dispute between law enforcement and locals who said they witnessed it.

St. Louis County Police Chief Jon Belmar said the shooting occurred after an officer encountered Brown and another man outside an apartment complex in Ferguson.

The struggle spilled out into the street, where Brown was shot multiple times. Belmar said the exact number of shots wasn't known and that all shell casings at the scene matched the officer's gun. Police were investigating why the officer shot Brown, who police have confirmed was unarmed.

Jackson said the second person has not been arrested or charged and it wasn't clear if he was armed.

But that wasn't a satisfactory answer for some demonstrators.

"The man had his hands up and said 'don't shoot me.' Why was he shot," asked one St. Louis protester of Jackson.

"They have a valid point, Jackson told CBS News. "But the fact is that we don't know what happened."

Dorian Johnson told CBS News' Julian Johnson that he was with Michael Brown during the incident, and he had a different account. Johnson said the officer pulled up next to the two teens and exchanged words with them before choking Brown and trying to pull him into the squad car. The officer, he said, then exited his car, fired a shot and chased after Brown, who was running for his life.

"[The officer's] weapon was already drawn when he got out of the car," said Johnson. "He shot again and once my friend felt that shot, he turned around and put his hands in the air and he started to get down, but the officer still approached with his weapon drawn and he fired several more shots, and my friend died."

Ferguson Police Chief Tom Jackson told KSDK-TV there's no video footage of the shooting from the apartment complex, or from any police cruiser dashboard cameras or body-worn cameras that the department recently bought but hasn't yet put to use.

The name of the officer involved has not been released, officials say, but he has been placed on paid administrative leave.