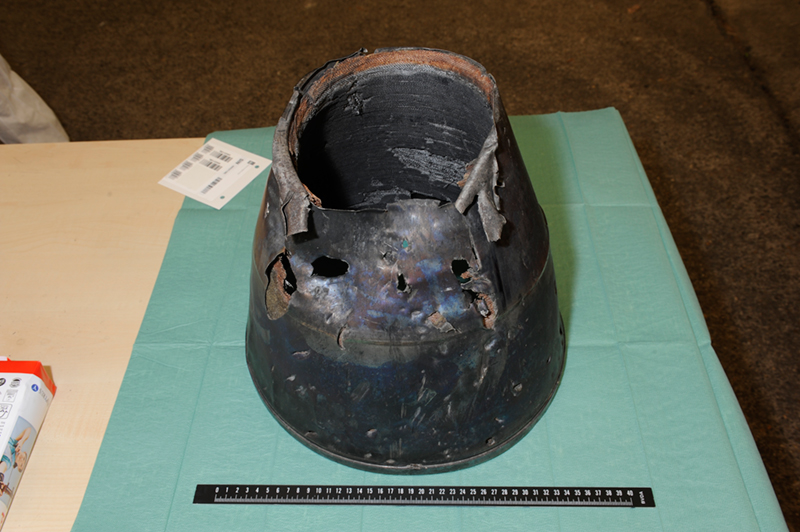 The Dutch criminal investigation into the downing of Malaysia Airlines Flight 17 over war-torn eastern Ukraine has released a report detailing the pain-staking forensic process of piecing together the clues to the tragedy, and a photo of part of the missile believed to have done it.

The investigation into the Flight 17 crash is split into two groups in the Netherlands; the Dutch Safety Board (DSB) investigation, which looked at what brought the plane down, and the Joint Investigation Team, which represents the criminal investigation.

The DSB published their report in October 2015, focused on the cause of the crash and concluding that the plane was brought down by a warhead on a Russian-made BUK missile. The DSB reconstructed part of the plane to show how the explosion hit the cockpit and caused the front of the plane to separate, sending the rest of the fuselage into a freefall.

The JIT published its updated on the investigation in an online magazine, which goes to great lengths to explain that the team is checking and double checking all of the sources of its information as it is "dealing with a conflict involving several parties" -- namely the Ukrainian government and Russian-backed rebels who hold the ground where the plane fell, and who are accused by the U.S. and the Ukrainians of firing the missile.

"Everything we investigate is a point of discussion," JIT team leader Gerrit Thiry says in the report. "We have nothing of which we know for sure whether it is true and genuine. After all, we are dealing with a conflict involving several parties. These parties may have an interest in manipulating or contaminating material. Therefore, we continuously ask ourselves what could be the interest of a source to distribute certain information."

The online magazine includes the first published image of part of the BUK missile believed to have hit the plane -- a "Venturi" component found at the rear of a BUK from which propellant gas is expelled "similar to the exhaust of a car," according to the JIT.

The missile part was found amid the plane wreckage, the report says.

But Thiry says his team is still mired in the "difficult task" of figuring out whether such a missile could have been launched unintentionally, or could have hit inadvertently hit the passenger jet flying from Amsterdam to Kuala Lumpur on July 17, 2014, killing all 298 people on board at the height of fighting in the Ukraine conflict.

The families of six crew members on Flight 17 filed lawsuits earlier this year against the airline, accusing it of negligence and breach of contract. The families are seeking general damages for loss of support and services, damages for pain, suffering and stress, among others.

Families of seven passengers from Australia, New Zealand and Malaysia sued Russia and its president, Vladimir Putin, in January over their alleged involvement in the incident.

They filed the lawsuits in the European Court of Human Rights seeking damages of $10 million per passenger.