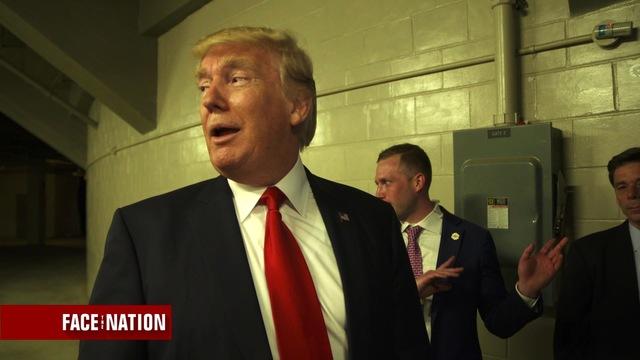 President Donald Trump said in a recent interview with CBS News that Mexico will "be very happy to pay" for a wall along the U.S.-Mexico border.

"Face the Nation" moderator John Dickerson interviewed Mr. Trump behind the scenes of his rally last Saturday in Harrisburg, Pennsylvania. As the president was preparing to walk onstage, chants of "Build that wall!" echoed from the audience in the rally hall.

"Can you hear that, John?" The president asked. "Believe me, that's what they want."

"Do you think they care about how it's paid for?" Dickerson asked.

"Oh, Mexico is going to pay," the president replied.

Dickerson followed up, "A hundred percent – the whole thing?"

"A hundred percent," the president replied. "They're going to be happy with it. They'll be very happy to pay."

During the campaign and since he's assumed office, Mr. Trump has repeatedly claimed that he will build a wall along the U.S.-Mexico border, and that Mexico will pay for it. More recently, however, Mr. Trump has said the U.S. will finance the wall initially, to get started more quickly, and Mexico will reimburse the U.S. at a later date.

The government spending agreement agreed upon by Republicans and Democrats in Congress late Sunday does not include any money to fund the construction of a border wall. It does include $1.5 billion that can be used to increase border security, however.

Sunday: McCullough, Tracy and a look at faith in America