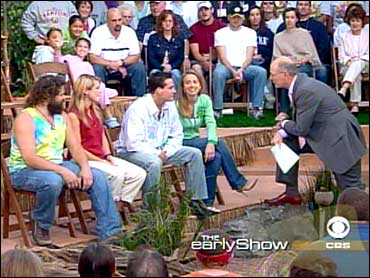 In CBS's two-hour special on Sunday, Boston Rob Mariano and Amber Brkich were left after voting off two other contestants, Rupert Boneham of Indianapolis and Jenna Lewis, from New Hampshire.

And some of the people they voted out earlier in the game had little nice to say about them. Both expressed some contrition for broken alliances and friendships gone sour.

Lewis had a chance to change the game if she had stuck to her alliance with Boneham, but she tells The Early Show co-anchor Harry Smith the bottom line is she wanted to put fate into her own hands.

"I would rather take my chances," she says. "I could have beat Rob in the finals."

Sticking with Rupert would have meant a tie, settled by having the three each pick a rock with the person picking the purple rock ousted from the game.

Bonehan for his part says, "I saw Jenna and I sitting there in the final two and I tried to tell her that Rob would have drawn the rock." Amber had immunity and would not have been ousted.

Lewis notes, "I was really torn. Actually, it changed every second until I got up to the vote. It really did."

Along the way, it seems he picked up a following. The audience sitting at New York's Madison Square Garden for the finale cheered Boneham every time he spoke.

It is one reason some expect him to win the second million-dollar prize. "Survivor" is granting the prize to a contestant chosen by viewers.

Co-anchor Julie Chen predicts Jerri Manthey will be the dark horse in this race taking home the money. Sunday was a very emotional night for Manthey who decided to leave the show after the audience booed her while she was speaking her mind. She said she met her family and boyfriend backstage.

"I went to the people that love me and support me no matter what," she says. "And that's what I needed at that point."

She was particularly upset because she didn't get to finish making her point. She says, "My point was that this show is for entertainment and it comes at a price. And for some of us the cost is friendships and feelings."

Mariano's take-no-prisoners style during the game earned him his share of enemies. The final tribal council brought one contestant to tears as she described how he betrayed her, and led another to pull away his hand after offering a shake.

Today, Van den Berghe seems to hold no grudges. He says, "I wish these guys (Mariano and Brkich) the best of luck. I've been a happy man for 16 years with my wife. If they can be half as happy as I've been, the world is a better place."

Manthey, for her part says, "If these two are truly in love, then at least something good came out of our experience."

As for her relationship with Colby Donaldson, Manthey says it will take time to mend. "There are still feelings that are involved. I'm hoping that someday we can all be in the same room and look each other in the eye and have a good time together."

So has Big Tom Buchanan buried the hatchet with Boston Rob?

"I buried it in his back," he says tongue-in-cheek. "I'm 48 years old and I hope I'm mature enough to -- you know, he's basically the same age as my son. And, you know, with my age, it's hard to say. I'm not going to hold a grudge. And I think me and Rob will get along all right."

And Kathy Vavrick O'Brien says, "You can't let emotion get into the game. No emotion."

Former "Survivor" winner Richard Hatch notes it is just a game. Pointing at the 18 "All-Stars," he says, "There's no question that everybody up here, they're all good people. They're just guys and gals that got chosen for this game and we went out and played the game. The game is a funny game. There's a lot of stuff that goes on. It's a tough game. When I say it's a game, I don't mean it's an easy game. It's a really tough game."

Sue Hawk did not even mention the unpleasant incident she had with Hatch; she was too happy with the makeover she got. "They did it five weeks ago and I definitely healed," Hawk says, "and it's going to air the end of May - the whole shebang."

Colby Donaldson and Shii Ann Huang said they had made peace and are still friends. "I think we both realized it was a game," Donaldson says. "We didn't see eye to eye during the game but it's just that. We get along great."

Huang was the swing vote giving Brkich the win. Asked the reason behind her vote, she tells Chen, "She deserved my vote because she played a great game. She didn't get enough credit for it. She was strategizing the whole game. She went under the radar and made it all the way past all of these power players. I voted for her not because I dislike Rob or I thought his game was cruel. I voted for her because I really felt she deserved to win a million dollars. She repaid me in kind with a car. Thank you so much."

Amber was given the opportunity to award another prize - a car- to one other contestant in the game. She chose Huang.

As for Jenna Morasca, she says she does not regret her decision to initially play the game and then to leave in the middle to be with her dying mother. "I'm good," she says. "I've got a good group of family and friends. I'm doing great. Don't worry about me."

She is actually enjoying her relationship with Ethan Zohn.

By a show of hands, Mariano would have won, had all 18 "Survivors cast" their vote. Mariano essentially won the prize for his sweetie. In the second-to-last tribal council, he had a choice of voting off Brkich or Lewis, and chose to keep his girlfriend beside him.

In all "Survivor" host Jeff Probst notes he is not surprised with the outcome. "Nobody would have surprised me. In this case, everybody here was picked because we knew they would play this game all the way. Look at a guy like (Rob) Cesternino. Didn't even talk to him last night in the live show. He made zero impact in this season. One of the most popular guys to play the game, Rob, it's true. He's still mad at me for not talking to him. But my point is, he's a great student of 'Survivor,' very funny, quick witted, but you have 17 others. Rudy and Shii Ann - who would think she would be the deciding vote?"

Certernino admits being in the sidelines was quite frustrating for him. "There were a lot of things I felt like I could have shook up. I feel like I'm going to have my redemption on Thursday night if people can vote for me to win that million dollars and make things right."

He was not the only one who made a plea to win the second million dollars. Rudy Boesch says, "If I win the million dollars, I'm going to donate $500,000 to the wives and kids of my buddies in Iraq that are getting killed."

Asked Boneham what he thinks about that, he says, "That's OK."