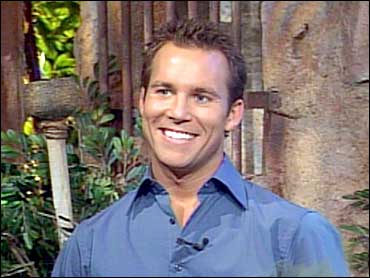 There was a big power shift on "Survivor: All-Stars" this week, and Colby paid the price.

Fans of "Survivor" remember that Colby Donaldson dominated the challenges during "Survivor's" second season and apparently the other all-stars were watching, too. On Thursday night, his tribe sent him packing before he could run away with the million-dollar prize.

At tribal council, Shii Ann singled him out as the one with the most strength, something Colby tells The Early Show co-anchor Harry Smith that surpised him by its timing, although he knew it was going to be an issue down the line.

"Everyone knew how far I had gone in Australia as far as the challenges," he says, "I didn't think it would happen so soon."

Though they were in an alliance together, it was Lex who came up with the plot to get rid of Colby.

"You would be a fool to trust him all the time. I was hoping I could," Colby says about Lex. "But deep down inside, I didn't know if I could. He was a great player. He was strong, because he had me convinced that I was OK, at least for one more Tribal Council. I knew I was on borrowed time. I just wanted to make it as far as I could and try to get into an individual situation where then we could all compete toe-to-toe but it didn't work out."

In the few weeks, Colby stood out as the one making the decisions about who to bring in and who to kick out, as well as having frank discussions with Shii Ann, who was the swing vote.

At Tribal Council, she stated while writing his name down, "You have underestimated my powers. Maybe you should spend some time analyzing your own."

Asked about that quote, Colby says, for him, a more interesting one is the one she made while on the beach wishing Kathy was with her and saying: "My one ally," meaning Kathy, "is off on a boat somewhere enjoying..."

Colby says Kathy was Shii Ann's decision maker and "that's where I think she was lost. She is whom Shii Ann would have gone to, asking: 'Who are we voting for?' Without having Kathy decide for her, she was up in the air. She talked about, throughout the episode, her feelings about Jerri and how distraught she was about that and then ultimately voted for me."

While talking to Ethan, Colby had even bragged about what he was going to say to Jerri when he voted for her, but at the end Colby just shrugged his shoulder and cast his vote.

Asked by a caller why he decided to stay quiet, Colby says," The reason I didn't, not to sound cliché, but if you don't have anything good to say, just don't say anything at all. A lot of people use that time when they cast a vote to get malicious or say things that are negative. I didn't know if Jerri was going to get voted out. I didn't know if it would be me or her. I wasn't going to get cocky and say: 'See ya later."

So with a big smile, he says he is glad now he didn't do it and "have to eat humble pie." But he did get a dig in, telling Smith, "I'm just glad after 3 1/2 years Jerri finally got her revenge. A lot of sleepless nights, I'm sure, she had waiting to take it out on me."

As for his game, he explains to a caller that he used the same strategy as he did in Australia.

"I wanted to play it as straight up and as hard as I could. It is the competition that drew me in. I just caught a lot of flak after the first show for quote/unquote giving it to Tina and letting her win. I have never lost a night of sleep thinking about that. I don't regret anything. That was one reason I wanted to go back, was to play it the same way again and show that it could be done. Didn't work out."

He points out the alpha-male image he portrayed was not about control. "It was maintaining strength in the tribe. So what kind of appeared as me being a puppet master or really calling the shots was a situation where it was Lex and Kathy and I the strength and then bringing Ethan along, you know, making things work in our benefit."

Ethan voted in agreement with Colby, not knowing what was going on behind his back. Colby tells The Early Show co-anchor Julie Chen, "I think it was as big a shock to Ethan as it was for me because obviously they left him out of the loop when they made this decision to get rid of me. As Lex pointed out in the show, they didn't need him. They knew they had three votes. Which direction Kathy would have gone, we don't know and we'll never know."

And although his strength was his demise, he tells a caller he is not so sure how Mogo Mogo tribe will fare without him.

He says, "Just depends on what the challenge is. I think I was an asset to the team. But I guess next week we'll find out. I don't know how they'll do. They do still have Ethan and Lex. They're amazing. They're great in the water.

"That's one thing I wish we could have seen more of, as a viewer, is just how much fun we had. We were going out every day and clamming and bringing back dozens and dozens of clam to eat. The three of us would. That was something we had a lot of fun doing. There was a lot of camaraderie between Ethan and Lex and I," he says.

As to why he decided to bring Ethan to the tribe, Colby explains, "We brought him on mainly so we didn't have to compete against him anymore. He is such an athlete and such a competitor."

And yet it was Ethan who in part was guilty of losing the reward-immunity challenge. Colby however does not put the whole blame on the "Survivor: Africa" winner.

Colby says, "As soon as we got back to camp, he not only apologized to the entire tribe but he and I talked privately and he said, 'I muffed it.' But we had a chance to win. We came back and our raft was side by side and we didn't pull it off. So the blame can't all go to Ethan."

Another particular challenge, some say Mogo Mogo should not have lost and even Jeff Probst admitted he had made a bad call, was the one in which Colby and Boston Rob were on the balance beam. It looked as if Colby had fallen into the water first but after careful viewing, it was Boston Rob's foot that hit the water first.

But Colby tells Chen, "I may have won that particular battle with Rob, as that footage showed. But that doesn't mean our tribe won that challenge. I think we got beat by three flags."

So Colby says he harbors no hard feelings against his good friend Probst. "Super Bowls are won and lost on judgment calls. That's what Jeff is there to do. We know that as players. It was up to him. Unfortunately, that was a call that he missed. But I'll take it out on him on the poker table," he says.

Since his first "Survivor" game, Colby got a gig on the Schick razor ads. Ironically, he says he hardly ever shaves.

But, he adds, "After the game, I shaved my head. There were so many sand fleas over there; the bugs were so bad, I couldn't ever get them out of my scalp after the game. I took a razor, Schick Quattro, mind you, and shaved my head. We should have done that for a commercial."

And that is not all. Colby was recently seen on the HBO TV show, "Curb Your Enthusiasm," which he says was a lot of fun.

He says, "There have been some victories. I've been out there two years pursuing acting. This was a blast to do Larry David's show and be in that company."

The following is a recap of Thursday's episode:

After a close defeat in a combo reward-immunity challenge, Mogo Mogo faced tribal council. This week's combined reward and immunity challenge featured an especially tasty reward: the winning tribe got off the island to spend a night on a luxurious 94-foot yacht for a barbecue with everything from burgers to dessert to a champagne toast.

The winning tribe also got to choose a member from the losing tribe to take with them, not only to enjoy the festivities, but also to avoid the tribal council, thus protecting them from being voted off.

During the challenge, each tribe started on a floating platform, where one member swam out for puzzle pieces to form a giant floating puzzle-boat. Once the boat was together, the whole tribe sailed to shore, where a member of each tribe raced into the jungle to gather oars and sail back to the platform. After a very tight race with several flip-flops, Chapera won. They chose Kathy to join them for the reward.

Impressed with Chapera's happy-go-lucky spirit and camaraderie, Kathy began mulling the possibility of switching allegiance to their tribe in the future. Of course, she didn't plan to mention this to her fellow tribe members at Mogo Mogo. For their part, the rest of Chapera was juicing Kathy for information about her tribe over margaritas.

Back at Mogo Mogo, spirits were dragging and everyone was on edge following such a huge loss and facing the inevitable tribal council. Ethan took responsibility for his team's loss.

Although tensions were rising between Shii Ann and Jerri, Colby was the one who especially couldn't wait to vote Jerri off the tribe.

The plan seemed solid until Lex pulled a fast one. His prior alliance with Jerri proved solid, at least this time, and prevented him from going along with the plan to oust her. Instead he formed a sub-alliance with Jerri and Shii Ann to vote Colby off in a last minute curveball.

Colby was surprisingly perky after being thrown off the island.

"Tonight was probably as polar opposite from my first experience in 'Survivor,'" he said. "Every tribal council I was never voted out, but the inevitable bonus of playing this game again is simply once again proving to yourself that you can do it."