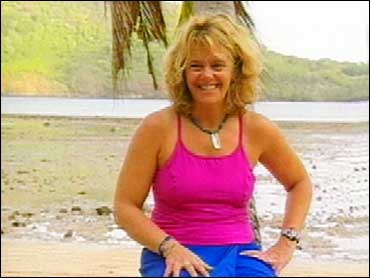 The "Survivors" were also battling a bout of severe blues brought on by relentless rain showers, dreary skies and ever-increasing homesickness. A combination reward/immunity challenge that ended in hot chocolate, letters and videos from home temporarily bolstered spirits before serious game-playing took off, eventually leaving Kathy high-and-dry at the latest tribal council.

Bemoaning her decision to trust Boston Rob, she left the game becoming the second member of the Survivor jury.

Players talked strategy to the camera before being summoned to the joint reward/immunity obstacle course that ended with a battle of wits as players scrambled to solve a puzzle game.

At the challenge, the tribe divided into two four-member teams, racing through an obstacle course that included balance beams, walls to scale, rope ladders to climb and tightropes to walk.

The four members of the winning team in the reward challenge – Boston Rob, Alicia, Amber and Shii Ann – advanced to the immunity challenge, which was a puzzle piece game.

Sly's Many Faces In 'Spy Kids'

Players struggled to find the right alignment of pieces to release one containing a knife. The first to get the knife and cut free a flag won immunity.

Proving he has at least a little brain to go with the brawn, Boston Rob was the winner, scoring immunity for the a second consecutive tribal council.

For reward, the four winning players received a rain poncho and a letter from home. As immunity winner, Boston Rob was also in line to receive a video message from his brother.

In a surprising gesture that was part good will, and certainly part strategy, he sacrificed his video and instead requested all Survivors be given their letters from home.

Back at camp, Shii Ann and Kathy, the last remaining members of the original Mogo Mogo tribe, clambered to sway votes and form new alliances. The maneuvers saved Shii Ann, but the target stayed on Kathy's back and when votes were tallied, she was ousted from the game.

"I can't believe I got voted off. I thought Rob would be there for me. It was a stupid play," she said in her parting commentary. "That's what happens when you put too much trust and loyalty into your thought process out here. I wish I got further."