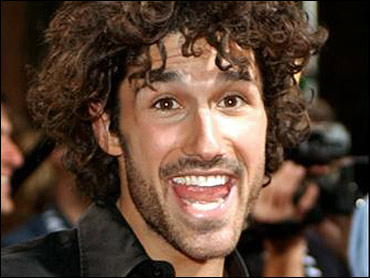 Despite efforts to turn the tables in his favor, Ethan Zohn, the last remaining champion from a previous "Survivor" season, was kicked out of the All-Star game, but not before Lex, the man who helped him get to the top of the game in Africa, told him that this time, it was Ethan's turn to go.

Ethan tells The Early Show co-anchor Julie Chen,"I had a couple of issues with that whole situation. He wants to play the game business-like and it's all about business and not money, and friendship is not involved. Then he takes me off as his buddy and tells me. You can't have your cake and eat it, too. That got to me. Either you'll play business or be my friend, one or the other."

Ethan confesses he was very angry at his friend, but now all is well between them. "I realize it's just a game. It was fun and he had to do what he had to do. I don't think it was the smartest decision in the world. Now you have a tribe of Lex, Kathy, Shii Ann and Jerri. You are not going to win. You voted off the two strongest: Colby and me."

And yet, Ethan knew since he joined Mogo Mogo, his days were numbered. Last week, he blew the immunity challenge having had a huge lead and later breaking the oar. In his defense, he says, "Those props aren't made well."

And even during this week's log-roll challenge, he hit the water before his opponent, which a caller says was surprising considering that Ethan is a professional soccer player.

"It's difficult," Ethan says. "I won the first one against Rupert, and Boston Rob and I battled it out, and he won at that point. It's definitely harder than it looks. We didn't have much weight to push the logs back and forth. We were pretty skinny at that point."

But that was not the challenge that mattered most. Jerri, who started enjoying her victory after seeing Colby exit before her, finished poorly after missing the target in an archery competition for immunity.

"That still kills me," Ethan exclaims about the decision to have Jerri represent the tribe because she claimed to have training in archery. " Both Lex and I volunteered because in Africa, we had this bow-and-arrow challenge. I hit three targets and Lex hit three of the targets. Jerri claimed she was an accomplished archer. Shii Ann and Kathy were on her side as well. It's tough."

It was particularly hard for Ethan to know that he was going to go before Jerri and he says that, while he had the chance, he did everything he could to persuade others to vote her off instead.

He says, "You do everything possible that you can to switch the votes, to swing things. Up to the final second, when Jerri was voting, I said, 'Lex, you still have a chance, you can vote for Jerri, you can do this thing.' Obviously, it didn't work so well."

Numerous times, Ethan mentioned he knew going in that he had a big target on his back. "You always hope you can win. It was so obvious that no winner had a chance of making it to the end," he says.

And reflecting on his tribe, he notes, "I think Jerri and I have been to every Tribal Council but one, and I amazed myself that we made it this far. And it's tough to be a winner going into that thing. Everybody is a little bit resentful and no one wants to see you win again."

Asked by a caller if his friendship with Big Tom would have helped him if Ethan had been on the other team, Ethan says, "I would like to think it would. I've spoken with Tom since and he seems to think that any sort of past relationship with me, with people, would make him a target if we were together because everybody knows we're friends. We're friends outside of the show. So he would have been a little concerned. But I think it would have worked out. We have a strong relationship as well."

Though not many people give him credit for his game, Ethan says he would like to see Big Tom do well.

Ethan says if Lex makes it to the final two, his strategy may work both for and against him. He explains, "You can either reward him for playing that way and sticking to it and respect that, you know, he got that way by stabbing people in the back and treating people unfairly. Or you can go on the other side and say, 'No way am I voting for that guy, he's a jerk.'"

As for the other players, he says about the romance between Boston Rob and Amber, "In terms of strategy, I wouldn't go that way. Just because if I see two people with such a strong bond, I want to separate them as quickly as possible. But I give them credit. If they can find true romance in a game like this, more power to them."

A report in TV Guide has linked Ethan with former "Survivor" winner, Jenna Morasca. She is quoted saying about Ethan, "You can't know him and not love him. Things are going fantastic."

About that, Ethan says, "W're best friends and really close. I'm surrounded in my life by people I like a lot." Pointing out they are both million-dollar winners he jokingly says, "$2 million is better than one."

And as for him, he still has mixed feelings about whether he had fun or not playing the All-Stars game.

He explains, "The second time around, the novelty had worn off. It wasn't new and exciting and I knew I was going to be hungry. I knew I was going to be tired and cold and wet and miserable so you're just kind of waiting. Each day was like a dog day. It was like seven months -felt like the longest day. In hindsight, maybe it was a little fun because you got to play again. I love the game and love the competition and that was fun but it was pretty miserable the whole time."

The following is a recap of Wednesday's episode:

It was another good week for the Chapera tribe, and another awful one for Mogo Mogo, on this week's episode of "Survivor: All-Stars." After losing both the reward and immunity challenge, Mogo Mogo faced tribal council.

For the reward challenge, a representative from each tribe had to choose three items from the rival tribe's camp to play for.

The challenge itself was a log roll in which members from rival tribes faced off -- man-to-man, woman-to-woman -- spinning on the same log until one fell into the water. The first tribe to reach five points won. Chapera continued its winning streak, entitling it to Mogo Mogo's grill, a bag of rice and the Hawaiian sling -- a sure-fire fishing spear.

Jenna Lewis, Chapera's representative, arrived to take the goods, but as a gesture of good will, she dropped off some toiletries, including toilet paper, a bar of soap and a toothbrush.

Meanwhile at Chapera, Boston Rob and Amber have become romantically involved, which could cause problems down the road. The addition of the Hawaiian Sling diminished Rupert's unique role as food provider, prompting Rob M. to question Rupert's value.

The immunity challenge tested the tribe's skills with various weapons: a blowgun, a spear and a bow-and-arrow. Chapera, once again, won immunity, and Mogo Mogo faced tribal council for another week, after Jerri lost the tie-breaking bow-and-arrow contest.

Jerri might've been voted off for her mistake, but Lex -- owing primarily to his alliance with Jerri and his determination to play a different kind of game than he has in the past -- had designs to have Ethan thrown off instead. Lex's plan held firm, and Ethan - the last remaining winner from another season of "Survivor" - was thrown off the island.