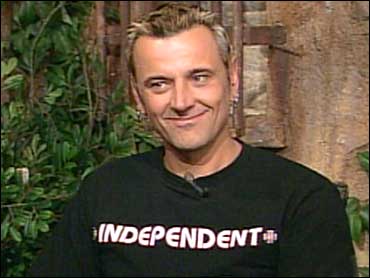 The "Survivor: All-Stars" got their long-awaited merge on Thursday night's episode, renaming themselves Chaboga Mogo in a combination of the three separate tribe names.

With the merge came compromising situations and some double-crossing of past alliances that ultimately led to Lex van den Berghe being voted out of the game, and becoming the first member of the jury.

Amber Brkich found herself trapped between promises to rival castaways: she made a pact with Kathy and Lex to persuade them to vote off Jerri instead of her last week, and had a previous deal with the members of the original Chapera tribe.

Robert "Boston Rob" Mariano had promised to help Lex get further along to win the $1 million prize if he kept Amber in the game, but backpedaled and began maneuvers to give Lex the boot almost immediately after the merge.

An incredulous Lex bemoaned his decision to trust Boston Rob and said he felt Rob had not only resorted to dirty game tactics, but had betrayed their friendship.

On The Early Show Friday morning, co-anchor Harry Smith clarified the relationship between Lex and Boston Rob. Although they had not previously played "Survivor" together, they had become friends over the last couple of years.

"As many 'Survivor' alumni do, we got to be close," Lex explained, adding, "I was the guy he would call if he was breaking up with his girlfriend. He would call me or my wife practically in tears."

When Rob told Lex that he would "take care of him" if he protected Amber, Lex said he did not think twice about Rob's loyalty.

"He was definitely coming to me and asking me to help him," he explained. "I'm the kind of guy, I'm loyal to a fault. I will do anything for my friends. I'll jump into fire for friends. He asked me to do something for him. Of course, I could only deliver.

"Honestly, I don't regret it. I would probably do it all over again. I'm not bitter about the game, about losing the game, losing a million dollars. It was harder for me to be betrayed by a friend than walk away from the million dollars."

When Rob told Lex that he was cutting him loose, Lex said he was devastated. "I was more than anything else heartbroken that somebody would do that to me, a friend would do that to me. And, you know, that's the thing that I still have to live with now."

During the Tribal Council, did he think Kathy was going to give him her immunity necklace?

"No," Lex replied. "We discussed that quite a bit, because I knew I was on the block. And she said, 'I will give you the necklace.' I kept insisting, 'No, I don't want the necklace. I don't want to stay in the game that way. You earned it.'"

Although it may have appeared that Lex was shocked when Kathy kept immunity, Lex said he was actually relieved and grateful.

Later on The Early Show, viewers were invited to call in with questions, and a woman from North Carolina wanted to know if Lex thinks that Rupert, Tom and the others realized what they gave Boston Rob in allowing him to totally control the last Tribal Council. Do they realize what may be in store for them?

In reply, Lex said, "It's amazing to me that they don't know what is going on and how much control he has got. That's what is amazing to me: People don't seem to care. Rupert and big Tom, they willingly put themselves at the mercy of Boston Rob. And that's been their M.O. since the beginning of the game. They have chosen to give him their game and put him in the driver's seat. It's not a way I could play the game. Maybe, for them, it will work out."

Another caller, from Baltimore, wanted to know if Lex felt equally betrayed by Amber, and Lex said no, because he was a very close friend of Rob's outside of the game, and had a more casual friendship with Amber. Also, Amber did try to change Rob's mind about getting rid of Lex.

He explained, "She did say, 'I think we really owe him this favor.' And there was at least a shred of honor there. Rob decided to throw that to the wind."

But it took a 9-year-old viewer from Connecticut to ask the most important question of all: "Are you and Boston Rob still going to be friends?"

Lex's response: "I wish I could say we were still friends... The short answer to that is no. We are probably not going to be good friends.

"It's funny, because I got a 10- and 11-year-old son. Both of them, watching the episode, they understood it in such pure and simple terms. It was: A deal is a deal, a promise is a promise. When someone breaks that, they're not your friend.

When Harry suggested that they just had been playing a game, and Lex had lost sight of that, Lex said, "Wow. I guess you could say I did. I did. And the thing of it is…it's so easy to say, 'It's just a game.' … That phrase is thrown around so casually: 'It's just a game.' It might be a game for everybody watching from their living room. It's not a game to us. Even the people playing it, (when) they say it's a game, they're lying. For us, it's life. For those 27 days out there, it was life.

"Did I lose my eye on the prize? Perhaps I did. But I played it the only way I could, which is the way I am, the person that I am."


Here is a summary of Thursday night's episode:

The first water reward challenge was a close race between Rupert, Boston Rob and Lex as they raced through the surf to the shore toting heavy crates.

Rupert was the winner and chose Amber and Jenna to accompany him to his extravagant reward, which included a night's stay at a resort spa for a huge feast, massage, facial and a supply of toiletries, including deodorant for all and cosmetics for the women.

When the trio returned, the tribe faced a second water challenge, this time for individual immunity, but with a bizarre twist that resulted in a "Survivor" first: a double immunity winner – one male and one female.

Boston Rob and Kathy won the immunity challenge where contestants competed to hold their breath the longest, then released water buoys from the ocean floor.

Things got complicated back at camp as tribe members sorted through old alliances and powwowed on who to vote off. Amber warned Rob that they have their work cut out for them because they've made deals with nearly every tribe member.

Total chaos erupted for the castaways as they prepared for Tribal Council. Kathy considered giving her immunity to Lex, but in the end kept it. When the votes were tallied, Lex was sent packing.

"I'd be lying if I said I wasn't disappointed, but I came into this game the wealthiest man in the world. I have an amazing wife, two beautiful sons, a loving family and the greatest group of friends a man could ever hope for. Everything above and beyond that is gravy," Lex said in his departing commentary.