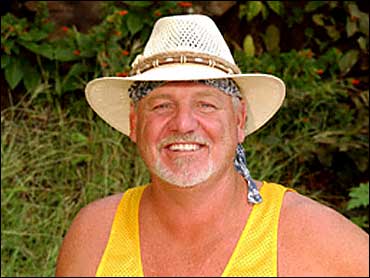 There is a lot at stake in the final episodes of "Survivor: All-Stars," and likewise, the game is growing more vicious.

On this week's episode, the contestants knew their marathon to the $1 million prize had turned into a heated sprint, and no one was to be trusted.

As Rupert Boneham and Jenna Lewis had a private strategy session discussing how to get rid of Robert "Boston Rob" Mariano, they were shocked to realize Rob was standing right behind them.

This week's reward challenge was a combination of classic challenges of the past, including a balance beam, a belly crawl, a puzzle and a basket launch. Amber and Boston Rob moved to the lead, winning the first round and moving onto the final — an obstacle course.

Rob won, and for his efforts he got a brand new truck, which he drove down the beach to a special drive-in movie theater with Amber, whom he chose to accompany him. The theater came complete with snack bar and one last surprise for Amber: another new car. They sat in the bed of the truck, eating popcorn and watched Lord of the Flies, the movie that originally inspired the Survivor series.

Back at camp, tensions grew as the contestants lost more energy and became more frustrated with the dwindling situation. When Rob and Amber returned refreshed from their movie night, Rob immediately began to stir things up between Rupert and Big Tom, hoping to dash alliances and save his neck.

He seemed to be at his manipulative best as he fueled the fiery fight between them.

The immunity challenge was a word scramble consisting of all the tribe names of previous Survivor seasons, which the contestants had to unscramble to uncover a final mystery word.

Again, Boston Rob came out on top, winning immunity, and cementing his spot in the final four.

Trying to decide who should be voted off, Rob and Amber confronted Big Tom with the question of whether he'd teamed up with Rupert and Jenna.

As a result of Tom's scrambling to maintain his past alliance, Mariano assured him he would honor their deal and not vote him off.

As Tribal Council loomed, the five remaining "All-Stars" felt targets on their backs. And Rupert predicted, "Paranoia will destroy ya."

When all the votes had been tallied, Big Tom took the fall and was voted off the game, proving once again that Boston Rob wields the power for the time being, and maintains loyalty to nobody.