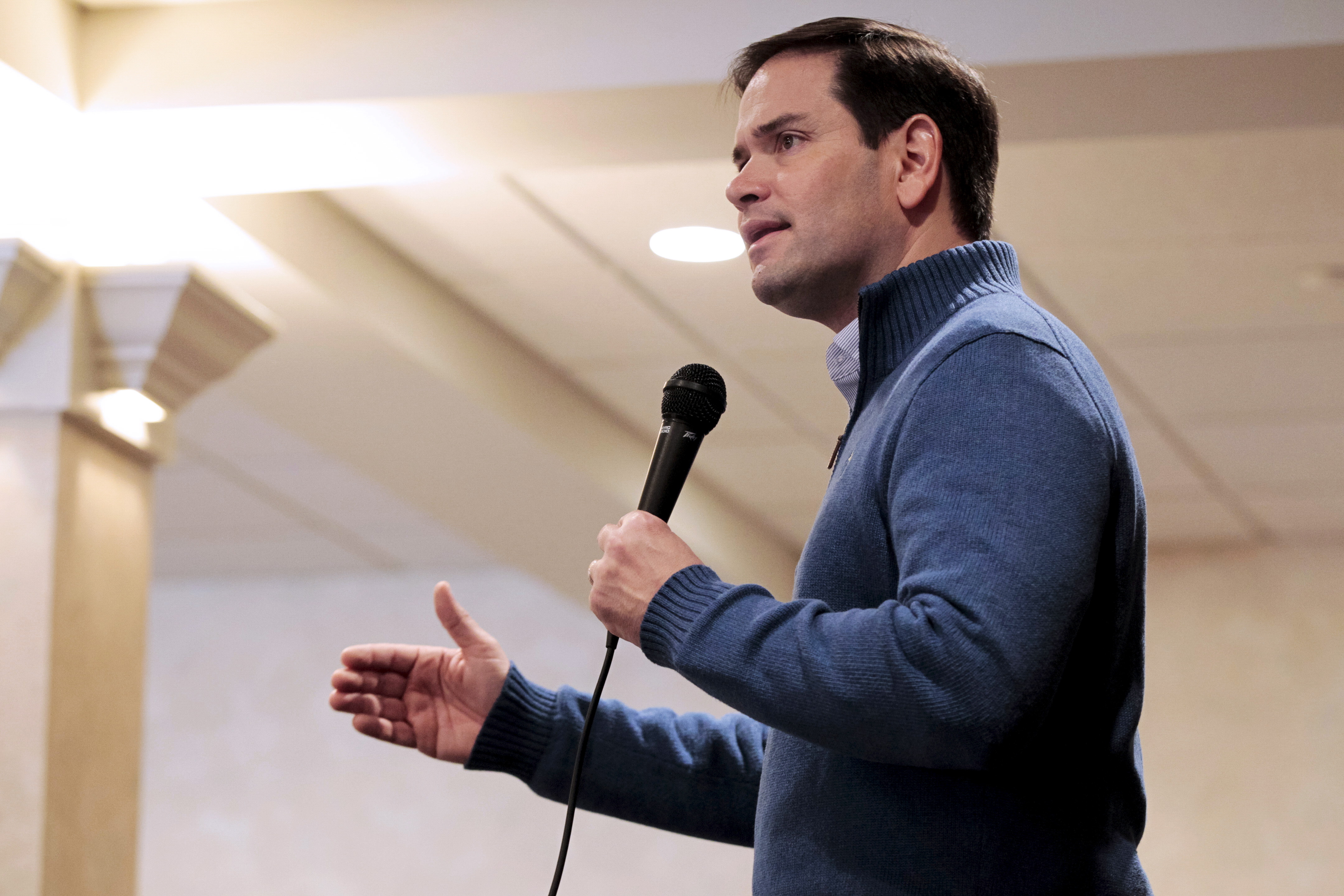 HOOKSETT, New Hampshire -- Sen. Marco Rubio reframed his national security argument around the eighth anniversary of Barack Obama's victory in the Iowa caucuses, calling it "a historic moment in global affairs" because since then, he "has deliberately weakened America."

Rubio used his speech to lambast the president's handling of foreign policy since he landed in the White House.

"He has made an intentional effort to humble us back to size as if to say 'We no longer need to be so powerful because our power has done more harm than good,'" Rubio said. "America is in far greater danger today than it was eight years ago."

And that danger, Rubio argued, will only be augmented if Hillary Clinton is elected.

Though Rubio stuck to indirect criticism of any Republican in his town hall speech Monday, he implied that fellow GOP Sen. Ted Cruz's plans for dispensing with ISIS are off base. Cruz has promised to "carpet bomb" ISIS until the desert sand glows - which Rubio used as fodder for his criticism.

"Words and political stunts cannot ensure our security. ISIS cannot be filibustered," Rubio said of Cruz, without mentioning him by name. "While some claim they would destroy ISIS, that they would make the sands of the Middle East 'glow in the dark,' my question is, with what? Because they certainly can't do it with the oldest and smallest Air Force in the history of this country, or with the smallest Army we've had since World War II, or with the smallest and oldest Navy we've had since 1915."

He also took aim at Rand Paul, whom he indirectly called an isolationist, and at Donald Trump, declaring the job description laid out in the Constitution does not include "entertainer-in-chief," "commentator-in-chief," or even "economist-in-chief."

One foreign policy issue Rubio did not bring up in his speech was escalating tension between Saudi Arabia and Iran over the execution of an Iranian cleric. Over the weekend, the Saudi embassy in Tehran was attacked by protesters.

After the event, Rubio told reporters the embassy attack "reveals the true nature of the criminal government that governs Iran" and that Iran has "no respect for international laws" or "norms of governance."

Rubio side-stepped the question of whether he was concerned about the executions in Saudi Arabia.

"I'm not a big fan of the judicial system in Saudi Arabia, and I don't know all the details behind this individual who was accused of plotting to overthrow the government, but the answer to that problem cannot be to allow protesters to storm an embassy." Rubio stated.

When asked how the U.S. should respond, "This is a situation between Saudi Arabia and Iran, it's not a situation directly with the United States" Rubio said.

According to a CBS News count, this marked Rubio's 19th trip to New Hampshire, and his second national security speech in the Granite State. The candidate told his audience in Hooksett "we're literally going to be here about every other day" over the next five weeks before New Hampshire votes on Feb. 9. He left for Iowa after the New Hampshire event ended.