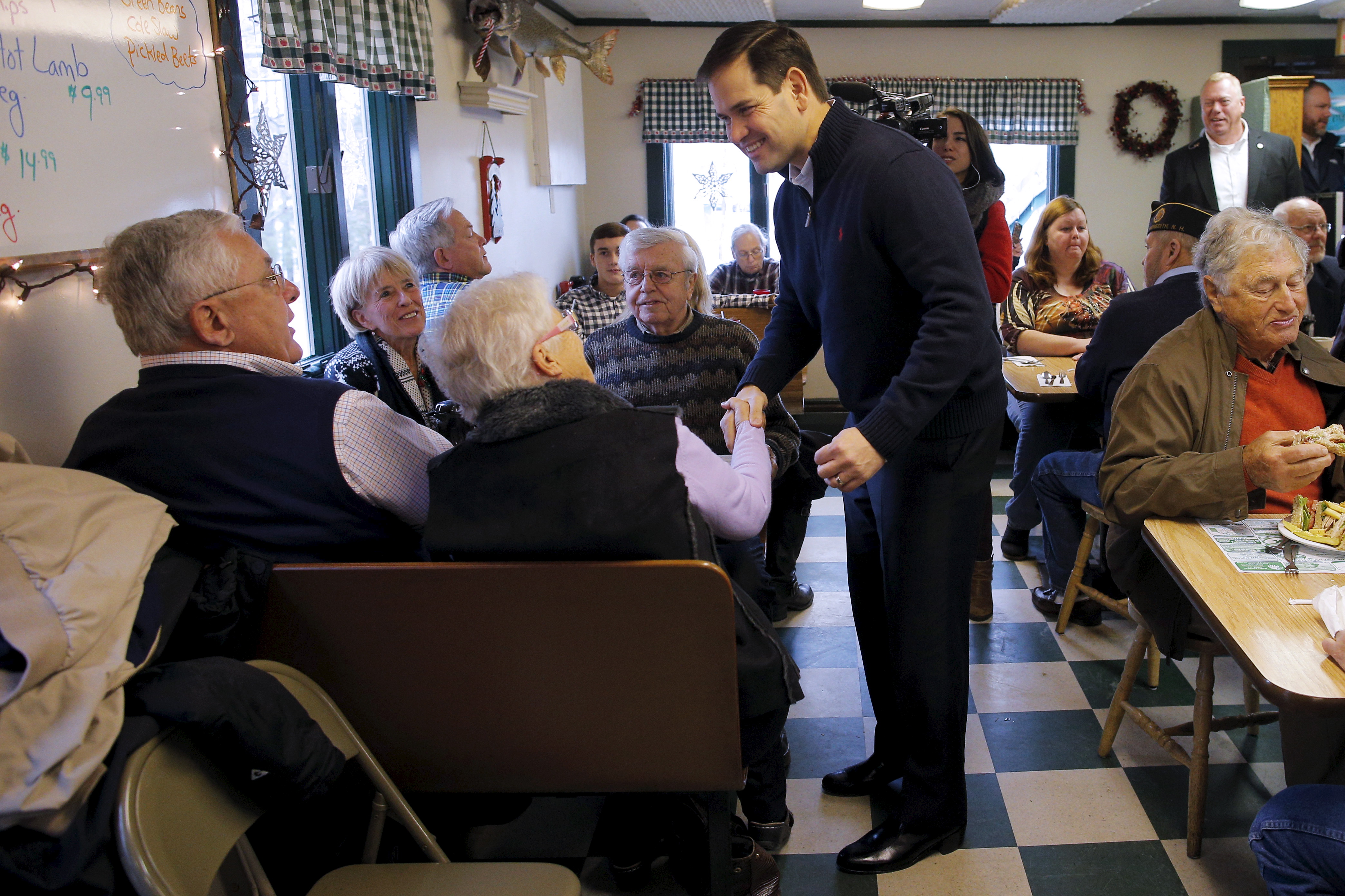 ROCHESTER, New Hampshire -- Marco Rubio's campaign style has a different look and feel -- in a departure from recent campaign stops, he's spending more time in close contact with voters -- the kind of true retail politicking that's necessary in a state like New Hampshire.

At a campaign event in Rochester Monday, he dispensed with the cordons at a town hall event that usually separate him from voters and stopped by a small town diner for some good old-fashioned retail politics.

Until now, Rubio's campaign events have more often than not been highly produced and made to look presidential with a roped-off stage, professional lighting and backdrops that often include a large American flag, a state flag and campaign signage. Entry and exit from events are roped off from the audience, allowing Rubio and his team to move quickly from one stop to the next and stay on schedule with media appearances, fundraising and other campaign events.

Monday's event looked different. Campaigning with his entire family seated in the front row, the ropes and barriers were gone.

Rubio spoke briefly before answering a wide range of questions in a town-hall setting, before stepping off stage and greeting voters in the center of the room.

Voters surrounded him, a stark difference from past events where the barriers made it more difficult for voters to interact with the senator and make a personal connection.

Those conversations with voters after an event often elicit more spontaneous conversation with the candidates, which helps these first-in-the-nation primary voters take their measure of the man.

After the town hall, one voter asked him about Hillary Clinton, the Democratic frontrunner. Rubio answered by commenting on what she had said in Saturday night's debate and framed her as "very out of touch."

"I mean just the other night she [Clinton] said that we finally have a strategy that works against ISIS. She said that millions of Americans losing their healthcare coverage 'a glitch.' I mean, talk about out of touch, she is very out of touch," he said.

Rubio added that he hoped to make that point against Clinton clear next year. "We've got to get through the primary, but we are really looking forward to the general," he said.

Rubio's operation has been criticized recently for the limited retail politicking he's done until this point in the campaign. Other Republican candidates like Sen. Ted Cruz R-TX, Gov. Mike Huckabee and Gov. Chris Christie have made it a staple of their campaigns, often visiting a local Pizza Ranch in Iowa or diner in New Hampshire, sometimes unannounced, just to shake hands and meet voters.

Monday's event is an example of Rubio's shift as he shook hands, took pictures and answered questions from voters at George's Diner in Meredith, NH, for more than an hour. No formal remarks, no stage or flags -- just a presidential candidate talking to the people whom he hopes will elect him.

A diner at George's asked him about his early state strategy. Rubio feels confident about the general election but conceded that the primary race is still very competitive, and he feels that he still has time.

"I think people are really starting to tune in now -- especially once the holidays finish and everybody really focuses in -- especially like New Hampshire, Iowa...I think we've laid the groundwork" Rubio said.

Rubio continued, explaining to another voter how important retailing campaigning was in the early states in order for a campaign to gain momentum and continue on into the spring.

"The early states also begin to narrow the field...and then people can really start to focus in on some of the other places. Iowa and New Hampshire are one for the few places you can still campaign like this one on one the retail aspect of it."

Then, the retail phase largely ends, he noted, as the primary phase moves on to the bigger states and primary elections in multiple states on a single day.

The Rubio campaign declined to comment on whether this shift in campaign style is temporary or whether it's a sign of things to come, as the race for the Republican nomination enters its last month before voting begins.

For now, Rubio is looking to break out, like other winners have before him.

"If you look at the winners in the past, it's always been someone who surges in the last couple of weeks, so it tells you people are still weighing their options here" Rubio said.

This story has been updated to clarify the nature of Rubio's campaign stop on Monday.