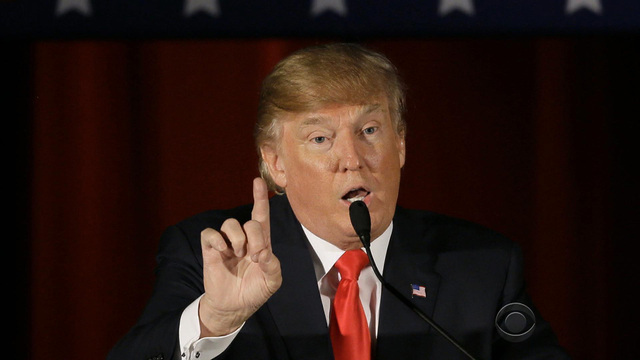 WASHINGTON -- Donald Trump, in an interview airing on Sunday morning on "Face the Nation," responded to his inadvertent starring role in a recent terrorist recruitment video.

Trump, who talked with "Face the Nation" host John Dickerson in Florida, reacted to al-Qaeda affiliate al-Shabab's use of a soundbite from the GOP front-runner's speech in December calling for the "total and complete shutdown" of Muslims entering the U.S.

After Dickerson played a portion of the al-Shabab video that showed Trump saying, "Donald J. Trump is calling for a total and complete shut down of Muslims entering the united states until our country's representative can figure out what the h*** is going on," he summarized the video's pitch to Muslims in the U.S.

"And then the video goes on and says the West will eventually turn against its Muslim citizens," Dickerson said. "It's saying to Muslims, 'You either join jihad or you leave the United States because of what Mr. Trump is proposing.'"

"Look, there's a problem," Trump responded. "I bring it up. Other people have called me and say, 'You have guts to bring it up because frankly, it's true but nobody wants to get involved. Now people are getting involved.

"People that are on different persuasions than me right now John are saying, you know maybe Trump isn't wrong. We want to examine it."

Dickerson then asked, "Does it concern you at all that you're being used in essentially a recruitment video by a terrorist organization?"

Trump's big strength is his bluntness, Dickerson says, but suggests that when you're commander-in-chief, bluntness can have consequences -- and this is an example of that.

But there's been no evidence so far that it's hurting Trump. Since his campaign began, pundits and analysts have said his big mouth would get him in trouble, but throughout, his supporters have stuck with him.

Trump also talked with Dickerson about the state of the campaign, the kinds of decisions he would make if he is elected president, and the role of women in the workplace.

A previous version of this story incorrectly identified the expletive used by Trump.