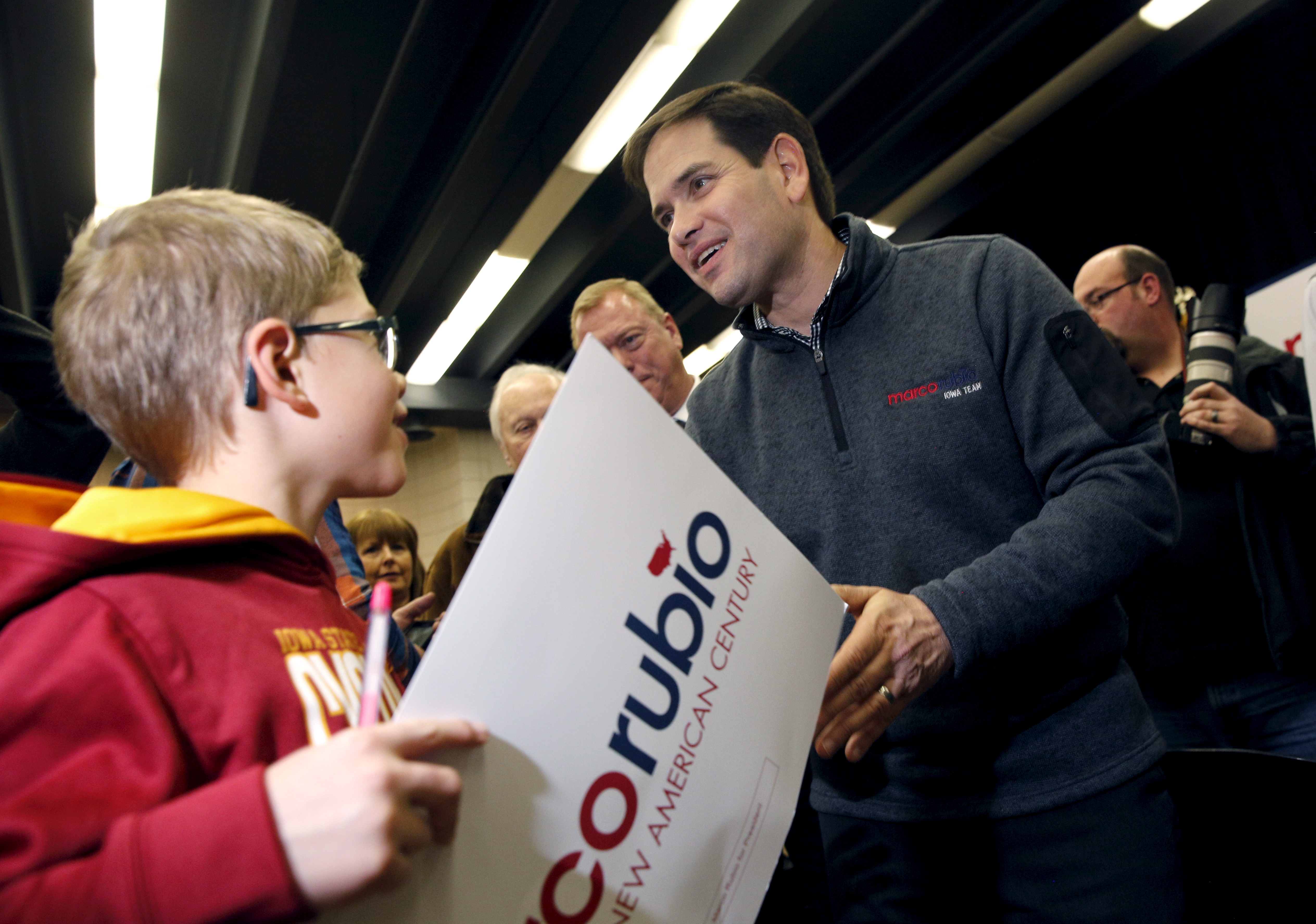 Sen. Marco Rubio, R-Florida, found himself in the crosshairs Tuesday, as both Chris Christie and the Jeb Bush-aligned super PAC, Right to Rise USA, took issue with his Senate attendance record and missed national security briefings.

Christie, at his own town hall event in eastern Iowa, not far from Rubio's, went after the freshman senator for his attendance record and specifically, for skipping the latest vote on the omnibus spending bill to fund the government.

Christie added, "He gives a good speech, Marco, and I want to hear his stirring speech that's going to try to persuade people on the floor of the Senate not to vote for this awful spending bill."

Speaking to reporters after his town hall in Clinton, IA, Rubio responded to Christie, pointing to his record as New Jersey governor and suggesting that Christie was "a little desperate" in his attacks, as voting day nears in the early states.

"You know, Chris has been missing in New Jersey for half the time, but candidates, I think as we get down the stretch here, some of them get a little desperate and a little nasty in their attacks" Rubio said, adding, "That's fine. We're going to continue to campaign on what I'm going to do when I'm president."

Right to Rise USA, the super PAC supporting Jeb Bush, released a television ad that will begin airing in Iowa this week. It criticizes Rubio for missing national security briefings after the terrorist attacks in Paris and San Bernardino, California -- and instead attending political fundraisers in California and New Orleans.

Like Christie, the 30-second ad also points out Rubio's missed votes in the Senate and ends with the tagline, "Politics first, that's the Rubio way." Here's the Right to Rise ad:

Rubio complained that the ad "isn't accurate" and went on to explain that his role on the Senate Intelligence Committee gives him access to the information "a whole day before the rest of the Senate," and he'd already been fully briefed on the material.

"I mean obviously we've seen that as we get closer to election day, and millions and millions of dollars of spending have not changed his fortunes, he's become increasingly negative in his attacks. This is not new," Rubio said. Then, reprising a line he used during a GOP debate last month, he added, "Someone's convinced him that attacking me is going to help him win."

One person who did not attack Rubio today was Rep. Trey Gowdy (R-SC), who traveled to Iowa for the first time with Rubio in order to endorse the Florida senator and explain to voters in Iowa why he chose Rubio over the rest of the GOP field.

"National security and public safety are the most important issues to me. And there is nobody better on those two issues than Marco Rubio" Gowdy acknowledged.

Rubio's stance on immigration has been target for opponents and an issue that has caused reluctance among voters. Gowdy, the chairman of the House Subcommittee on Immigration and Border Security, attempted to put those worries to rest, explaining that immigration was a national security issue and one that Rubio was well-equipped to handle as president.

"If I didn't think Marco Rubio was good on border security, interior security and employment security, I would have kept myself in South Carolina. I wouldn't be in Iowa right now." Gowdy added.

And Gowdy also joked about Rubio's bona fides as a fiscal conservative with a holiday anecdote.