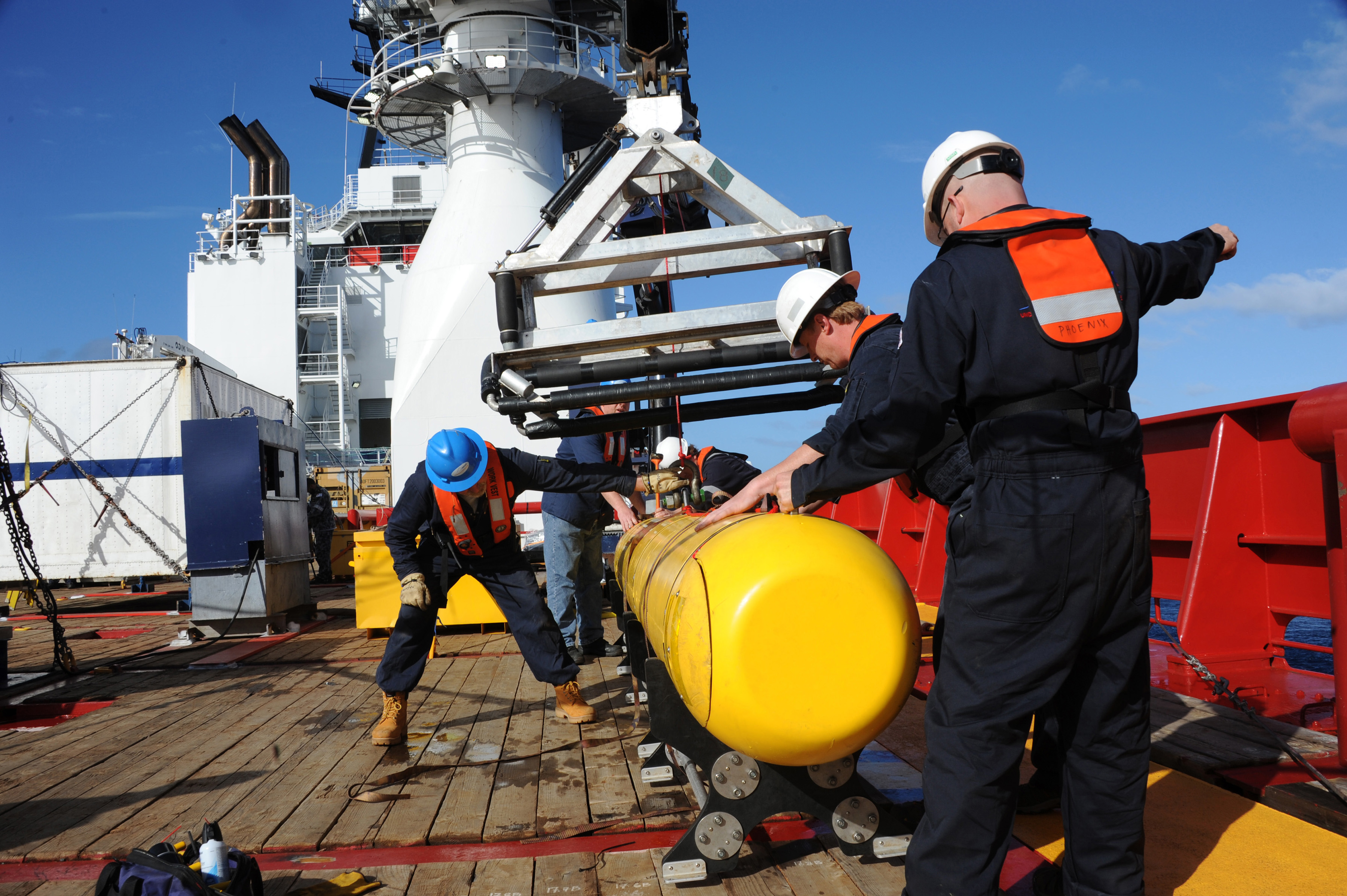 PERTH, Australia -- Search crews sent a robotic submarine deep into the Indian Ocean for the first time Monday to begin scouring the seabed for missing Malaysian Airlines Flight 370 after no signals from its black boxes were detected for six days.

Meanwhile, officials were investigating an oil slick about 5,500 meters (3.4 miles) from the area where the last underwater sounds were detected, said Angus Houston, the head of a joint agency coordinating the search off Australia's west coast.

Crews have collected an oil sample and are sending it back to Australia for analysis, a process that will take several days. Houston said it does not appear to be from any of the ships in the area, but cautioned against jumping to conclusions about its source.

The unmanned underwater vehicle, the Bluefin 21, was launched from the Australian navy ship Ocean Shield, the U.S. Navy said. The autonomous sub can create a three-dimensional sonar map of any debris on the ocean floor.

The move comes after crews picked up a series of underwater sounds over the past two weeks that were consistent with an aircraft's black boxes.

"We haven't had a single detection in six days, so I guess it's time to go under water," Houston said.

Prime Minister Tony Abbott raised hopes last week when he said authorities were "confident" the four underwater signals that have been detected are coming from the black boxes on Flight 370, which vanished March 8 during a flight from Kuala Lumpur, Malaysia, to Beijing.

But Houston warned that while the signals are a promising lead, the public needs to be realistic about the challenges facing search crews, who are contending with an extremely remote, deep patch of ocean.

"I would caution you against raising hopes that the deployment of the autonomous underwater vehicle will result in the detection of the aircraft wreckage - it may not," Houston said. "However, this is the best lead we have, and it must be pursued vigorously. Again, I emphasize that this will be a slow and painstaking process."

The plane's two black boxes, which contain flight data and cockpit voice recordings, have beacons that emit "pings" so they can be more easily found, but the beacons' batteries last only about a month, and it has been more than a month since the plane vanished.

The Australian navy ship Ocean Shield has been dragging a U.S. Navy device called a towed pinger locator through the water to listen for any sounds from the beacons. Over the past 10 days, the equipment has picked up four separate signals.

The Bluefin sub takes six times longer to cover the same area as the ping locator, and the two devices can't be used at the same time. Crews were hoping to detect additional signals before sending down the sub, so they could triangulate the source and zero in on where exactly the black boxes may be.

But it has been 38 days since the plane disappeared, and search crews haven't picked up any new sounds since Tuesday, suggesting that the devices' batteries may now be dead. That is why officials will now being using the Bluefin, Houston said.

The submarine will take 24 hours to complete each mission: two hours to dive to the bottom, 16 hours to search the seafloor, two hours to return to the surface, and four hours to download the data, Houston said. In its first deployment, it will search a 15-square-mile section of seafloor.

The black boxes could contain the key to unraveling the mystery of what happened to Flight 370 after it disappeared with 239 people on board. Investigators believe the plane went down in the southern Indian Ocean based on a flight path calculated from its contacts with a satellite and analysis of its speed and fuel capacity. But they still don't know why.

Meanwhile, officials were investigating an oil slick not far from the area where the underwater sounds were detected, Houston said. Crews have collected a sample of the oil and are sending it back to Australia for analysis, a process that will take several days.

The oil does not appear to be from any of the ships in the area, but Houston cautioned against jumping to any conclusions about its source.

A visual search for debris on the ocean surface was continuing on Monday over 18,400 square miles of ocean about 1,400 miles northwest of the west coast city of Perth. A total of 12 planes and 15 ships would join the two searches.

But Houston said that the visual search operation would be ending in the next two to three days. Officials haven't found a single piece of debris linked to the plane, and Houston said the chances that any would be have "greatly diminished."

"We've got no visual objects," he said. "The only thing we have left at this stage is the four transmissions and an oil slick in the same vicinity, so we will investigate those to their conclusion."

Complicating matters further is the depth of the ocean in the search area. The seafloor is about 15,000 feet below the surface, which is the deepest the Bluefin can dive. Officials are looking for other vehicles that could help to retrieve any wreckage, should the Bluefin find any.