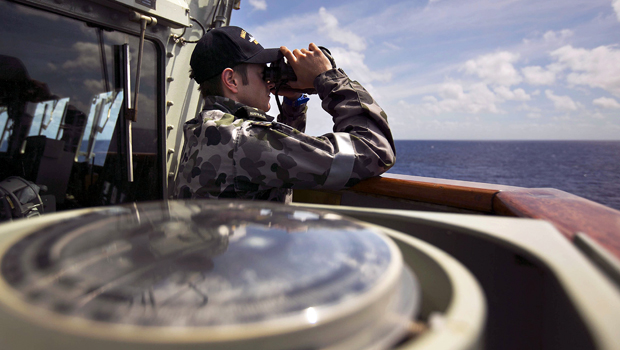 PERTH, Australia - After a week of optimism over four underwater signals believed to be coming from the missing Malaysian plane, the sea has gone quiet and Australia's leader is warning that the massive search will likely be long.

No new electronic pings have been heard since April 8, and the batteries powering the locator beacons on the jet's black box recorders may already be dead. They only last about a month, and that window has already passed. Once officials are confident no more sounds will be heard, a robotic submersible will be sent down to slowly scour for wreckage across a vast area in extremely deep water.

"No one should underestimate the difficulties of the task still ahead of us," Prime Minister Tony Abbott said in Beijing on Saturday, the last day of his China trip.

Abbott appeared to couch his comments from a day earlier, when he met with Chinese President Xi Jinping to brief him on the search for the Malaysia Airlines flight, which was carrying 239 people - most of them Chinese - when it disappeared March 8 en route from Kuala Lumpur, Malaysia to Beijing.

After analyzing satellite data, officials believe the plane flew off course for an unknown reason and went down in the southern Indian Ocean off Australia's west coast.

Abbott expressed confidence that the signals heard by an Australian ship, which is towing a U.S. Navy device that listens for flight recorder pings, were coming from the missing Boeing 777's black boxes. But he said the fading batteries were making the job much harder. Recovering the plane's flight data and cockpit voice recorders is essential for investigators to try to piece together what happened to Flight 370.

"There's still a lot more work to be done and I don't want anyone to think that we are certain of success, or that success, should it come, is going to happen in the next week or even month. There's a lot of difficulty and a lot of uncertainty left in this," he said.

In Malaysia, Defense Minister Hishammuddin Hussein on Saturday refuted a front-page report in a local newspaper, the New Strait Times, that a signal from the mobile phone of co-pilot Fariq Abdul Hamid was picked up by a telecommunications tower near the Malaysian city of Penang shortly before the plane disappeared from radar. The newspaper report said the signal ended abruptly before contact was established.

Hishammuddin, who is also the acting transport minister, told the Malaysian national news agency Bernama that he should have been aware of the phone call earlier, but that wasn't the case.

"I cannot comment (on the newspaper report) because if it is true, we would have known about it much earlier," Hishammuddin said after praying at a mosque in southern Jofor state, according to Bernama.

He added that it was irresponsible for anyone to take the opportunity to make "baseless" reports.

Four sounds heard April 5 and April 8 by the Australian ship Ocean Shield, which was towing the ping locator, were determined to be consistent with signals emitted from the two black boxes.

"Given that the signal from the black box is rapidly fading, what we are now doing is trying to get as many detections as we can so that we can narrow the search area down to as small an area as possible," Abbott said.

The underwater search zone is currently a 500-square-mile patch of the seabed, about the size of Los Angeles.

The searchers want to pinpoint the exact location of the source of the sounds - or as close as they can get - before sending the sub down. It will not be deployed until officials are confident that no other electronic signals are present.

The Bluefin 21 submersible takes six times longer to cover the same area as the ping locator, and will need about six weeks to two months to canvass the current underwater zone. The signals are also coming from 15,000 feet below the surface, which is the deepest the Bluefin can dive.

The surface area being searched on Sunday for floating debris was 22,203 square miles of ocean extending about 1,367 miles northwest of Perth. Up to 12 planes and 14 ships were participating in the hunt.