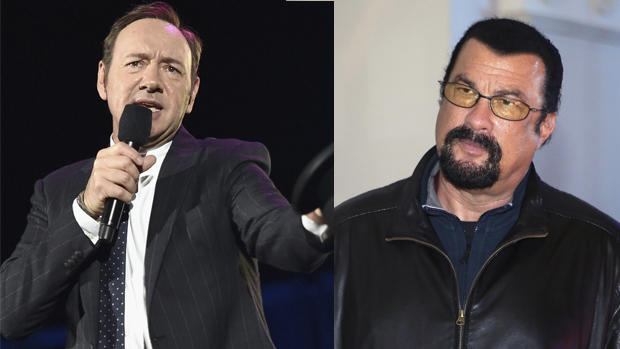 LOS ANGELES — Los Angeles prosecutors won't pursue sexual assault cases against Kevin Spacey and Steven Seagal. Both actors have been accused of sexual misconduct. Prosecutors cited the statute of limitations in dropping the cases, since the alleged incidents took place in the early 1990s.

The Los Angeles County District Attorney's Office made no comments Tuesday on the merits of the accusations.

The cases were reviewed by a task force established to evaluate sex abuse allegations in the entertainment industry in the wake of dozens of women accusing disgraced film mogul Harvey Weinstein and others of abuse.

Representatives for Spacey and Seagal did not immediately return emails seeking comment.

In March, a woman said she was a 17-year-old model and aspiring actress when Seagal sexually assaulted her at a supposed casting session at a Beverly Hills hotel room in 2002. Portia de Rossi and Jenny McCarthy have told similar stories.

Faviola Dadis said Seagal reached under her bikini top, grabbed her nipples and then grabbed her genitals soon after the audition began. She said she promptly ended the audition and left deeply shaken.

"I have suffered from depression, anxiety and post-traumatic stress, have found it difficult to form trusting relationships with men," Dadis said through tears as she read from a written statement. Regina Simons also said Seagal sexually assaulted her in 1995 when she was 18, allegations she previously made on NBC's "Megyn Kelly Today" in January.

The allegations against Spacey hit the headlines last October, when "Star Trek: Discovery" star Anthony Rapp told BuzzFeed that Spacey made a sexual advance on him in 1986, when he was just 14. At the time, Spacey was 26 years old. After Rapp came forward, more than a dozen other accusers spoke out against Spacey with allegations of sexual harassment or assault. Spacey was subsequently dropped from the movie "All the Money in the World" and his Netflix series, "House of Cards." Spacey responded to the accusations by chalking up his actions to "inappropriate drunken behavior" and struggling with being gay.

In July, it was revealed that British police were investigating six claims of sexual assault or assault by Spacey, three more than previously disclosed.