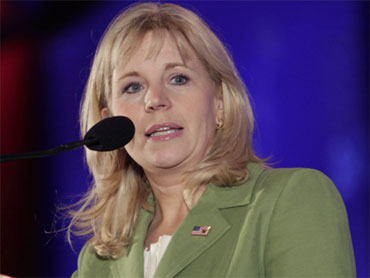 Cheney told the roughly 3,500 conservative activists and donors gathered for the conference that there are three prongs to the president's foreign policy: "apologize for America, abandon our allies and appease our enemies."

"The Obama administration is putting us on the path to decline," added Cheney, the daughter of former Vice President Dick Cheney.

She criticized the administration for the "shabby reception" given Israeli Prime Minister Benjamin Netanyahu when he visited Washington recently, which she deemed "disgraceful."

"President Obama is playing a reckless game if he continues down the path of diminishing the United States' ties to Israel," she said, deeming the world safer when there is "no daylight" between the two countries.

Cheney criticized the administration for expressing concerns about Afghan president Hamid Karzai, and not categorically casting the Afghan leader as an ally. The posture, she said, marked a "dangerous and juvenile display."

On Iran, she deemed the president's deadlines "meaningless" and his speeches "pointless." She said that Mr. Obama's response to the protests following that country's election suggested he was "much more concerned about whether the mullahs in Iran would be offended by his actions."

Threats of "watered down sanctions," she added, are just "buying time for the Iranians" to increase their capacity to attack.

She said Mr. Obama's recently-unveiled nuclear policy displayed his "naivete about his views about America's enemies," because it sent those enemies the message that America would not strike back when attacked.

"President Obama, stop apologizing for this great nation and start defending it," she said.

Cheney, who co-founded a group called Keep America Safe that has been harshly critical of the Obama administration's plan to close the Guantanamo Bay prison facility, stressed that that facility must remain open. She said the administration needed to be reminded that "foreign terrorists do not have Constitutional rights."

"This administration is confused about who the enemy is," said Cheney.

Cheney was repetedly interrupted with applause throughout her address, and at one point a man yelled out, "we want our country back!" Responded Cheney: "Amen to that."

"2010 is going to be a year of major challenge, and it's going to end with a major correction on Election Day," she said, referring to the midterm elections. She told her enthusiastic audience that "we deserve better policies and we deserve better leaders."

"There is nothing that convinces people of the rightness of conservative causes than seeing the alternative in action," she said.

Cheney also criticized the Obama administration for its health care push, stating that "President Obama's phony numbers are about to become our very real problem."

Passage of the health care bill, she added, was "one of the most arrogant power plays in American history."

Sarah Palin Fires Back at Obama, Mocks His "Experience" on Nuclear Issues
Jindal Jokes RNC Staffers Should Avoid Bourbon Street
Is This How Straw Polls are won?
"Evangelicals for Mitt" Step Into Romney Vacuum
Newt Gingrich: We Need a President, Not an Athlete
All Hotsheet Coverage of the SRLC