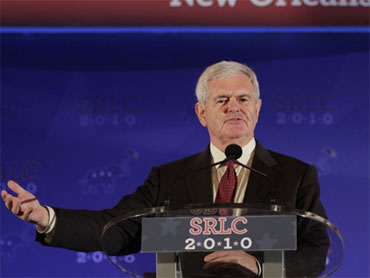 NEW ORLEANS -- Newt Gingrich made a rock star's entrance at the Southern Republican Leadership Conference Thursday night, entering to a standing ovation as the song "Eye of the Tiger" blared over the speakers and lights shined out over the crowd.

When Gingrich eventually got to the podium, he delivered a self-assured address peppered with historical allusions. Democrats in Washington, he said, had put together a "perfect unrepresentative left-wing machine dedicated to a secular socialist future."

Mr. Obama is "the most radical president in American history," Gingrich said. "He has said, 'I run a machine, I own Washington, and there is nothing you can do about it.'"

"What we need is a president, not an athlete," Gingrich said during a question and answer period after his speech. He added: "Shooting three point shots may be clever, but it doesn't put anybody to work."

Gingrich discussed passage of the health care bill, saying the "decisive" election of Sen. Scott Brown sent a message that Democrats decided to ignore in order to "ram through" the bill against the wishes of the American people.

"The longer Obama talks the less the American people believe him," Gingrich said, citing the decline in poll numbers for the health care bill as the president kept trying to sell it to the public.

Gingrich said that when Republicans take back the House and Senate in the midterm elections they should "refuse to fund" the administration's proposals, drawing huge applause from the crowd.

Add a Republican president, he said, and the goal should be to "repeal every radical bill" passed by the current administration.

Gingrich, a potential 2012 Republican presidential candidate, stressed his conception of the current administration as part of "secular, socialist machine."

"On every front," he said, "they're increasing government" and trying to "micromanage our lives," raise taxes, increase government power and strip citizens of their power.

"This is a fundamental fight over the core definition of America," Gingrich said. He told the crowd they should be talking about culture, not politics. "The more we make this a choice about the nature of America, the weaker they are," he said.

Gingrich told a story about the Polish people when they were resisting communism, who he said came up with the slogan, "two plus two equals four," taking it from the writings of Albert Camus and George Orwell. He said the slogan grew from the fact that the authorities can't handle the truth, tying it to what he suggested were nonsensical numbers offered by Democrats about the health care bill.

"There are more of us than there are of the government," the former House speaker said, midway through his story about Polish resistance to communism. "So why are we afraid of them?"

Asked if he would run for president, he said he would make a decision in February 2011. He said for the moment it was important for Republicans to "get out and campaign this year to win this year's election."

The left, Gingrich said, wants "to be dishonest about who we are" and cast Republicans as "the party of no."

He said the GOP needs to be the party of yes -- by saying yes to a balanced budget through controlled spending, more jobs through tax cuts, reforming government, stopping people from stealing from Medicaid and Medicare, spending more on getting soldiers better equipment, and "the right kind of health reform" and energy plan.

"My point is, there are many things that we can say yes to, and if we would discipline ourselves to start off every conversation with...'let me tell you what I'm for,'" Gingrich said, Republicans will be on the right track.

Gingrich predicted that "this administration is going to be a catastrophic failure," deeming it the worst since Herbert Hoover from an economic perspective. He pushed for small business tax cuts over government spending,

Gingrich said Americans will choose Republicans in the coming elections if Republicans can frame the discussion between what they offer and what is offered by Democrats. He said President Obama had helped set the stage for a comeback with his "incompetence."

The debate should be framed, he said, not as "Obama vs. Anti-Obama, but America vs. a secular socialist machine."

Sarah Palin Fires Back at Obama, Mocks His "Experience" on Nuclear Issues
Jindal Jokes RNC Staffers Should Avoid Bourbon Street
Is This How Straw Polls are won?
"Evangelicals for Mitt" Step Into Romney Vacuum
Liz Cheney: Obama Putting America on Path to Decline
All Hotsheet Coverage of the SRLC