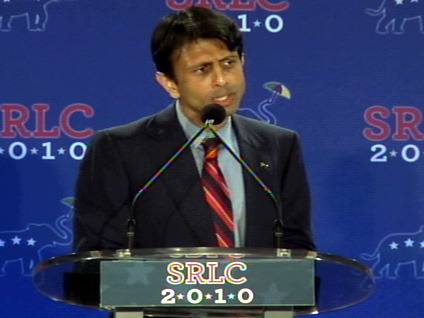 NEW ORLEANS -- Louisiana governor Bobby Jindal opened his address at the Southern Republican Leadership Conference with a joke about the Republican National Committee, quipping that staffers "may want to stay away from Bourbon Street."

Bourbon Street, of course, is the primary party street in the French Quarter, and it includes a number of strip clubs.

Jindal appeared to be referencing a recent RNC scandal in which nearly $2,000 was charged to the party for an outing to a bondage-themed topless club in West Hollywood.

The Louisiana governor stated at the outset of his comments that he is not running for president in 2012, freeing him up to be straightforward with the conservative activists gathered for the conference.

He said Republicans must stand by their opposition to the health care bill and work for repeal. "Let your yes be yes, let your no be no," he said, adding: "This is no time to be timid." Jindal stressed that he is supporting a lawsuit to repeal the bill.

He said "it is time to cut up Washington's credit cards" and stop a national debt he deemed "immoral."

Jindal said it is time to "cut government" instead of printing "money like they do in Washington DC" or raising taxes.

He suggested Democrats had been corrupted by their success in getting elected, stating, "we may not be able to take away their arrogance, but in November, we can take away their power."

The lawmaker added that this would come despite the fact that House Speaker Nancy Pelosi, who is from San Francisco, "might actually get votes for bankrupting America."

He drew applause for noting that federal dollars were not going to pay for elective abortions in Louisiana and celebrated the fact that for three straight years more people have moved into the state than have left.

Sarah Palin Fires Back at Obama, Mocks His "Experience" on Nuclear Issues
Is This How Straw Polls are won?
"Evangelicals for Mitt" Step Into Romney Vacuum
Newt Gingrich: We Need a President, Not an Athlete
Liz Cheney: Obama Putting America on Path to Decline
All Hotsheet Coverage of the SRLC