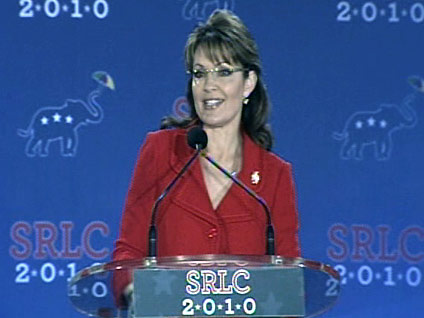 NEW ORLEANS - In a high profile address before thousands of conservative activists at the Southern Republican Leadership Conference Friday, Sarah Palin attacked the Obama administration for its energy policy, mocked the media and liberals for suggesting she is inciting violence and hit back at the president's criticism of her knowledge on nuclear issues.

Mr. Obama said in an interview Friday that he was unconcerned with Palin's attacks on his decision to announce that in most cases the United States will not use nuclear weapons against a non-nuclear country.

"Last I checked, Sarah Palin's not much of an expert on nuclear issues," he said.

Palin shot back in her comments Friday, mocking the president for "the vast nuclear experience that he acquired as a community organizer." She said that his alleged experience had not helped him make progress in the issue with Iran and North Korea.

Palin was greeted with overwhelming enthusiasm by the delegates here, who entered the hall to find Alaskan caribou jerky waiting on their seats. Hundreds of flashbulbs went off when Palin came onstage, and standing ovations and chants of "Sarah, Sarah, Sarah" broke out throughout her remarks.

Palin, a potential 2012 GOP presidential candidate, said the Obama doctrine involved "coddling enemies and alienating allies," attacking the administration for its handling of Israel, Iran and North Korea. She criticized the administration for its "yes we can spread the wealth around" attitude and said its programs, which she said took money from future generations, involved what "a lot of us" consider "stealing."

She suggested alternatives to the Obama administration's "Yes we can" slogan, among them "repeal and replace," in reference to the health care bill, and "don't retreat, reload," which prompted a standing ovation.

Palin said "don't retreat, reload," was "not a call for violence," despite what Democrats and members of the media have suggested. She said the media is "so desperate to discredit the people's movement, the tea party movement" that they make up such claims.

Later, after saying the word "shoot," she quipped, "I said shoot, I'm sorry," prompting laughter from the crowd.

Palin said that too many in Washington see money as free, referencing the stimulus package passed by the Obama administration. She quoted Bill Clinton's comment about then-candidate Obama during the presidential campaign, stating in a deep voice, "If this ain't the biggest fairy tale I've ever seen."

On energy policy, she said "the left has waged a multi-front war on conventional resources." Palin dismissed the president's decision to open up some offshore areas for drilling, saying, "they banned more offshore drilling than they allowed." She said the administration had purposely built a delay into opening the areas "to give environmentalists more time to sue."

She said the president had opened up drilling in certain areas to help win support for his energy policy, but that he is "not going to find bipartisanship down there."

Palin argued that the president is "trying to play both sides against the middle" and is pushing a policy that will "destroy jobs and impose a new national tax on energy on all of us."

The former Alaska governor, reading from prepared remarks, deemed the Environmental Protection Agency the "economic punishment agency" for claiming a role to regulate carbon emissions. She said the Obama administration's nuclear policy was " a lot of smoke and mirrors" because it was difficult to actually build a nuclear facility.

Palin also said global warming skeptics were "a little bit vindicated" by revelations that "there was some snake oil science" going on in climate change research, deeming the situation "Goregate."

She added that while activists may be down, there is nothing wrong "that a good old-fashioned election can't fix."

"Today the grand old party has its eyes wide open," Palin said. "We're getting back to our grand old roots."

Jindal Jokes RNC Staffers Should Avoid Bourbon Street
Is This How Straw Polls are won?
"Evangelicals for Mitt" Step Into Romney Vacuum
Newt Gingrich: We Need a President, Not an Athlete
Liz Cheney: Obama Putting America on Path to Decline
All Hotsheet Coverage of the SRLC