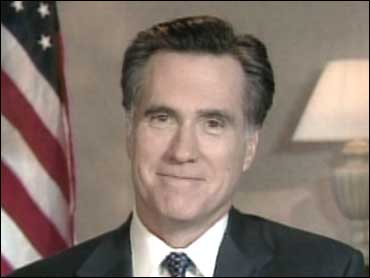 NEW ORLEANS - Mitt Romney is conspicuously absent from the Southern Republican Leadership Conference here, but he is not going unrepresented: As attendees streamed out of the main hall Thursday night following fiery speeches from Liz Cheney and Newt Gingrich, a ten-year-old boy sheepishly asked them if they would like a free pin proclaiming their support for the former Massachusetts governor.

The boy was with "Evangelicals for Mitt," a largely self-funded group formed back in 2006 that is hoping to keep Romney on the minds of conference-goers even as he continues his book tour elsewhere.

The group has a table set up selling and giving away Romney books, Romney t-shirts, Romney pins and stickers and pink Romney piggy banks ("a president who won't break the bank").

David French, co-founder of the group with his wife, is part of the Presbyterian Church of America; he says Romney's Mormonism is not a problem because Romney "shares our core values."

"We're electing a president, and not a pastor," said French. "His faith actually makes him a more appealing candidate to me." French added that "Mormons and evangelicals are fellow travelers in a lot of the cultural battles that are taking place around the country."

"Evangelicals for Mitt" placed an ad on the first page of the conference guidebook given to all attendees showing a piggy bank and the words "the economy is a moral issue." The ad encouraged evangelicals to "unite -- early -- behind the right candidate. He's pro-life, pro-traditional marriage, and the guy knows how to balance a checkbook."

French said he hopes Romney does well in the straw poll to be held at the conference on Saturday, the results of which are taken as a sign of the excitement of the party faithful about various candidates. A strong showing by Romney would be particularly impressive considering his absence.

"Everyone we give a button to we say, 'hey, think about voting for Mitt in the straw poll,'" he said.

Asked why Romney decided to skip the conference, French said he could only speculate, adding that he is not coordinating his efforts with the Romney team. But he suggested Romney may have made a regional calculation.

"You look at the Super Tuesday results in 2008, and this was not exactly his core territory -- the South," said French. "He won in the Midwest, he did well in the West, he did pretty well in the Northeast -- but the South was Governor Huckabee country. We're trying to be here and say, 'hey look, he is the guy for the South also.'"

"I think if he was the nominee the South would rally behind him, in a heartbeat," French added. "But to become the nominee -- I think the road to the nomination, in many ways, can't bypass the South."

UPDATE: After filing this piece I spoke to a young woman who said "Evangelicals for Mitt" paid for her entrance to the conference in exchange for her agreeing to back Romney in the straw poll. Read about it here.

Sarah Palin Fires Back at Obama, Mocks His "Experience" on Nuclear Issues
Jindal Jokes RNC Staffers Should Avoid Bourbon Street
Is This How Straw Polls are won?
"Evangelicals for Mitt" Step Into Romney Vacuum
Newt Gingrich: We Need a President, Not an Athlete
Liz Cheney: Obama Putting America on Path to Decline
All Hotsheet Coverage of the SRLC