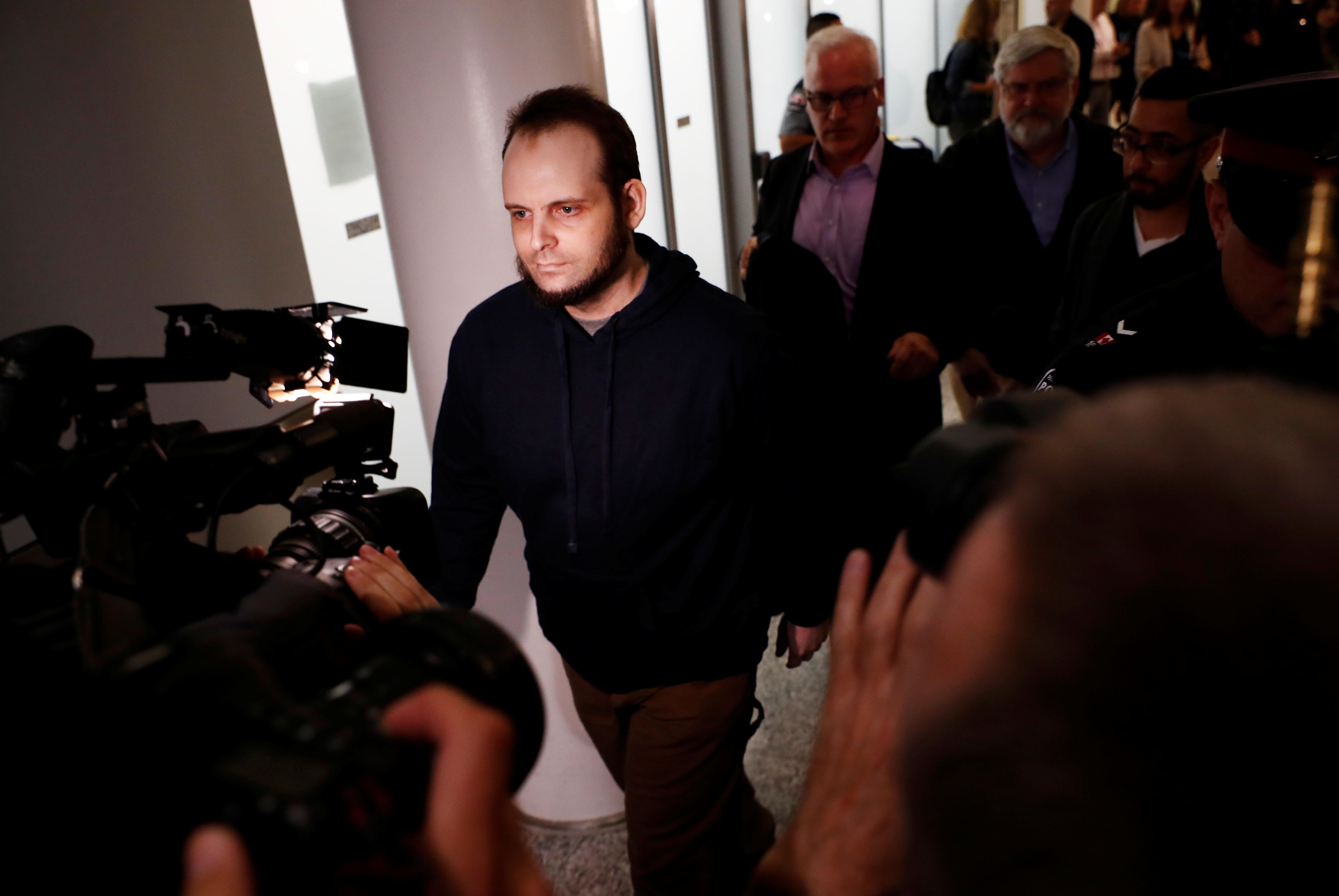 TORONTO -- Former hostage Joshua Boyle says the Haqqani network in Afghanistan killed his infant daughter and raped his American wife during the five years they were held in captivity.

Boyle gave the statement shortly after landing in Canada late Friday with his American wife, Caitlan Coleman, and three young children at the Toronto Pearson International Airport. He said there was a delay because of a medical emergency.

The couple were rescued Wednesday, five years after they were abducted by a Taliban-linked extremist network while in Afghanistan as part of a backpacking trip. Coleman was pregnant at the time and had four children in captivity. The birth of the fourth child had not been publicly known before Boyle appeared before journalists at the Toronto airport.

Boyle said his wife was raped by a guard who was assisted by his superiors. He asked for the Afghan government to bring them to justice.

"God willing, this litany of stupidity will be the epitaph of the Haqqani network," he said.

He said he was in Afghanistan to help villagers "who live deep inside Taliban-controlled Afghanistan where no NGO, no aid worker and no government has ever successfully been able to bring the necessary help."

Boyle also told the media that he plans on helping build a home for his children.

"Obviously it would be of incredible importance to my family that we are able to build a secure sanctuary for our three surviving children to call a home, to focus on edification ..." Boyle said, " ... and to try to regain the childhood that they had lost."

The government of Canada released a statement on the arrival of the family saying they were actively involved in the case at all levels.

"Today, we join the Boyle family in rejoicing over the long-awaited return to Canada of their loved ones," the statement read. "Canada has been actively engaged on Mr. Boyle's case at all levels, and we will continue to support him and his family now that they have returned. At this time, we ask that the privacy of Mr. Boyle's family be respected."

The final leg of the family's journey was an Air Canada flight Friday from London to Toronto.

On the plane from London, Boyle provided a written statement to The Associated Press saying his family has "unparalleled resilience and determination."

Coleman, who is from Stewartstown, Pennsylvania, sat in the aisle of the business class cabin wearing a tan-colored headscarf.

She nodded wordlessly when she confirmed her identity to a reporter on board the flight. In the two seats next to her were her two elder children. In the seat beyond that was Boyle, with their youngest child in his lap. U.S. State Department officials were on the plane with them.

He nodded to one of the State Department officials and said, "Their interests are not my interests."

He added that one of his children is in poor health and had to be force-fed by their Pakistani rescuers.

The family was able to leave from the plane with their escorts before the rest of the passengers. There was about a 5-to 10-minute delay before everyone else was allowed out.

Dan Boyle, Joshua's younger brother, said outside the family home in Smith Falls, Ontario, that he had spoken to his brother a few times in the past few days.

"He's doing very well. He sounds a lot like how he sounded five years ago. He sounds like he had his head on his shoulders and his wits about him," he said.

Pakistan's Foreign Ministry spokesman Nafees Zakaria said the Pakistani raid that led to the family's rescue was based on a tip from U.S. intelligence and shows that Pakistan will act against a "common enemy" when Washington shares information.

U.S. officials have long accused Pakistan of ignoring groups like the Haqqani network, which was holding the family.

A U.S. national security official, who was not authorized to discuss operational details of the release and spoke only on condition of anonymity, said the U.S. obtained actionable information, passed it to Pakistani government officials, asked them to interdict and recover the hostages -- and they did.

On Friday, President Trump, who previously warned Pakistan to stop harboring militants, praised Pakistan for its "cooperation on many fronts." On Twitter, he wrote that the U.S. is starting to develop "a much better relationship with Pakistan and its leaders."

The operation appeared to have unfolded quickly and ended with what some described as a dangerous raid, a shootout and a captor's final, terrifying threat to "kill the hostage." Boyle told his parents that he, his wife and their children were intercepted by Pakistani forces while being transported in the back or trunk of their captors' car and that some of his captors were killed. He suffered only a shrapnel wound, his family said.

A U.S. military official said that a military hostage team had flown to Pakistan Wednesday prepared to fly the family out. The team did a preliminary health assessment and had a transport plane ready to go, but sometime after daybreak Thursday, as the family members were walking to the plane, Boyle said he did not want to board, the official said.

Boyle's father said his son did not want to board the plane because it was headed to Bagram Air Base and the family wanted to return directly to North America. Another U.S. official said Boyle was nervous about being in "custody" given his family ties.

He was once married to Zaynab Khadr, the older sister of former Guantanamo Bay detainee Omar Khadr and the daughter of a senior al Qaeda financier. Her father, the late Ahmed Said Khadr, and the family stayed with Osama bin Laden briefly when Omar Khadr was a boy.

U.S. officials call the Haqqani group a terrorist organization and have targeted its leaders with drone strikes. But the group also operates like a criminal network. Unlike the Islamic State group, it does not typically execute Western hostages, preferring to ransom them for cash.

The Haqqani network had previously demanded the release of Anas Haqqani, a son of the founder of the group, in exchange for turning over the American-Canadian family. In one of the videos released by their captors, Boyle implored the Afghan government not to execute Taliban prisoners, or he and his wife would be killed.

U.S. officials have said that several other Americans are being held by militant groups in Afghanistan or Pakistan.

They include Kevin King, 60, a teacher at the American University of Afghanistan in Kabul who was abducted in August 2016, and Paul Overby, an author in his 70s who had traveled to the region several times but disappeared in eastern Afghanistan in mid-2014.