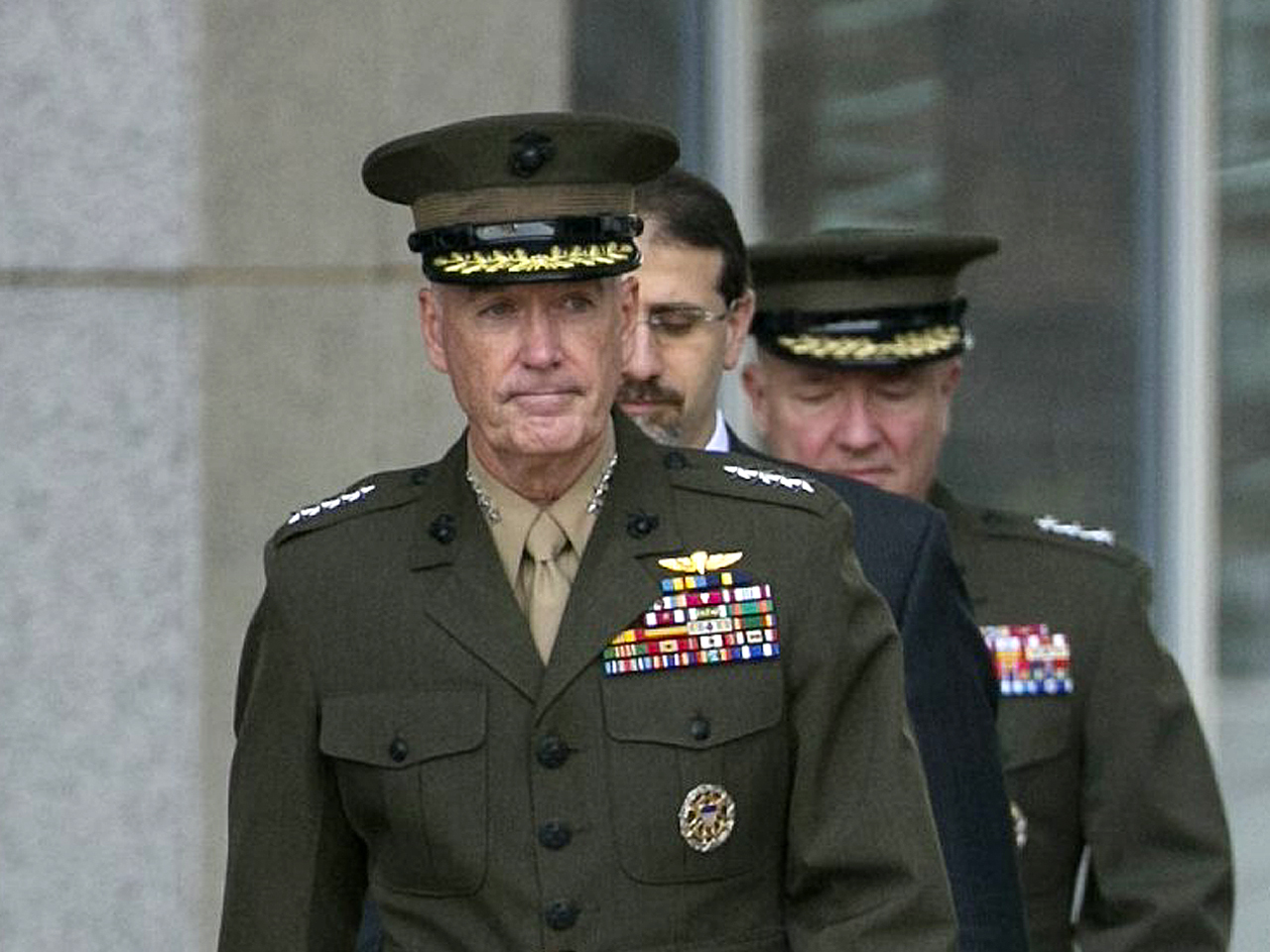 IRBIL, Iraq -- The top U.S. military officer landed in Iraq Tuesday to get an update on the battle against Islamic State of Iraq and Syria (ISIS) militants, saying he sees no prospect right now for Russia to expand its airstrike campaign into the war-torn country.

Marine Gen. Joseph Dunford, chairman of the Joint Chiefs of Staff, was making his first trip to the warzone since taking the top post on Oct. 1. He told reporters traveling with him that earlier reports that the Iraqi government wanted Russia to conduct airstrikes in Iraq are no longer in play.

He said U.S. officials spoke with Iraqi leaders and were told no Russian strikes have been requested.

Dunford said he wanted to talk with his commanders to get updates on battles in Beiji and Ramadi.

"Being in the job about two weeks, one of the things I want to do is go over here, get eyes on, on the ground," Dunford said as his C-17 headed into Irbil.

This is Dunford's first overseas trip since he took the chairman's job on Oct. 1, signaling the high priority he and the Pentagon leadership place on finding the right formula to use local forces backed by coalition airstrikes to defeat the ISIS extremists and retake territory the militants control in Iraq and Syria.

He is scheduled to meet later Tuesday with the head of Iraq's Kurdish regional government, President Massoud Barzani and other government leaders. Iraqi officials have broad concerns about any effort to provide equipment or weapons directly to the Kurds.

Dunford's stop in Iraq comes after three days of meetings with senior military and government leaders in Israel and Jordan, two key U.S. allies in the region. In both countries, Dunford heard officials' concerns about the ISIS threat and the roiling instability in the region.

Dunford is also likely to talk to Iraqis about the situation in Beiji. Late last week Iraqi troops backed by Shiite militia fighters drove ISIS militants out of the Beiji oil refinery, which has been contested for months.

On Tuesday, the Iraqi government said allied forces had also managed to push the militants out of the town of Beiji, about 155 miles north of Baghdad and strategically located on the road to Mosul, the country's second largest city.

The Joint Military Command spokesman, Brig. Gen. Yahya Rasool, told The Associated Press on Tuesday that army troops and paramilitary forces, made up mainly of Shiite militias, retook the town of Beiji. State-run TV aired footage of what it said was a residential area in Beiji. Soldiers could be seen waving Iraqi flags from rooftops as thick black smoke billowed into the air.

Mosul and Ramadi, the capitol of Iraq's western province of Anbar, are both under ISIS control, and efforts to retake them have been problem-plagued.

Earlier this month, however, U.S. officials said Iraqi ground forces have advanced to the outer suburbs of Ramadi and that conditions may be right to launch an assault to take back the city.

Dunford's visit comes just a few months after Defense Secretary Ash Carter made a trip to Irbil, also meeting with Kurdish leaders. And at the time Carter told U.S. and coalition forces that the Kurdish troops, known as the Peshmerga, are "the model of what we are trying to achieve" -- capable and motivated local forces who can battle ISIS.

The U.S. has been training and equipping the Kurdish forces, through the auspices of the Iraqi government. And the Kurds have proven to be better able to combat ISIS than the Iraqi Army.

So far, the U.S. has not provided arms directly to the Kurds, insisting instead that it work through the country's central government in Baghdad in order to avoid fomenting more division.

ISIS extremists swept across northern Iraq last year, taking over large sections of the country. Much of the Iraqi Army collapsed, with troops fleeing or joining the militants.

Dunford's flight into Iraq was suddenly delayed Tuesday morning when Iraqis on the ground in Irbil refused to allow his C-17 aircraft to land because it's a cargo plane.

Just before 9:30 a.m., local time, as Dunford's plane approached Irbil, the crew was directed to fly instead to Baghdad.

The change set off a flurry of activity on the plane, as military staff quickly yanked phones and cords out of containers to make urgent phone calls to officials on the ground, as the C-17 flew toward Baghdad. After about a half-hour, the aircraft got permission to land in Irbil.

It was unclear what triggered the mix-up, but officials said the plane's flight had been pre-approved by Iraqi leaders.