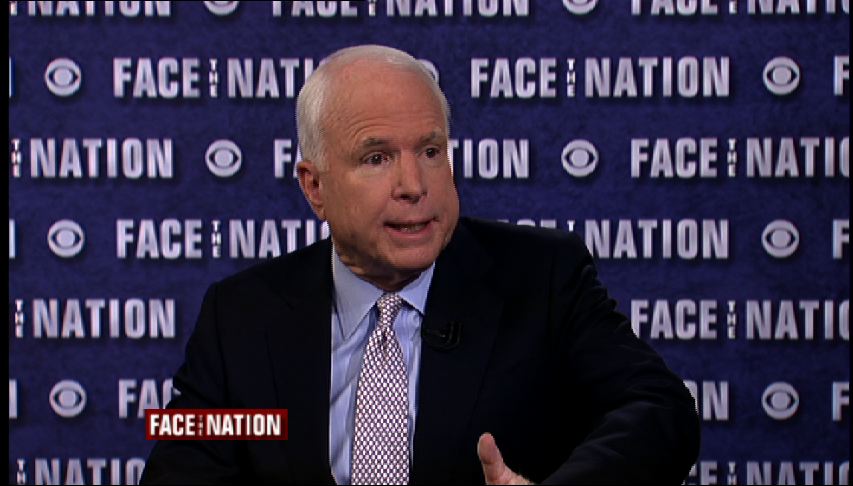 With rising tension in the eastern part of Ukraine, Sen. John McCain, R-Ariz., said it is imperative that the U.S. act more forcefully to prevent further Russian encroachment on the region by providing more arms to the Ukrainians and imposing further sanctions on the Russian economy.

On Sunday, Ukrainian special forces exchanged gunfire with a pro-Russia militia in the first reported gun battle in the city of Slovyansk, yet another sign of the increasing unrest that has spread to several municipalities in eastern Ukraine. There is a large ethnic Russian population in that part of the country, and some protesters are calling for a referendum on autonomy.

McCain said the rising unrest is the result of U.S. failure to "enact anything really meaningful and important as a result of [Russian President] Vladimir Putin's incursion and annexation under Crimea, which was predictable. And what he's doing now is predictable."

The Arizona senator, who been in close contact with members of the provisional Ukrainian government, said they feel abandoned by the U.S. - and rightfully so.

"We ought to at least, for God's sake, give them some light weapons with which to defend themselves. So far, this administration's not only not done that, but they won't even share some intelligence with the Ukrainian government," McCain said on "Face the Nation" Sunday.

In addition to providing weapons for the Ukrainians, McCain said the U.S. and Europe need to impose very severe sanctions on Russia even if it means some financial pain in the short term.

"Severe penalties of sanctions can have an effect on their economy," McCain said. "It's a gas station masquerading as a country."

He said Putin is weighing the costs and benefits of further incursion into Ukraine, and that any unrest he is able to foment in the country only disrupts the provisional government's ability to make changes and reforms, stabilize the economy, and hold elections.

Some of McCain's harshest criticism was reserved for President Obama and Secretary of State John Kerry, who have talked about looking for "off-ramps" from the conflict and urged Putin to deescalate.