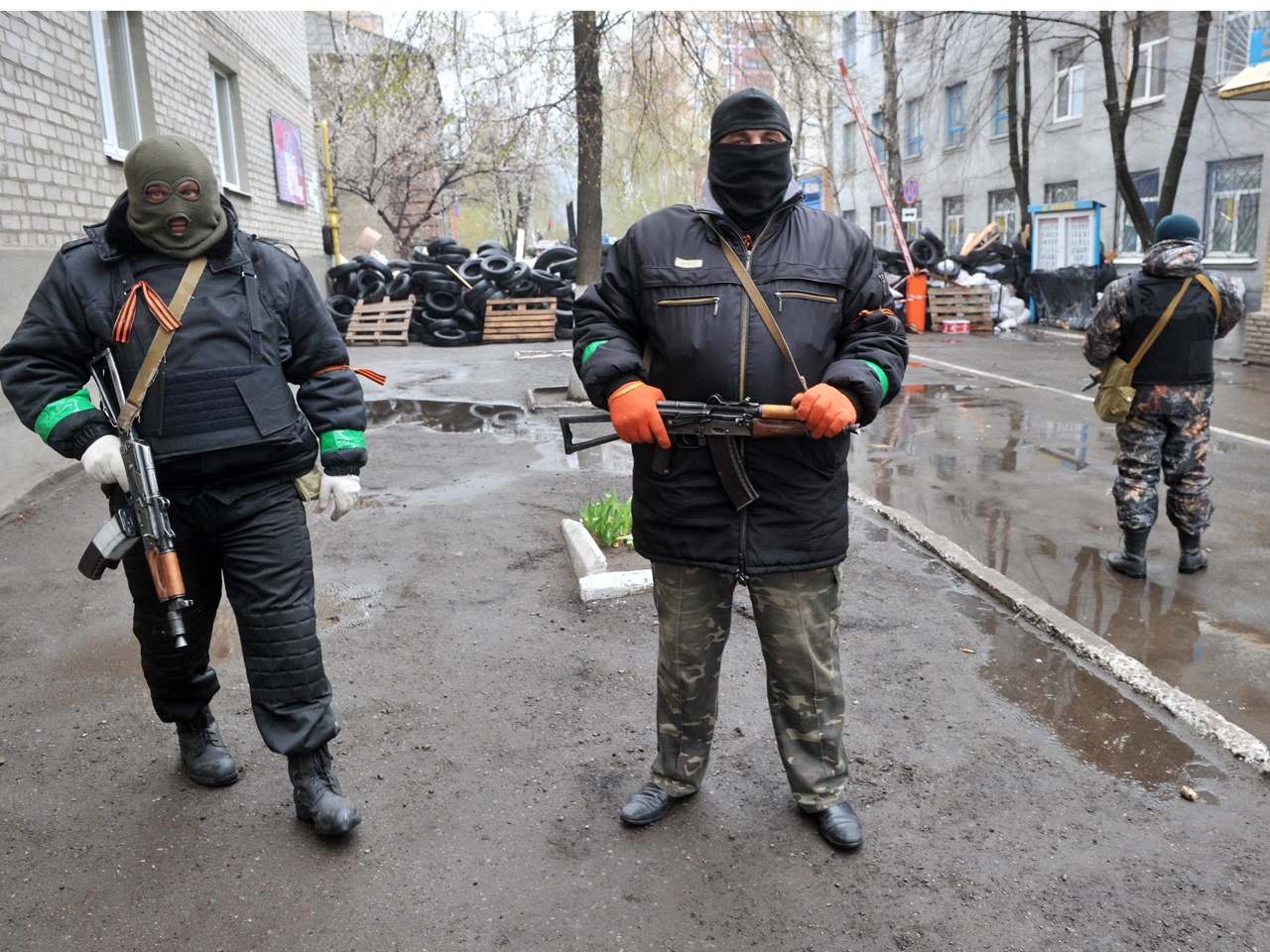 SLOVYANSK, Ukraine - Ukrainian special forces exchanged gunfire with a pro-Russia militia in an eastern city Sunday, according to the interior minister, who said one Ukrainian security officer was killed and five others were wounded. It was the first reported gunbattle in the east amid the ongoing crisis in Ukraine, where armed pro-Russia men have seized a number of law enforcement buildings in recent days.

An Associated Press reporter on the ground didn't see any sign of violence when he arrived Sunday.

Unrest has spread to several municipalities in eastern Ukraine, including the major industrial city of Donetsk, which has a large Russian-speaking population.

Katie Stallard of CBS News' British partner SKY News reports from Donetsk that some militants there are demanding a referendum on federalization, which would essentially make it an autonomous region. Other militants are demanding full annexation by Russia. There are real fears of a Russian takeover.

Donetsk was also the support base for Viktor Yanukovych, the Ukrainian president ousted in February following months of protests in Kiev, the capital, that were ignited by his decision to back away from closer relations with the European Union and turn toward Russia. Ethnic Russians in Ukraine's east widely fear that the new pro-Western Ukrainian government will suppress them.

The regional administration in Donetsk issued a statement, confirming one dead but said there were altogether nine wounded people. They wouldn't say who the wounded people were, but said the man who died was killed in gunfire outside Slovyansk.

Avakov has described the unrest as "Russian aggression."

In an earlier post, he said the men who seized the buildings in Slovyansk had opened fire on Ukrainian special forces sent to the city Sunday. He called on residents to remain calm and stay at home.

An Associated Press reporter saw no signs of any shots fired at the police station, which was surrounded by a reinforced line of barricades. Unlike on Saturday, the men patrolling the barricades were largely unarmed. One of the guards who asked not to be identified denied reports of fighting at the police station.

Armed camouflaged men were guarding a checkpoint at the main entrance into the city.

Ukrainian lawmaker Oleh Lyashko said Sunday afternoon that Ukrainian forces managed to take control of the city hall, the security service's branch and the police station in Slovyansk. This could not be immediately verified.

In a phone call with Russian Foreign Minister Sergey Lavrov, U.S. Secretary of State John Kerry "expressed strong concern" that the attacks "were orchestrated and synchronized, similar to previous attacks in eastern Ukraine and Crimea," according the State Department. Kerry "made clear that if Russia didn't take steps to de-escalate in eastern Ukraine and move its troops back from Ukraine's border, there would be additional consequences," the department said.

The Russian Foreign Ministry debunked Kerry's claims, while Lavrov blamed the crisis in Ukraine on the failure of the Ukrainian government "to take into account the legitimate needs and interests of the Russian and Russian-speaking population," the ministry said. Lavrov also warned that Russia may pull out of next week's Ukraine summit if Kiev uses force against "residents of the southeast who were driven to despair."

CBS News correspondent David Martin reports new satellite photos show Russian troops are digging in along the border with Ukraine -- not pulling back. They have added to concerns that Russia may be preparing to invade eastern Ukraine.

Photos taken by a commercial satellite show Russian jets parked wingtip to wingtip; helicopters -- some of them gunships -- spread across a field; a grid full of tanks and infantry fighting vehicles; another full of artillery pieces.

The equipment is arrayed in an arc encompassing Ukraine's eastern border and is judged by U.S. intelligence to be ready to move within 12 hours.

Also within the past few days, the Russians have started making infrastructure improvements -- such as laying gravel on dirt roads -- that suggest they have no intention of pulling back anytime soon. One Russian unit even laid out a soccer field to keep the troops entertained.

NATO Secretary General Anders Fogh Rasmussen on Sunday said he is concerned by the rising tensions in eastern Ukraine which he described as "a concerted campaign of violence by pro-Russian separatists, aiming to destabilize Ukraine as a sovereign state." Fogh Rasmussen likened the developments in the east to what happened in Crimea last month when men in unmarked uniforms occupied the region.

"Any further Russian military interference, under any pretext, will only deepen Russia's international isolation," he said.

Swedish Foreign Minister Carl Bildt, who is in Ukraine this weekend, condemned the unrest in a Twitter post as "a coordinated armed action to seize control over key parts of Eastern Ukraine," which "would not have happened without Russia."

Overnight, the interior minister reported an attack on a police station in the nearby city of Kramatorsk. A video from local news website Kramatorsk.info showed a group of camouflaged men armed with automatic weapons storming the building. The news website also reported that supporters of the separatist Donetsk People's Republic have occupied the administration building, built a barricade with tires around it and put a Russian flag nearby.

Regional news website OstroV said three key administrative buildings have been seized in another city in the area, Enakiyeve while in Mariupol, a city south of Slovyansk and just 30 miles away from the Russian border, the city hall was seized by armed masked men. Local news website 0629.com.ua said 1,000 protesters were building a barricade around it while unknown armed men raised the Russian flag over the building.

On Saturday in Donetsk, the regional capital, witnesses said the men who entered the police building were wearing the uniforms of the Berkut, the feared riot police squad that was disbanded in February after Yanukovych's ouster. Berkut officers' violent dispersal of a demonstration in Kiev in November set off the mass protests that culminated in bloodshed in February when more than 100 people died in sniper fire. The acting government says the snipers were police.