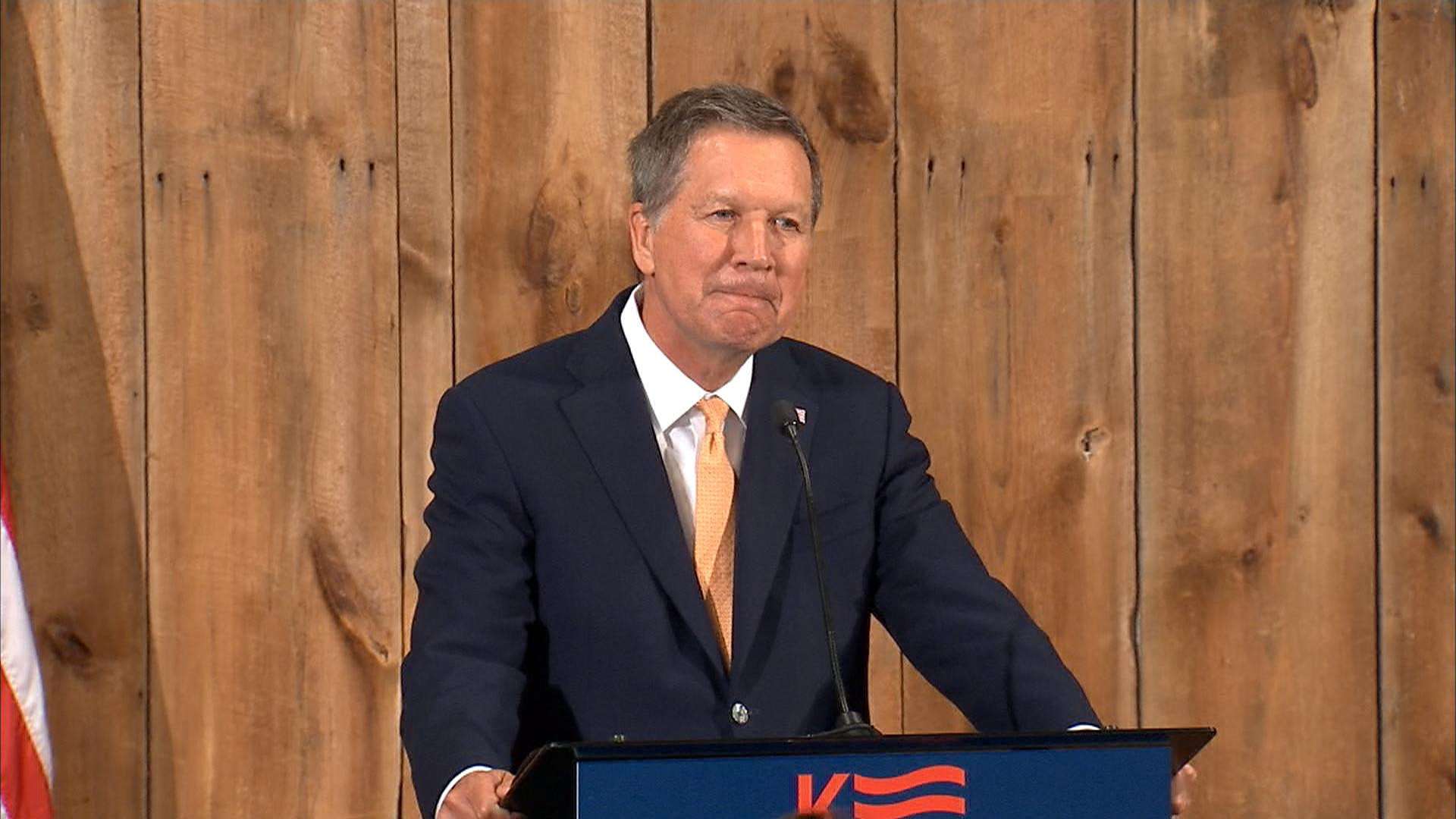 John Kasich ended his presidential bid on Wednesday evening, a day after the only other GOP candidate opposing Donald Trump, Ted Cruz, dropped out of the race after Trump's resounding victory in Indiana.

"As I suspend my campaign today, I have renewed faith, deeper faith, that the Lord will show me the way forward and fulfill the purpose of my life," the Ohio governor said in a brief press conference from Columbus, Ohio.

Kasich recounted all of the times throughout his campaign when struggling Americans approached him and all of the hugs he gave.

"I think it's frankly because, for whatever reason, that God gave me the grace to make people feel safe and comfortable," he said. "I've learned something folks, everyone here. We all need to slow down our lives and listen to those who are around us."

He also said, "Nobody has ever done more with less in the history of politics."

Kasich had cancelled a press event in Virginia Wednesday, fueling speculation about an exit from the race. He finished third in Indiana, behind Cruz. On Tuesday, Trump won at least 51 of the state's 57 delegates. He had already ceded Indiana, having forged an agreement with Ted Cruz in which he leave Indiana to Cruz and focus his own efforts on winning Oregon and New Mexico.

Republican National Committee Chairman Reince Priebus referred to Trump as the "presumptive nominee" in a tweet Tuesday night, calling for other Republicans to rally behind the billionaire.

Kasich senior strategist John Weaver took issue with that assessment, saying in a statement Tuesday night that "there is no presumptive nominee" until a candidate reaches the 1,237 delegates needed to lock down the nomination. Trump, after Indiana, has 1,046 delegates, while Kasich has just 152 delegates.

Previously, Kasich, the last man standing against Trump, had pledged that he would continue his campaign "as long as it remains possible." He has argued over the past few weeks that he would fare better in a general election match-up against Hillary Clinton than either Cruz or Trump, based on several national polls, and that putting Cruz or Trump at the top of the GOP ticket could threaten Republican control of the Senate, as well.

Kasich's hopes for winning, however, were predicated on the notion that Trump would fail to secure the 1,237 delegates necessary to win it outright. Kasich was banking on winning over delegates at a contested convention in Cleveland this summer.

The sitting Ohio governor has consistently said he'd run a positive race, and to that end, he has spent little time criticizing his opponents, choosing instead to highlight his economic record in Ohio -- emphasizing job creation and programs to help lift up the state's poorest residents, like the expansion of Medicaid under Obamacare. He also frequently pointed to his work on balancing the federal budget when he was in Congress.He is a second-term governor, popular in Ohio among both Republicans and Democrats.

As Donald Trump begins giving some thought to his vice president, it remains to be seen whether Kasich will be on the short list. In a recent appearance on "CBS This Morning," he rejected the possibility outright, saying there was "zero chance" he'd be Trump's running mate.