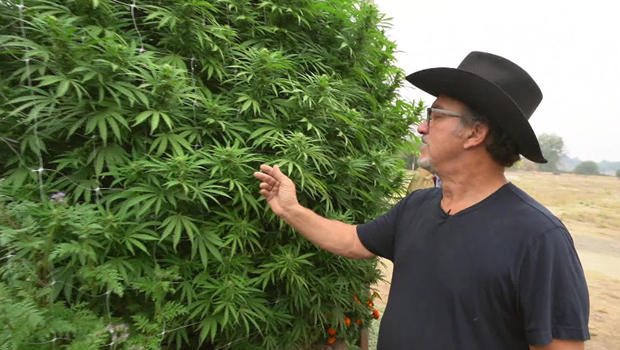 This year has been, yet again, historically grim when it comes to wildfires burning in the western U.S. In Oregon alone, at least 10 people lost their lives, tens of thousands were evacuated, and over a million acres burned.

Of the many people affected, there was one you might not have expected: actor Jim Belushi. "The devastation, it's just changed the community," he told correspondent Luke Burbank as they surveyed the damage. "It's just a graveyard here."

Belushi lives along the Rogue River in Eagle Point, Oregon. "The fires were way up there by that hill. And so we used this hose to hose the house down, hose the grass, and hose the field down and keep a little water break."

It's a place he first visited some ten years ago on a family vacation: "One day I went into the river, skinny-dipping. And it was like a baptism. That was the start."

So, he bought an old Elk's Lodge picnic grounds, built a house, built a sweat lodge ("Oh yeah. I am, like, a little shaman, you know?"), and eventually bought the neighboring farm, which is when things got a little trippy.

That's right: Belushi started a cannabis farm, all of which is being documented on a new reality show, "Growing Belushi," on Discovery Go.

"I am SO obsessed," Belushi said. "It's like talking to you right now, my eyes are watching for squirrels and gophers. These pests eat the plants. Aphids, Rusick mites. You are doing battle with Mother Nature."

Belushi is involved every step of the way, from the greenhouse ("The air has to constantly be circulating"), to the drying room, to the finished product. And he dotes on the ladybugs that eat aphids. "I love them! I personify them. I give them names. I play music for them. And I believe if you love them, they will move on to the world and love others, and help them."

If you're wondering where this Hollywood actor got his work ethic, it was from washing dishes at his father's restaurant in Chicago. The Belushis lived in Wheaton, Illinois, where they were some of the only Albanian immigrants. "I wouldn't let my friends come in the house," he recalled, "because you'd open up the door and you can smell liver and onions cooking and I'm like, 'Uhhh, you know, just wait outside. I'll be right out.'"

Jimmy, as he was known then, grew up in the very large shadow of his older brother, John Belushi" "John looked like Dustin Hoffman in 'The Graduate' in a senior picture, you know? Honor Society, prom king. He had it all going for him. He left no room for me. So, I was the star criminal, the star troublemaker. I was on probation from the ages of 13 to 18."

Jim was inspired to try acting after watching his brother perform at Second City and "Saturday Night Live. " As Jim Belushi was working his way up the comedy ladder, John Belushi had become arguably one of the biggest stars in the world.

Then, in March of 1982, John died in Los Angeles. He was just 33. "Part of it was not just losing the sibling, part of it was losing a sibling to drug overdose," said Jim. "It just breaks the family up. It's like throwing a hand grenade in the family."

Burbank said, "Danny Aykroyd, I think, famously said that if your brother had been a pothead, he might still be alive?"

"Well, that made me think for a long time, and that actually set me on this journey," Jim said.

In the nearly four decades since John Belushi's passing, it's actually been Jim Belushi who's become a huge star. But hanging out on the farm with him, you can't help but think that it might be this role, of cannabis farmer, that's the one he was born to play — and one that let him help put the past in the past.

He told Burbank, "The beautiful, thing about farming is that you're in the ground. under the sun. And it's just, it roots you. It literally grounds you."

To Belushi, these cannabis plants have become almost like family — family that came within three miles of burning to the ground. So, when he got an opportunity last week to thank the first responders who helped fight those fires to a free steak lunch, he jumped at the chance, in the most Belushi way possible — by literally jumping on a table.

He told those assembled, "I wanna thank all you men and women for not only putting yourself on the line, but being on the line to save and help this community. And we're going to continue and help rebuild, so thank you so much! You like the meat?"