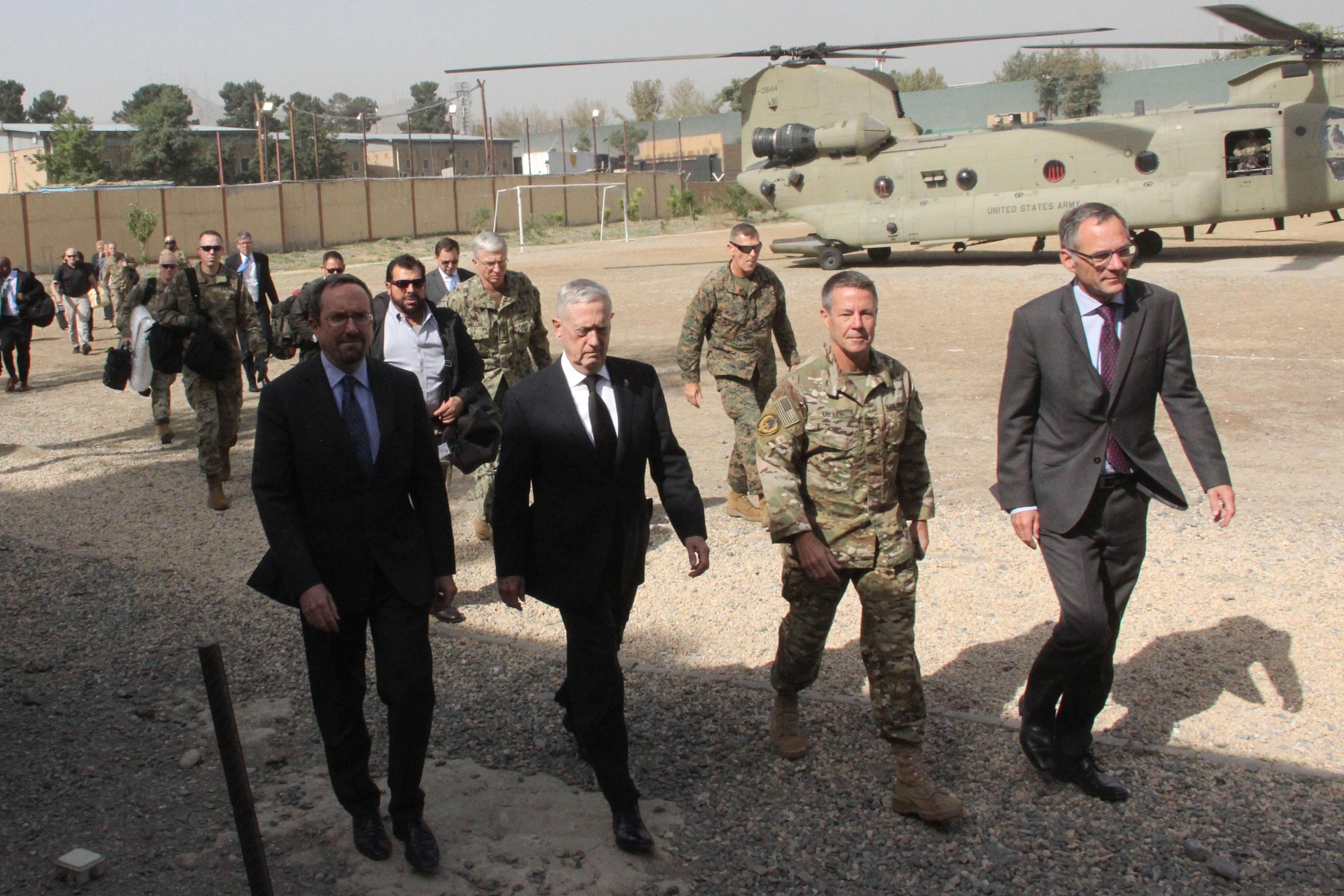 KABUL, Afghanistan -- U.S. Defense Secretary James Mattis arrived on a surprise visit to Afghanistan's war-shattered capital on Friday, the U.S. command in Afghanistan said, just days after a suicide bomber killed 21 people in the city and wounded 90 others.

As helicopters patrolled the skies over Kabul, Mattis arrived accompanied by Gen. Joseph Dunford, chairman of the joint chiefs of staff. He was expected to meet President Ashraf Ghani, presidential spokesman Mohammad Haroon Chakhansuri told The Associated Press. He was also expected to meet Afghan, U.S. and NATO military commanders.

Mattis' arrival comes amid brutal assaults against the country's minority Shiites and a fresh round of insider attacks this week that have claimed the life of one American service member and eight local police.

While in Kabul, Mattis is expected to discuss the escalating violence against both civilians and military personnel.

The U.S. has been supporting Afghan forces in an aggressive campaign against ISIS militants in eastern Nangarhar province, but the terror group has repeatedly been able to carry out horrific and brazen attacks in the heavily fortified capital of Kabul.

The victims have most often been Afghanistan's minority Shiite Muslims. The radical Sunni ISIS reviles Shiites as apostates.

CBS News correspondent Charlie D'Agata reports that the violence in Afghanistan has been relentless in recent days -- with four attacks in just 24 hours leaving at least 40 people dead. He says there are endless checkpoints in the capital Kabul, and blast walls have turned parts of the city into a fortress.

The situation in Kabul has deteriorated over the past couple years, the threats are everywhere. There are insider attacks against Afghan and U.S. forces, says D'Agata, and despite all the checkpoints, nobody seems capable of stopping the Taliban or ISIS from striking the capital.

It's been 17 years of war. An estimated $1 trillion later, real security remains out of reach.

On Friday, Afghanistan's Islamic State of Iraq and Syria (ISIS) affiliate issued a statement claiming responsibility for the attack on the wrestling center. The statement was accompanied by a picture of a young man with a masked face, who was identified as suicide bomber Saber al-Khorasani.

The second explosion was a vehicle filled with explosives, according to the statement, which could not be independently verified. The discrepancy between the ISIS account and the Afghan government's initial report of two suicide bombers was not immediately clear.

The Afghan affiliate is known as ISIS in Khorasan province, the ancient name of an area that once included parts of modern-day Iran, Afghanistan and Central Asia.

Mattis' visit to Kabul comes as Washington seems to be ramping up efforts for a negotiated end to Afghanistan's protracted war and Washington's longest military engagement.

U.S. Secretary of State Mike Pompeo announced this week the appointment of Zalmay Khalilzad as Washington's new point man for Afghan reconciliation. Khalilzad, a controversial figure in the region, is a former envoy to Afghanistan.

Mattis arrives in Afghanistan fresh off earlier meetings in Pakistan where Pompeo said the U.S. wanted to "reset" its raucous relationship with Pakistan and newly elected Prime Minister Imran Khan expressed optimism, promising to work with Washington for peace. But Khan has repeatedly said Pakistan is no longer interested in partnering with the United States in war.

"This is my promise - that Pakistan will never again fight someone else's war," Khan said on Thursday in a speech to mark Pakistan's Defense Day. As an opposition leader Khan was a sharp critic of Pakistan's participation in the U.S.-led war on terror.

Still, Pakistan is seen as key to any negotiated end to the Afghan war because of its close relationship with the Taliban. Both Washington and Kabul have been harsh critics of Pakistan for allowing safe havens for Taliban fighters on its territory, a charge Islamabad has denied.

Khalilzad's appointment was also unwelcome news in Pakistan because of his outspoken attacks on its military and powerful ISI intelligence agency, even suggesting Washington should declare Pakistan a state sponsor of terrorism.

Washington last weekend announced it canceled a $300 million Coalition Support Fund payment to Pakistan, which is a payment for costs incurred by Pakistan's military in the war on terror.