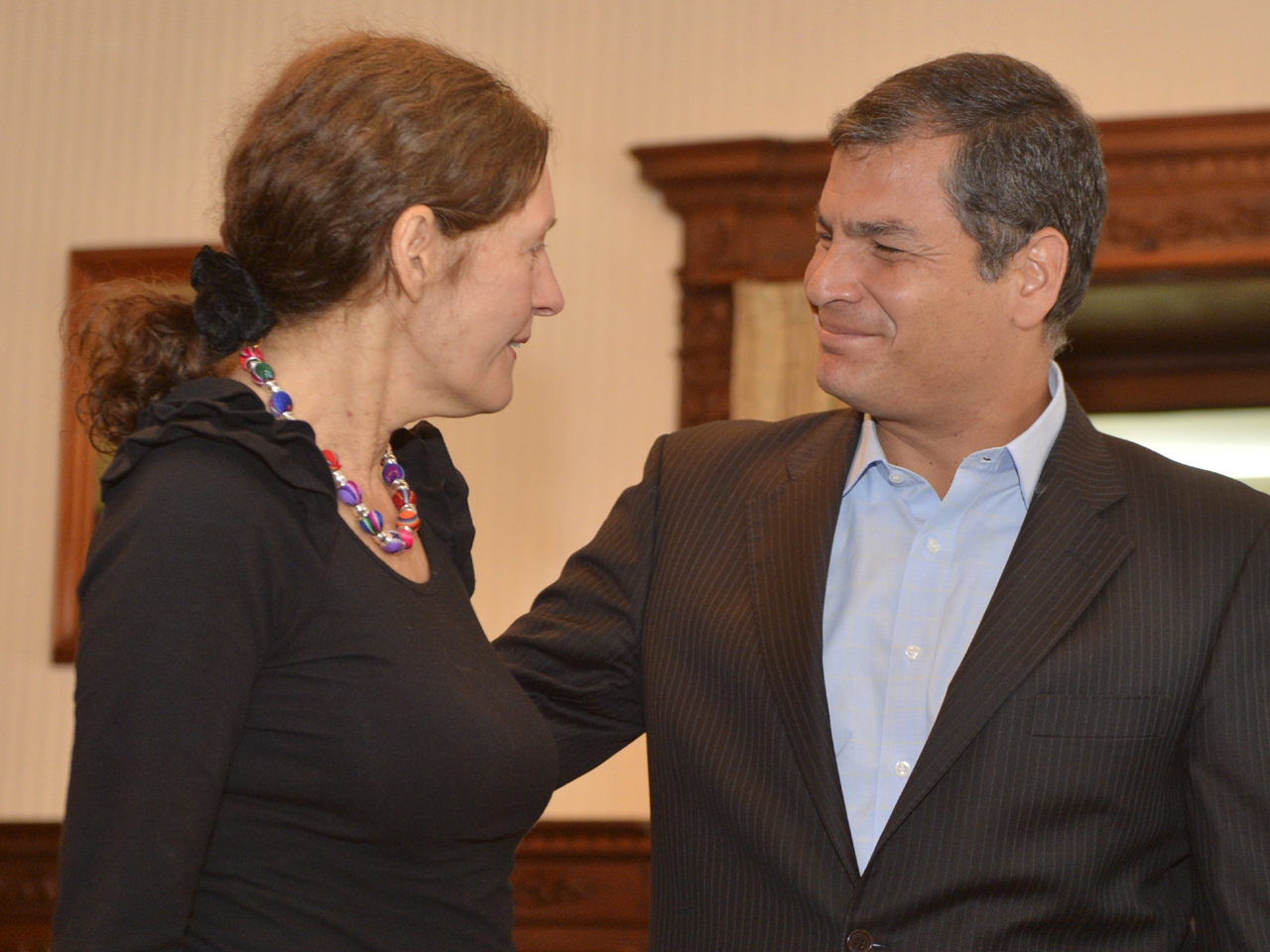 This story was filed by CBS News correspondent Monica Villamizar.

(CBS News) LONDON - It's become something of standing joke in diplomatic circles: How different Julian Assange's fate might have been if he had mistakenly knocked on the door just to right of the one he actually called at on the night of June 19, when he arrived at 3 Hans Crescent in London, seeking asylum.

The Colombian and Ecuadorian embassies sit side-by-side - their doors right next to each other - in a brick building adjacent to London's tourist-frequented Harrods department store. The two nations have virtually identical flags and office spaces, but totally different stances on foreign policy. Colombia is a staunch U.S. ally. Ecuador is not.

"Welcome to the club of those persecuted" by the United States, Ecuador's president, Rafael Correa, once told the Australian founder of WikiLeaks.

Once seen as the understudy of Venezuela's firebrand leftist leader Hugo Chavez, Correa has been trying to bolster his credentials and up his influence, especially among the cabal of left-wing governments in Latin America.

Defying what he calls "imperialist interests," Correa even boycotted the Organization of American States summit in a show of solidarity with Cuba, which is not invited to the "democratically elected leader's club".

"Nobody loves confrontation more than Correa," says analyst Michael Shifter, who believes the Harvard-educated president has painted himself as a victim of U.S. policy, and thus someone who can relate to Assange.

The world's best-known "hacktivist" took his case to the South American nation explaining that he feared political backlash from Washington for publishing thousands of secret U.S. documents on WikiLeaks.

Ecuadorian Foreign Minister Ricardo Patino announced his government's decision to grant Assange asylum on Thursday in Quito, but the bulk of his 40 minute news conference was dedicated to the explanation of that decision, during which he asserted that, "Assange would not have a fair trial" if extradited to the United States.

Patino went so far as to suggest that the U.S. government could treat him in a cruel and degrading manner. Miles away from his announcement, in London, there were cheers from Ecuadorians and Assange supporters who had gathered outside the embassy.

"We are not a British colony," they chanted.

It was a reference to the reminder from British officials that police could legally raid the embassy - even if it amounted to a breach of Ecuadorian territory. A provision within British law states that diplomatic immunity can be revoked in certain cases.

Correa was outraged, as were many of his countrymen. He called it a direct threat and took to Twitter to say his government would not be "intimidated" by Britain.

An Ecuadorian journalist, who asked not to be named, says this was all too convenient for Mr. Correa, who will be standing for reelection next year.

"Anti-imperialist stances are very popular in Latin America, especially when the country's sovereignty is perceived to be threatened," explains the journalist.

The argument that the U.S. and the U.K. are imperialist nations has served the charismatic Hugo Chavez well. He's insisted for 12 years that powers in the U.S. are poised to invade Venezuela, and his stance as a vehement defender of the Venezuelan nation in the face of this threat - be it fact or fiction - has helped to keep him in power and hugely popular for all those years.

In Ecuador, the majority view the government's move to grant Assange asylum positively, the journalist says - a bold move that shows the small South American nation isn't willing to be pushed around by bigger, more powerful nations.

The move will undoubtedly boost Correa in the estimation of his domestic supporters. It should be noted, however, that as the South American leader stands up for Assange's right to free speech, he has effectively censored - even shut down - media outlets that have spoken critically of him. He is only defending freedom of speech on his terms.

The core issue remains unresolved. Assange cannot physically get to Ecuador because Britain has refused to allow him safe passage. The director of Interpol, Ronald Noble, explains that the Australian national is now a fugitive, in the sense that he is failing to appear before a court of law, and will be arrested as soon as he steps outside the embassy. He can't leave by car, on helicopter, or on foot without permission from British authorities. In spite of his asylum, he is essentially a prisoner in the Ecuadorian Embassy.

Assange's supporters have vowed to take turns holding vigil outside the embassy, saying they fear British police will storm the building and capture the whistleblower in the middle of the night.

The entrance to the building will most likely remain guarded by London police. When asked how long the current situation will go on, one of the officers on duty shrugs his shoulders and replies, "as long as it takes".

In the meantime, with the Ecuadorean election looming on the horizon, the standoff isn't doing Correa any harm.