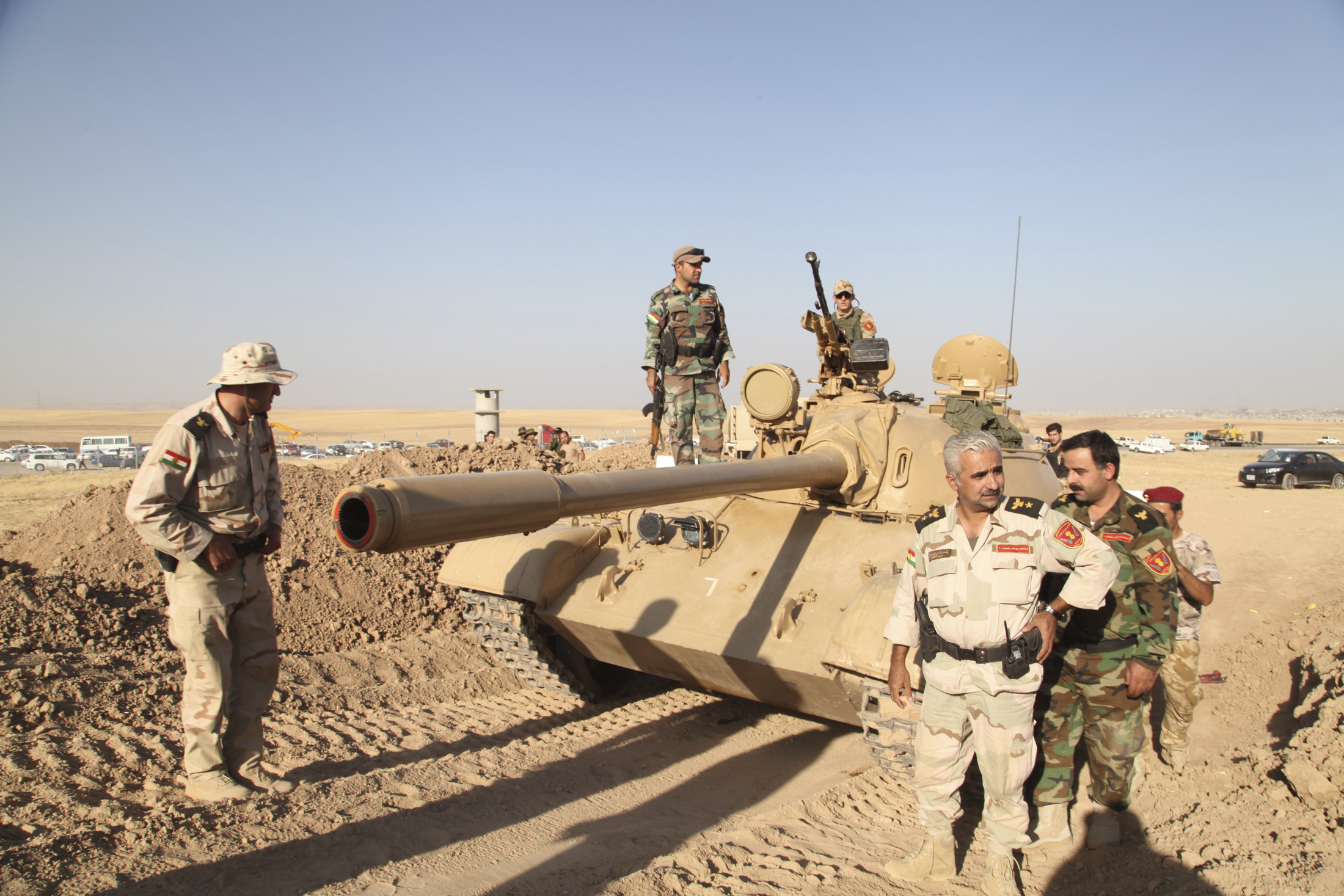 BAGHDAD - Kurdish forces retook two towns from Sunni militants Sunday a senior Kurdish military official said. The seizure of the towns was one of their first victories after weeks of retreating from the growing militant threat in Iraq.

The Kurds were helped by a fourth round of American airstrikes near Erbil intended to push armored vehicles used by the militant Islamic State of Iraq and Syria, (ISIS, also known as ISIL) CBS News correspondent Holly Williams reported.

The Kurdish peshmerga soldiers are the only ones still fighting ISIS on the ground and were able to push them out of the villages of Makhmour and al-Gweir, some 27 miles from Erbil, Brig. Gen. Shirko Fatih said.

The United States launched a fourth round of airstrikes Sunday against militant vehicles and mortars firing on Irbil as part of efforts to blunt the militants' advance and protect American personnel near the Kurdish capital.

U.S. warplanes and drones have also attacked militants firing on minority Yazidis around Sinjar, which is in the far west of the country near the Syrian border.

In the Kurdish capital on Sunday, the president of the semi-autonomous Kurdish Regional Government, Massoud Barzani, said American military support has been effective thus far, but, he added, peshmerga soldiers require more firepower to defeat the militants.

"The marching order is solidarity," Fabius said. He called on Iraqis to form a "government of broad unity so that all Iraqis feel represented and together lead the battle against terrorism."

A week ago, Al-Maliki ordered the Iraqi air force to support Kurdish forces against the militants, in a rare instance of cooperation between Baghdad and the Kurdish regional government, which have for years been locked in disputes over oil and territory.

Al-Maliki is seeking a third-term as prime minister, but the latest crisis has prompted even his closest allies to call for his resignation. A parliament session scheduled for Monday to discuss the election and who might lead the next Iraqi government was postponed until Aug. 19.

Meanwhile, thousands of Yazidi refugees fleeing the militants continued to pour across the border from Syria into Iraq after a weeklong journey through blazing hot mountains. Followers of an ancient religion with links to Zoroastrianism, the Yazidis said the militants had given them the choice of converting to Islam or dying.

Refugee Dhia Pauls told CBS News he welcomes the U.S. airstrikes, but believes they're not enough to save his home, or his country.

"I wish they come with the army back right here," he said. "They can take it over and we can live life. Better than this life."

As they crossed the border, many Yazidis said they had lost sisters, daughters, young children and elderly parents during the trip. They said militants sprayed gunfire at fleeing crowds, sometimes splitting up families by taking the women and killing the men.

An Iraqi minister said Sunday that the Yazidi lives ISIS militants have taken number in the hundreds.

"We have striking evidence obtained from Yazidis fleeing Sinjar and some who escaped death, and also crime scene images that show indisputably that the gangs of the Islamic States have executed at least 500 Yazidis after seizing Sinjar," said Iraq Human Rights Minister Mohammed Shia al-Sudani

It was not clear how many Yazidis were missing. In the span of 30 minutes, about a dozen displaced Yazidis approached one journalist, pleading for assistance to find their loved ones.

British officials estimated Saturday that 50,000 to 150,000 people could be trapped on Sinjar Mountain, where they fled to escape the Islamic extremists, only to become stranded there with few supplies.

Britain said its air force has already dropped water containers and solar lanterns over the mountains.

During his Sunday blessing at the Vatican, Pope Francis expressed outrage at the violence aimed at religious minorities in Iraq and called on the world "to stop these crimes."

He also spoke of "the destruction of religious, historic and cultural treasures."

In a statement issued Sunday, the European Union said it was "appalled by the rapid deterioration of the humanitarian situation, with hundreds of thousands civilians, mainly from minorities, fleeing the areas of conflict."

Some of the militants' acts "may constitute crimes against humanity and must be investigated swiftly, so that the perpetrators are held accountable," the EU said.