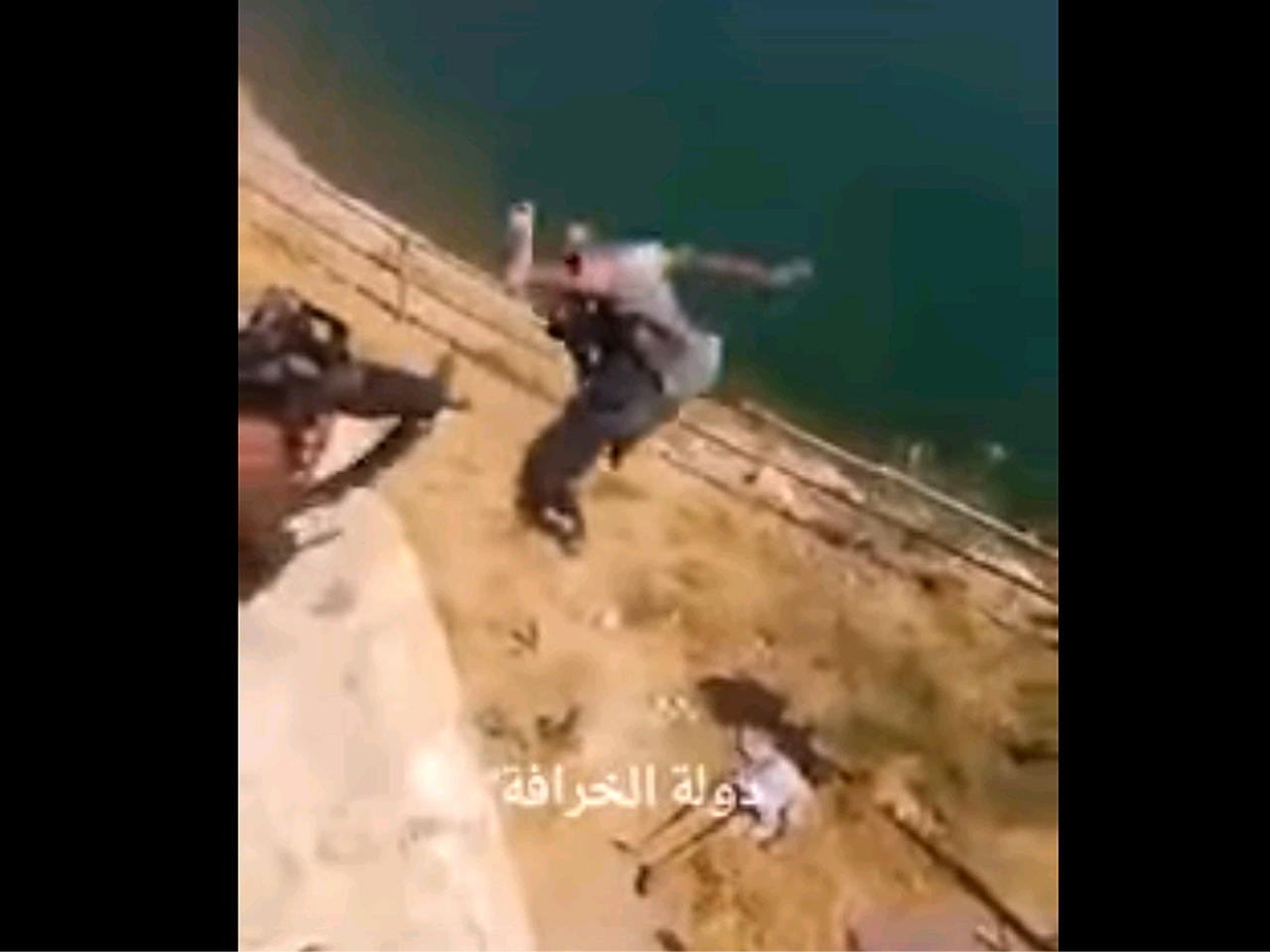 MOSUL, Iraq -- For one Iraqi lieutenant, the fight against the Islamic State of Iraq and Syria (ISIS) in Mosul has been a slow, methodical quest for revenge. For three years, he has hunted for two ISIS militants from his village who he believes killed his father. Along the way, he has shot to death detained militants after interrogating them, he acknowledges unapologetically.

And if he catches either of the men he is searching for, the lieutenant vows he will inflict on him "a slow death" and hang his body from a post in the village after forcing him to reveal where his father's body is buried.

That sort of thirst for vengeance in the wake of military victories is fueling extrajudicial killings of suspected ISIS members at the hands of Iraqi security forces in and around Mosul. Videos that emerged last week showed troops in Mosul taking captured ISIS suspects and throwing them one by one off a high wall next to the Tigris River, then shooting their bodies below.

Speaking to The Associated Press, four Iraqi officers from three different branches of the military and security forces openly admitted that their troops killed unarmed and captured ISIS suspects, and they defended the practice. They, like the lieutenant, spoke on condition of anonymity because they acknowledged such practices were against international law, but all those interviewed by AP said they believed the fight against ISIS should be exempt from such rules of war because the militants' rule in Iraq was so cruel.

However, the killings risk tipping Iraq back into the cycles of violence that have plagued the country for over a decade, according to Belkis Wille, Iraq researcher with Human Rights Watch. ISIS was able to attract recruits in the past because of people's anger over abuses, including arbitrary detentions, torture and extrajudicial killings, she said.

If abuses continue, "all you're going to see is (that) young Sunni Arab men are going to want to join whatever the next extremist group looks like," she said. Despite the military's vows not to tolerate it, she said no soldier or commander has been held accountable for any killings.

The bloodshed reflects the deeply personal nature of the fight against ISIS. When the militants overran Mosul and large parts of northern and western Iraq in 2014, they specifically targeted members of the military and security forces and their families for brutal atrocities. Near Tirkrit, ISIS massacred some 1,700 captured military recruits and buried them in mass graves that have been uncovered since. Hundreds of policemen and soldiers in Mosul are believed to have been killed after the takeover. Militants made no attempt to hide atrocities.

Defense Ministry's spokesman, Brig. Gen. Tahseen Ibrahim, said that authorities "have not registered any incident of revenge killing, whether carried out by security forces or residents. The situation is under full control and we will not allow such incidents to happen because this issue is very sensitive and leads to violent reactions."

But a senior Iraqi officer said his troops regularly killed men who were said to be ISIS among civilians fleeing the city at screening centers in and around Mosul. He spoke on condition of anonymity because of the possibility it could prompt legal repercussions.

"When an entire group of civilians tells us, 'This man is Daesh,' yes, we shoot him," he said, using the Arabic acronym for ISIS.

"When you're facing a man who has killed your friends, your family, yes, sometimes the men get rough," he added. "But for us, this is personal."

The lieutenant said the two men who killed his father were well known in his hometown, a small village south of Mosul. He agreed to share his story with the AP because he wanted to show how personal the fight is for Iraqi troops. Two of his colleagues confirmed his version of events. The AP is not revealing the names of the men he is pursuing because there is no way to confirm independently they belonged to ISIS.

The lieutenant said his father was an officer in the security forces who fought al Qaeda in Iraq, the predecessor to ISIS, in 2007, at the height of Iraq's sectarian violence. After ISIS seized the village in 2014, the tribes that were once kicked out for al Qaeda ties moved back in, and ISIS installed them in security and administrative positions.

According to the lieutenant, two men grabbed the lieutenant's father outside his home. The two were among those previously expelled for al Qaeda ties, he said.

The lieutenant was away, and his neighbors told him his father had been killed and who did it. He said he was told the men boasted about it in public. ISIS fighters also killed the lieutenant's uncle and more than a dozen other friends and relatives.

The lieutenant keeps an old picture of the two men on his phone. He said a handful of other troops know about his hunt and have helped him interrogate and kill ISIS suspects.

As Iraqi forces advanced toward the lieutenant's village last year in the lead-up to Mosul, he began interrogating captured ISIS suspects.

"Most of them I just asked questions," he said, "but for those who I knew had blood on their hands, I killed them on the spot."

He said he has killed more than 40 militants, whether in combat or in interrogations on the sidelines of the battle. He acknowledged most were not directly responsible for his relatives' deaths.

"I'm not selfish with my revenge, what I'm doing is for all Iraqis," he said.

Early on in the Mosul operation, he said he learned that one of the two men was in Tal Afar, a town west of Mosul that remains in ISIS hands, or had fled to Syria.

In early July, as Iraqi forces pushed into Mosul's Old City, he received a tip on the location of the second man. He said a colleague, an intelligence officer, called and said he was holding an ISIS suspect from the lieutenant's home town.

"I told him don't do anything, keep him there. I'm on my way," the lieutenant said.

The detainee was the uncle of the lieutenant's second target. The man was left alone with the lieutenant in a bare concrete room without a table or chair.

"I didn't torture him. I cut the plastic handcuffs from his wrists and gave him water," the lieutenant said. The man was elderly, with a grey beard and hair.

"He begged me not to kill him as I questioned him," he said, smiling. "He could barely walk (he was so scared)."

Eventually, the man told the lieutenant that his second target was alive and in Mosul's Old City.

"After I questioned him I sent him to hell," the lieutenant said flatly. He said he shot the man with his side arm and left his body on the floor.

The first reports of revenge killings appeared within weeks of the launch of the Mosul operation last year and continued throughout. But the government and rights groups do not have an exact number.

In June, Human Rights Watch said at least 26 bodies of blindfolded and handcuffed men had been found in dumped in government-held areas in and around Mosul. A month later, HRW said it had further reports of extrajudicial killings. Wille of Human Rights Watch said it was taking place "basically everywhere that is touched by this conflict" and by every armed force involved in the fight.

The military says troops have orders to hand any captured ISIS militants over for interrogation ahead of future trial.

Prime Minister Haider al-Abadi on Tuesday acknowledged that rights violations took place during the Iraqi forces' battle in Mosul but described them as "individual acts" by persons who were either "ignorant" of the consequences or who had struck a deal with Daesh with the intent "to defame us and the security forces."

He pledged the government would punish the perpetrators.

The lieutenant dismissed the idea of going to the courts, saying they are corrupt and suspects could bribe their way to freedom.

"I know some people believe that this kind of killing is wrong, but Daesh, they are not human beings," he said. "I am the one who still has my humanity."

When al-Abadi declared "total victory" in Mosul last week, the lieutenant said he believed his target is still in one of the last ISIS pockets in the Old City.

"I hope I find him alive," he said, "because I want to make sure he dies a slow death, not quick. I want him to tell me where my father's body is buried, and then I want to take his body and hang it from a post in my village."